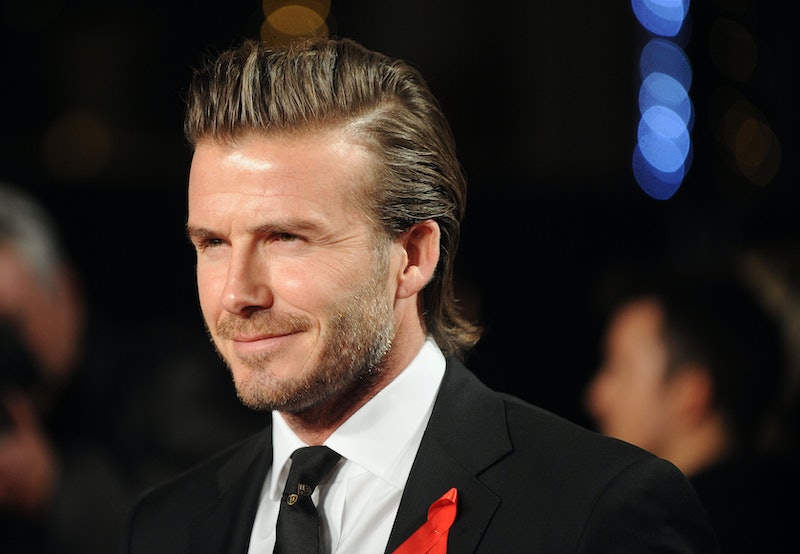 Getting asked to watch a shirtless ad of David Beckham in his underwear may be the best thing his fans have ever been asked to do. For David Beckham's H&M Super Bowl ad, a teaser of two potential commercial options was released, and fans will have until 11:59 p.m. on Feb.1 to vote for which one they want to air. Beckham first appeared in a sexy Super Bowl ad in 2012 to introduce is David Beckham Bodywear underwear line.

The full versions of both 30-second commercials, titled #Uncovered (ladies will pick, my small guess) and #Covered (jealous boyfriends who care) haven't come out yet, but the teaser has us poised and ready to hashtag. Frankly, since it's David Beckham, both hashtags should basically just be #Hot and #Hot, since he's running around in shirtless wearing briefs in both. Except in the #Uncovered one, he flies through the sky and may not be wearing underwear at the end... so that may be the clear winner.

"It was so exciting to work with one of my favorite directors, Nicolas Winding Refn, on my new campaign for H&M,” Beckham says in a press release. "Nicolas pushed me hard to create an action-packed film, which shows off this season’s new heritage-inspired bodywear at its best."

Yes. Heritage-inspired bodywear. Underwear. Abs. Whatever you want to call it, Beckham is definitely at his best. H&M also promises that both commercials will be "a high-octane ride with tantalizing views of Beckham in never-before-seen positions."

Never-before-seen? Does Posh Spice know about this?

Voting begins on Jan 29., and fans will be able to vote in H&M stores or online. And even though the Super Bowl only comes once a year (boo, I like the chance to combine wings, pizza, and pigs in a blanket whenever possible), you can gaze at pictures from the shoot for as long as you want.

You can watch the teaser of the commercial below: