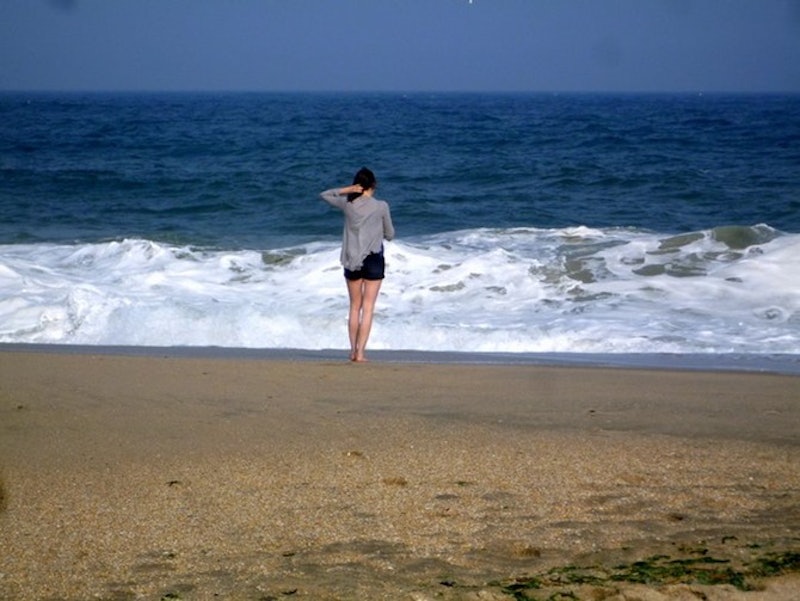 “You OK?” a boy asks me in the middle of consensual sex. His hands are firm on my hips, his breathing ragged in my ear. I turn my head to the side, twist my mouth into a grimace. He’s having trouble getting off, he tells me. He’ll finish soon, he promises. One quick thrust.

“You want to stop?” He says without pausing. There's a slight annoyance in his voice as he continues, “I’m really close.”

I don’t remember the feel of this boy’s hands, I don’t remember his caresses or kisses, I don’t remember the words he said to me before we started having sex. I do remember his heaviness pressed against me, the way he pinned me down by the very act of what we we're doing; his erratic, persistent, insistent movements, his loud pleasure and my pain. I remember speaking this quiet, muffled answer: “Kind of.” But it’s unclear — I will remind myself later, for days, for weeks, for years — what exactly I have said "kind of" to. It’s too noncommittal, and it’s too late.

“Just let me finish,” he says. “It won’t be much longer.” He hurries and then he comes. He's slumping on top of me, and though I'm not sure why, I’m starting to cry. When he sees me, he's angry. Why didn’t I tell him I was crying, and why didn’t I say I wanted him to stop? He feels weird now; he feels guilty. I have ruined this for him. I am always ruining things for him.

“I tried to tell you,” I say. I thought I did. Didn’t I? He's pulling on his clothes and observing me with disgust. I'm naked and confused, mascara-streaked and ugly, alone on a hotel bed. He tells me I don’t get it. Get what? I think, with desperation. I pull the covers to my chin. He’s already crossed the room. Get what?

I shower and I cry and I can’t figure out what it is that I’m supposed to get. When I emerge, we don’t talk about it. I never speak of it again.

Here’s a recent search in my Google history: “Is it rape if you ask to stop in the middle of having sex?” Yesterday, today, and in this very moment, girls on forums across the Internet are sending confused, desperate questions into the ether. “I didn't stop him,” one girl writes. “I just laid there silent until he stopped thrusting.” “Is it rape?” Another asks, her words urgent, awaiting someone, anyone, to validate her feelings about what has happened to her. "It started to hurt," she writes. "I told him to stop and he kept going."

“The first time he did it I did not give my consent, the second time I don't know why I asked him to have sex with me," another writes. "I don't know if it's considered rape anymore because of the second time." And then again: “Was it rape?” Girl after girl after girl asks in a million different ways. “Was it rape?” They ask strangers from across states, countries, and continents, hoping for confirmation from anonymous people who will never know their names.

Did you say ‘No’? Men and women alike want to know. If not 'No,' then 'Stop'? Had you already consented? How forceful was he? How forceful were you? How loud did you say it? Did he think you were kidding? Did he mishear you? Did he hear you at all? Did he get distracted? Was he unable to stop himself? Did he apologize after? Did you sleep with him again? Is this something you’ve done before? Are you the kind of girl who sleeps with strangers? Are you manipulative? Are you misleading? Are you a tease? Are you a slut?

“Between the abortion issue and a woman's ‘prerogative to change her mind’ at any given moment,” one angry, anonymous forum-goer writes, “people will eventually squeeze all of the natural enjoyment out of sex and reduce it to merely a legal act of business between two consenting parties.”

My rape is not rape to attorneys or lawyers or judges. And if another woman has gone through something like this, it might not be her definition of rape, either.

The Rape, Abuse & Incest National Network (RAINN) lets me know via their website: “It doesn’t matter if you think your partner means yes, or if you’ve already started having sex — ‘No’ also means ‘Stop.’ If you proceed despite your partner’s expressed instruction to stop, you have not only violated basic codes of morality and decency, you may have also committed a crime under the laws of your state.” Now I have to wonder if my scenario "counts" as rape. “Kind of” is not exactly expressed instruction. It is not a "No."

Recently, a friend and I were talking about our relationships, both past and present; the men who treated us well and the ones who didn’t. Maybe it was the influence of alcohol or the dim lighting of the dark bar where we stood, or maybe it was the safety of friendship. We began to open up. “I think,” she confided in me, "I’ve been raped at least twice by different men whom I’ve dated.” I told my friend that I was pretty sure I had been, too.

Later, we admitted to each other that we'd never said those words out loud before. These men raped us, but even as we spoke our truths, we wanted to push them back in, to quantify what happened to us in a thousand different ways. But with solidarity came acceptance. Then we said it one more time, just to be sure: “He raped me.”

My rape is not rape to attorneys or lawyers or judges. And if another woman has gone through something like this, it might not be her definition of rape, either. I’m not calling in a jury, and I’m not asking anyone’s opinion. "Rape" covers a multitude of experiences; it is gray and blurry and messy. In calling what happened to me “rape,” it now has a name that takes the responsibility off of me and puts it on someone else, regardless of whether that person goes to prison for it or not.

In defining my experience as "rape," I'm no longer to blame. This doesn’t change the fact that it happened, or the fact that there are still times — before sex, during sex — when I tense up in momentary fear that if I ask to stop, the person who I am with might not. What has changed is my strength in these moments. I am no longer scared to speak up. I no longer believe that anybody has the right to make decisions about my body for me but me, regardless of the situation.

To the girls who ask, Was it rape? I say this: Know that your experience should not be considered “normal” just because you didn’t think you could categorize it as "legitimate rape." Know that many people will look at rape in terms of black and white, "No" and "Stop." Be wary. Hold out for the partners who ask if it’s OK before they touch you, who ask and mean it, who in a moment of consensual ambiguity will pause the entire act until it becomes clear. Know that these people exist. Don’t let negative experiences prevent you from trusting someone.

Know that you can always say “No.” But if you’re scared, if you're unsure, if your mouth won't form the words because you're so overcome with emotion or because you don't know what he'll do to you if you say it, remember this: You didn't ask for it. It didn't happen because you were too drunk or too dumb or dressed too scantily. It happened because the person you were with was greedy and wanted to take something that wasn't theirs. If you couldn’t speak up then, speak up now. Be loud. Don't let anyone’s questions marginalize your feelings or your value or your beliefs or your pain. Feel it all.

More like this
Black Women's Equal Pay Day Highlights An Upsetting Problem
By Brandi Neal
The 19 Best Tweets & Memes About Bisexual Awareness Week
By Lexi Inks
Women Around The World Are Cutting Their Hair In Solidarity With Mahsa Amini
By Darshita Goyal
Breeding Kinks Have Been On The Rise Since Roe V. Wade Got Overturned
By Lexi Inks
Get Even More From Bustle — Sign Up For The Newsletter