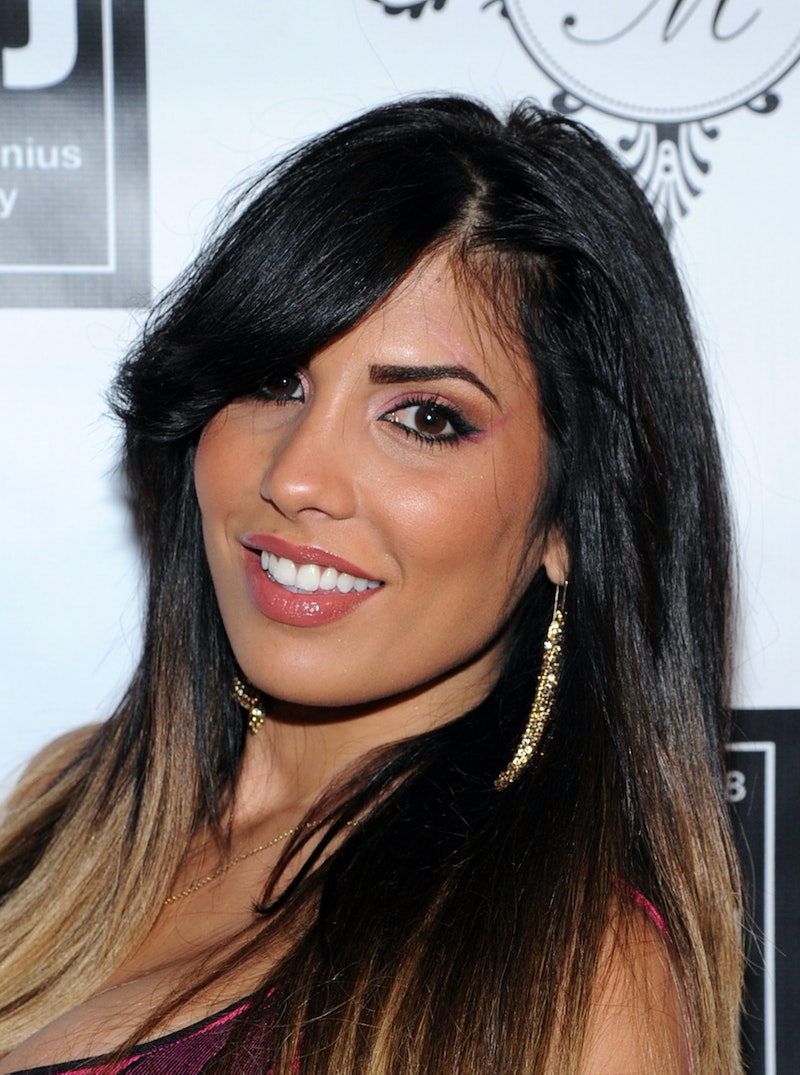 Get excited. Many of the ladies who appeared in the previous season of Mob Wives will appear in the upcoming sixth and final season of the show premiering Wednesday, Jan. 13 at 8 p.m. ET on VH1. These include Drita D'Avanzo, Renee Graziano, Karen Gravano, Carla Facciolo, and Angela "Big Ang" Raiola, all of whom have been with the series for the majority of its run. However, there is one cast member who will be noticeably absent from Season 6 of Mob Wives: Natalie Guercio. The fact that she won't be featured on the upcoming season of Mob Wives is bound to make me wonder what Natalie is up to today.

Of course, the fact that Natalie won't be on the show shouldn't come as a surprise to anyone. Natalie's final act on the series was leaving Renee's baptism party after she followed her friends thrown out by Renee out of the party at the end of the Season 5 finale. Though we all thought there'd be one mighty showdown between Natalie G. and Natalie DiDonato at the event since it seemed like the entire season was building up to one, there wasn't as Natalie G. just got in her car and blew that popsicle stand, probably never to be seen on Mob Wives again.

The other Mob Wives cast members seemed to be done with Natalie after that, and now that she won't be in the picture in Season 6, it looks like they have made good on that promise. So have things calmed down a bit for Natalie since leaving the show? Well... yes and no. Take a look at what Natalie is focusing her energy on these days, and yes, some of it is Mob Wives-related.

She's Focusing On Her Career

Now that Natalie isn't on Mob Wives, she can dedicate more time to her recently-launched organic haircare line, Hair on Fleeek. You read that right. There are three E's in the company's name. Like any good reality star, Natalie is using the fame she garnered on the show to peddle a product. Here's hoping she finds success that lasts longer than her time on Mob Wives.

She's Had A Couple of New 'Dos

And the fact that Natalie has created her own line of haircare products is kind of a no-brainer for her. The licensed and practicing cosmetologist has a knack for sporting some luscious locks, whether she's working the ombre trend on Mob Wives, rocking a fiery red coif, or going back to being a brunette. As the above Instagram pic shows, Natalie will have another new 'do to show off before we know it.

It looks like Natalie and London's relationship has withstood his brutal attack in December 2014 and all of the hate from some of the Mob Wives ladies to remain strong today. If they can make it through all of that, these two can probably make it through anything.

She's Having Fun With Her Son

And of course, one of Natalie's main priorities right now is continuing to raise her son Nunzio, who was born during a previous relationship. They grow up so fast even when they're not on TV, don't they?

She Has Made Nice With Big Ang

Natalie took this cute pic with Big Ang a few months ago, which seems to suggest that she's still tight with her former Mob Wives castmate today. Even right after the Season 5 reunion, Natalie had only kind words to say about Big Ang. “I love Big Ang,” she told RadarOnline in March 2015. “We have a relationship and a bond that nobody can break. I look up to her. She knows the BS that is going on and she doesn’t believe it.” But then again, who doesn't love Big Ang?

But She Still Has It Out For Karen

On the contrary, Natalie still has a beef with Karen. Earlier this month, Natalie poked fun at an unflattering paparazzi photo taken of Karen that was published in a magazine, as you can see in the tweet above. Will these two ever get along? I doubt it.

She May Have A New Project In The Works

According to the above Instagram post, it looks like Natalie had a meeting with MTV last month. Time will tell what it was all about, but having Natalie back on TV could certainly be entertaining.