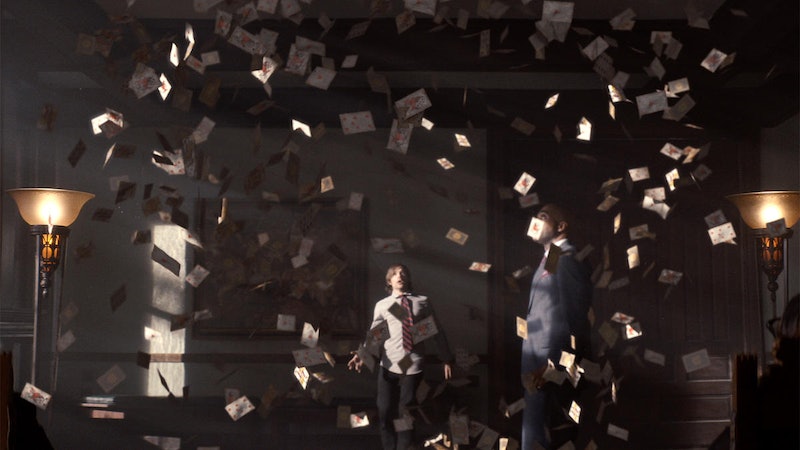 Fans of Lev Grossman's The Magicians trilogy will either be thrilled or terrified to hear that Syfy's small-screen adaptation of the series premiers on Monday, January 25. The Magicians tells the story of Quentin Coldwater, a neurotic, fantasy-obsessed loner who finds himself accepted into Brakebills, a college for magicians. Meanwhile, his childhood friend Julia is rejected from Brakebills and sets out to acquire her own magical education by whatever means necessary. Throw in a bunch of horny, neurotic fellow magicians and a Narnia-like fantasy world that needs saving and you've got a decent idea of what this show will look like. But! But. How does The Magicians TV show compare to the book?

Of course, the question isn't just whether or not the show will be good, but whether or not it will be true enough to the novels to satisfy fans. As a huge fan of the trilogy, I was worried that SyFy was going to take one of my favorite series and royally muck it up, which is the fear of any fan who watches their beloved novel become a movie or TV show. Luckily, I had the opportunity to view the first two episodes of the season and speak with a few members of the cast, and I'm cautiously optimistic about the show for a few reasons.

The Casting Is Pretty Spot On

Don't worry, Quentin is just as mopey and anxiety-ridden as fans of the series will expect him to be. "He is sort of an asshole, he is too selfish for his own good, but he is constantly fighting for the good in the world and inside of himself... it makes you hate him and root for him at the same time," explains Jason Ralph, the actor who portrays Quentin, in an interview with Bustle. Ralph is as fantastic as Quentin, perfectly embodying the characters more annoying tendencies (neurotic, privileged, infuriatingly self-centered) while still making the character sympathetic. Other cast stand-outs include Hale Appleman's spot-on portrayal of the snarky and flamboyant Eliot Waugh and Stella Maeve's obsessively determined Julia.

The Series Makes A Few Important (And Smart) Changes

Typically I would never suggest that a TV show or film could improve upon its original source material (blasphemy!), but The Magicians makes a few smart changes that I wouldn't have minded seeing in the book. The cast is older: rather than plucking our characters right out of high school, this Brakebills is a magical graduate school, putting all of our characters in their mid-20s.

There's also a great emphasis on Quentin's clinical depression, which is hinted at but never fully discussed in the novels. In the TV series, Quentin is being medicated for depression, and Ralph confirmed that this would play a role throughout the season. "There are definitely some episodes that come up that we explore it really head on... it's kind of sad and scary," he tells me. It's an interesting choice that I personally felt worked really well with Quentin's character, and I almost wish this had been included in the novels, as well.

The biggest change fans will notice is the inclusion of Julia's story line alongside Quentin's. We don't learn what Julia's been up to until book two, so it was a bit of a surprise to be thrown into her story so early. However, fans of Julia will be thrilled to see her character developed so soon, and watching Quentin's and Julia's plot lines side-by-side really showcases the differences in their experiences with magic. (Also, have I mentioned that Maeve is fantastic as Julia? Her Brakebills exit interview will make you cringe.)

The Beast Might Be The Best Part Of The Series

Our introduction to The Beast is preceded by a lackluster scene involving a spell gone awry, so I wasn't expecting too much from the first episode's final scene. The Beast is an odd character in the book series, described as a man in a suit with a branch obscuring his face, and could have been portrayed as ridiculous and not particularly terrifying. Lucky, this Beast is bizarre, gruesomely violent, and easily the best part of the first two episodes. As long as The Beast is around, I'll continue watching this season.

The Cast Are Mega-Fans Of The Novels

It seems cliché to gush about how passionate the cast is about the show, but I was honestly surprised to hear how enthusiastically they spoke about the book, and the responsibility they felt in regards to playing their characters faithfully. Hale Appleman, who plays Eliot, started reading the books at the suggestion of a friend when he originally auditioned for the role of Penny. "I started reading the books and I read Eliot and I felt pretty connected to him and just found him really amusing and complex and really fascinating... I started reading the books as the auditions were happening and they really informed my auditions for him," Appleman says. Likewise, Ralph mentioned that he's a huge fan of the novels and keeps the books on set with him. It's easier to feel optimistic about a show when you know some of the leads are fanboys of the series.

Of course, there were elements of the show I wasn't crazy about (and be warned, the first two episodes can be a little confusing for those who aren't well versed in the novels), but overall I was decently pleased with the series. This is one fan who will definitely keep watching.