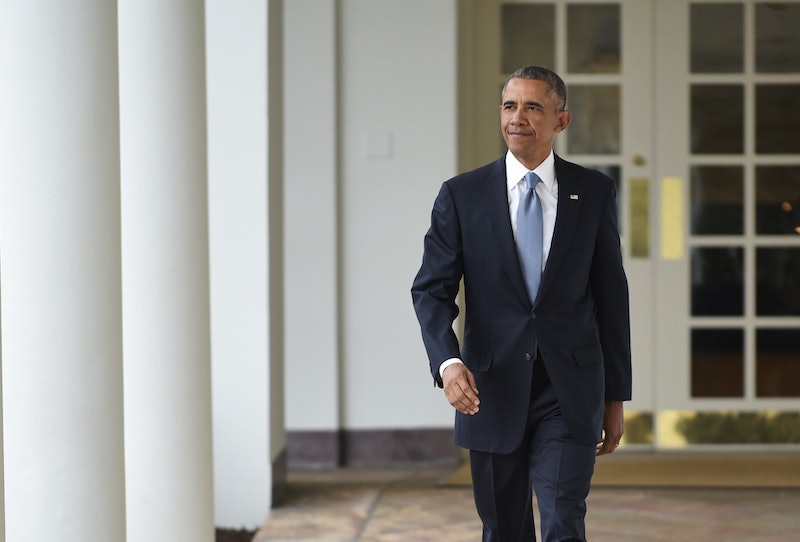 On Tuesday night, President Obama delivered his final State of the Union address, highlighting all of the expected issues, including immigration, the economy, and climate change. Throughout the speech, he focused on the impact that his priorities and the progress we've made during his presidency can have and have had on American families. Going along with this call to help American families prosper, Obama addressed the pay gap early on in his SOTU speech, and he hinted at how he will work to improve it in his final months as president.

But tonight, I want to go easy on the traditional list of proposals for the year ahead. Don’t worry, I’ve got plenty, from helping students learn to write computer code to personalizing medical treatments for patients. And I'll keep pushing for progress on the work that still needs doing. Fixing a broken immigration system. Protecting our kids from gun violence. Equal pay for equal work, paid leave, raising the minimum wage. All these things still matter to hardworking families; they are still the right thing to do; and I will not let up until they get done.

What's interesting about Obama's intro is that he positioned equal pay — often considered a gendered issue (as in, the equality of pay needs to be brought to women) — as one of many economic issues he hopes to emphasize through his work. There was no specific mention of the often recited statistic that women make 77 cents on the dollar when compared with men. In fact, the words "woman" and "women" were seldom — if ever — used in his address.

There's no doubt that Obama has made progress on women's issues during his presidency. With his healthcare reform legislation, Obama made it easier for women to get and afford health insurance, eliminating the "pre-existing condition" of being a female. As for the pay gap in particular, he has supported legislation that gives women legal remedies if they're suffering from wage discrimination because of their gender. His simple way of referencing the pay gap on Tuesday night, though, may just be the step the women need in order for the conversation about equal pay to continue.

Obama did not harp at length on the gap in pay that many women experience compared with men. That gap has long been contested — not because it doesn't exist, but because it may have more to do with the choices women are often expected to make compared with men. Still, it's a fact that women often earn less than men overall — but rather than getting into a partisan conversation mired in controversy, Obama seemed to keep the conversation squarely on economics. He referenced the need to close the pay gap ever so briefly in the quote above, and then he went more in-depth later on into the changes that can be made in the economy to help American families support themselves and one another better.

Sure, the address could have used more of a focus on women's issues. But Obama's intro to the State of the Union seemed to say, "I know that the pay gap is an issue, and I'm going to work on it." What's more, he categorized it with other economic issues, like raising the minimum wage, giving it credibility as more than just a women's issue.