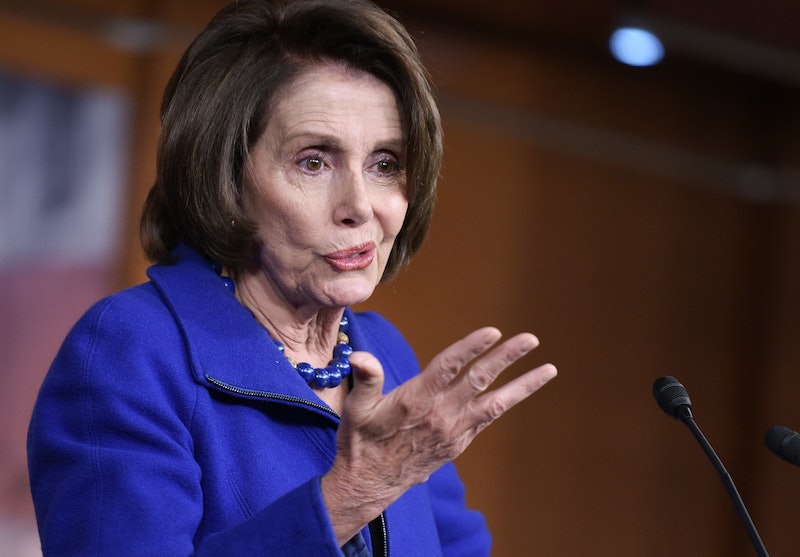 If during Tuesday night's State of the Union you felt a little sleepy and started to wonder when it would wrap up, you weren't alone. The Minority Leader of the United States House of Representatives was right there with you. Nancy Pelosi checked her Apple Watch during President Obama's SOTU address, and she happened to do so right as the camera found her. It was awkward. It was also the best.

Obama started off his speech by claiming he'd keep it quick, but apparently, it wasn't quick enough for some people. Cough, Nancy, cough. He joked, "Tonight marks the eighth year I've come here to report on the State of the Union. And for this final one, I'm going to try to make it shorter. I know some of you are antsy to get back to Iowa." The White House said prior to the event that it would be one of his shortest addresses, and clocking in at just over an hour, you can't really complain. Heck, there was even a semi-Friday Night Lights quote! Come on, Nance. Have a heart, and check your heart rate on your Apple Watch later. Or your steps. Or whatever else cool stuff that wearable tech does.

People on Twitter, of course, were quick to call her out.

Those Who Loved It

So, What Was She Really Doing?

A good theory, but she only sent one.

Sorry, Nance, but you were busted.

More like this
25 Things I've Reduced My Life To, In Addition To WFH In My PJs
By Ginny Hogan
7 Things We Learned From Rebekah Vardy's First Post-WAGatha Christie Interview
By Sam Ramsden
What We Know About Where Caroline Watt Is Now
By Catharina Cheung
New ITV Drama Maternal Is Lifting The Lid On Life As A Woman In The NHS
By Catharina Cheung
Get Even More From Bustle — Sign Up For The Newsletter