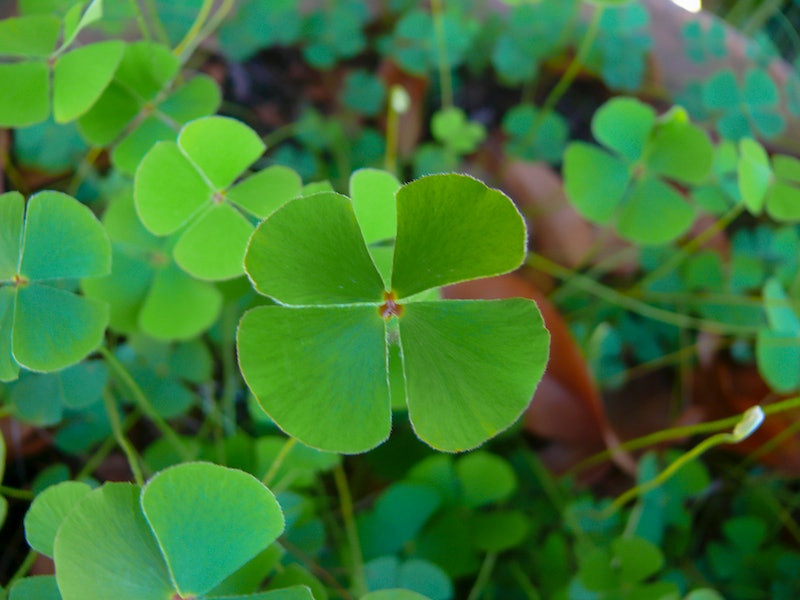 Are you a lucky person? Are you the type who finds the winning Powerball numbers, strikes up a conversation with the dude who turns out to be a hidden billionaire looking for somebody to adopt, or discovers a vintage Dior hidden in a thrift shop pile? Or, on the flip side, are you the kind of person that luck passes completely by? It turns out, according to psychological research, that quite a lot of luck is in your head, and not just random chance dictated by the world. You can, in fact, make yourself into a slightly luckier person — which seems to go against the entire point of luck's randomness. So how on earth do you transform yourself into a kind of magnet for good fortune and opportunities to rain from the heavens?

The rational perspective on achievement in the world is that it's a product of hard, solid work. (Oprah, for example, doesn't believe in luck.) But that doesn't explain how many people seem to get their rewards by a combination of grind and sheer happenstance. Even the Nobel Prize-winning psychologist Daniel Kahneman (whose work is all about decisions, judgements, and other deliberate acts) attributes a lot of his success to "sheer luck". Hell, I got both this job and my husband because of random meetings at parties.

But it's not an illusion: some people really are luckier than others. And psychology has some hints about how that works. Here are six traits of lucky people, according to science.

The big daddy of luck and psychology is the psychologist Richard Wiseman, who's done extensive studies on what lucky people do differently. It turns out that luck is as much a matter of mindset and openness as it is stumbling on the right thing at the right time. Psychology Today reports that some of Wiseman's findings are more about who you are as a person than whether you were born under Madonna's Lucky Star, and they actually make a lot of sense.

For one, people who experience a lot of luck are extroverts, with large social groups and no fear of social interactions. They score highly on general tests of outgoing personality and enthusiasm. This sort of personality type increases the likelihood that they'll have fortuitous conversations or strike up acquaintances with people that turn out to have "lucky" consequences.

Wiseman's research also found that extroverts with lucky experiences tended to exhibit open, pleasurable body language when encountering others, drawing them in and making them more inclined to form a social connection or make an advantageous offer. (Open, "positive" body language means relaxed, uncrossed limbs, open palms, and facing the other person face-on.)

Lucky people also grab opportunities and say "Yes": it's now a commonplace in studies of serendipity to point out that opportunities tend to follow much more from taking risks and agreeing to unexpected proposals than from caution.

Wiseman's research also found that positive expectation was a fundamental part of experiencing luck. In other words, people who genuinely believed that good things would happen to them tended to encounter more good fortune. This sounds like utter loopy mumbo-jumbo, but the science bore it out: his subject surveys indicated that people who were often unlucky believed much more firmly that bad events would happen to them in the future than lucky people, who tended to focus on the likelihood of positive events. This, Wiseman acknowledges, is bad news for people with depression, who are experts on putting a"negative spin" about their future and potential.

One of Wiseman's most famous experiments involved a newspaper and a set task: count how many photographs appear inside. The trick, however, was that on the second page of the newspaper, Wiseman had planted a large advertisment reading "Stop counting. There are 43 photographs in this newspaper." Of his 400 participants, the ones who regularly said they experienced luck identified and read this message within two seconds; the ones who were unlucky didn't see it, and continued to count the photographs.

Wiseman points out that this isn't a matter of stupidity, but of focus. Openness is not just a social capability, but an approach to tasks in general. "Unlucky people miss chance opportunities because they are too focused on looking for something else," he told The Telegraph newspaper. Being too task-oriented, in this sense, is actually a bit of a disadvantage, because it can distract from other opportunities that arise along the way.

Fast Company, in its review of Wiseman's research, makes the point that today's workplace culture doesn't actually encourage luckiness in employees: we're trained to believe that "setting a goal, single-mindedly pursuing it, and ploughing past obstacles" is a virtue, while Wiseman makes it clear that it may actually represent a block to new opportunities.

Wiseman proved pretty conclusively that people's belief in their own luck seemed to sincerely influence the luck that happened to them. And it seems that lucky charms may also give a bit of a performance boost; if you truly think you have the golden ticket, you may do better at things involving skill and personal effort.

A 2012 study of the whole lucky-charm effect from the University of Cologne gave amateur golfers on a putting green one ball each. One set of golfers were told they had a "lucky ball," while the other weren't told anything. Those with the "lucky ball" sank, on average, 6.4 putts out of 10, while those with the normal one averaged 35 percent less success. It seems that if we're told that luck be with us tonight in a competition, we sincerely believe it and our performance reflects the influence.

But that's only in areas where we're in control. Elsewhere, superstition and ritual are comforting, but they won't have any effect on the real-world implications of, say, a giant lottery win. And, as every football team knows, you may believe you have all the lucky rabbit's feet in the world, but the other team likely believes it as well — so it likely doesn't do much to help you out.