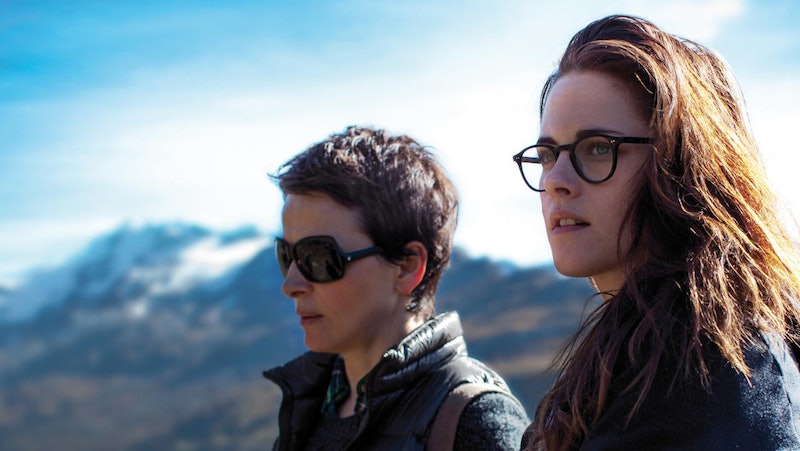 Even with her other credits, does the shadow of Twilight and Bella Swan still hang over Kristen Stewart? Possibly, since when nominations were announced on Thursday morning, the 2016 Oscars snubbed Stewart for a Best Supporting Actress Oscar nod. Instead, Jennifer Jason Leigh (The Hateful Eight), Rooney Mara (Carol), Rachel McAdams (Spotlight), Alicia Vikander (The Danish Girl), and Kate Winslet (Steve Jobs) make up that category. Many critics and bloggers had Kristen Stewart on their longshot list for her performance in the festival darling drama Clouds Of Sils Maria. She co-stars with Juliette Binoche and Chloë Grace Moretz in the film, a character-driven piece about an aging actress faced with her fading relevance, the generation replacing her, and an intimate and tense relationship with her personal assistant.

Stewart racked up festival cred and regional critics circles nominations in her role as Valentine, American assistant to Binoche's French movie star, Maria Enders. The César Awards, IndieWire Critics Poll, National Society Of Film Critics all named Stewart as their pick for the Supporting Actress of the year. (She's the first American to win a César in any field!) But the Golden Globes' failure to recognize Stewart foreshadowed the Oscar oversight. Kate Winslet was awarded the Globe for her performance in Steve Jobs, besting fellow nominees Jane Fonda (Youth), Jennifer Jason Leigh, Helen Mirren (Trumbo), and Alicia Vikander (for Ex-Machina, not The Danish Girl).

The film's inability to campaign at the level of a major release like Steve Jobs or The Hateful Eight probably contributed to Stewart's snub. Clouds Of Sils Maria grossed just over $1 million in the United States, which is likely why her work as Valentine may be the best Stewart performance most of her fans haven't seen. While it's nice to dream that every voting member of the Academy diligently watches every eligible film before sending in his or her ballot, the truth is that word-of-mouth and visibility contribute more than they should. That means that a highly praised performance in a small, foreign-made art film like Clouds Of Sils Maria can be overshadowed by work in a release with more marketing dollars and studio power.

Meanwhile, Stewart's co-stars are confident that Clouds won't be the last film to put her in heavy awards contention. Binoche told IndieWire of the actress, "I think she has an amazing career in front of her, and she's gonna surprise us." Stewart herself has no qualms over sacrificing high-profile gigs for compelling work. She told IndieWire why films like Clouds Of Sils Maria appeal to her over a lot of the cookie-cutter Hollywood scripts coming her way:

Probably just that they’re fairly archaic, boring, previously consumed ideas of what a woman can be in a mass-consumed story. I’ve done a lot of independent, smaller things recently that usually don’t lack interesting stories to tell about women.

The Academy didn't make room for Stewart in the Supporting Actress category this year, but the actress doesn't seem too concerned with courting nominations. Besides, she's got plenty of opportunities to wow in the years to come.