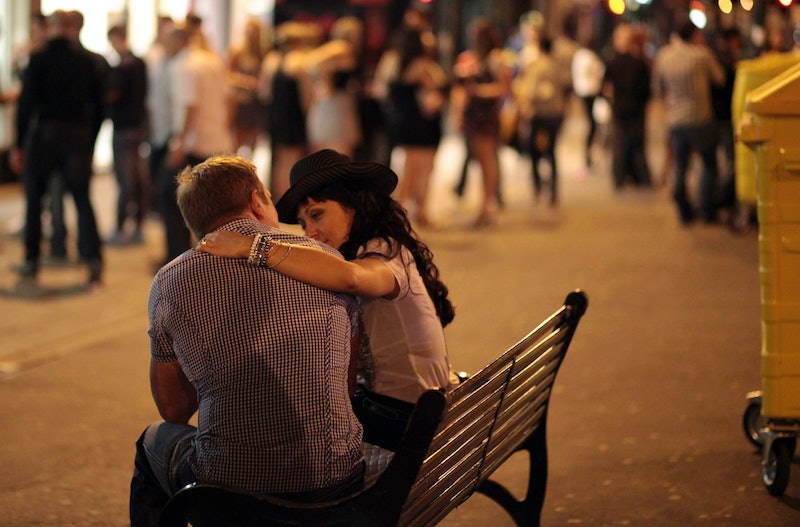 First dates are the worst; you're anxious, stressed, worried, and you feel the need to check if there's food in your teeth every five minutes. This is all worth it if you have a great connection, but having to sit through dinner with a bad-habit dater will make you question why you thought you wanted a boyfriend in the first place. Everyone has their personal pet peeve when it comes to dating, but apparently taking a smoke break is the worst first date behavior there is, per a recent Match.com survey. The study also found that 89 percent of people would prefer not to date a smoker at all. Single smokers, I think you finally found some motivation to quit.

Only 19 percent of adults admit to being smokers, so thankfully this dating behavior isn't all too common. With the percentage being so low, it's surprising that the population surveyed didn't take more offense to other bad dating habits — taking a smoke break was ranked above checking your phone and arriving late, with 51 percent of those surveyed saying it is the worst offense. Though the people of Match.com have spoken, these other bad date behaviors definitely rank high on the most offensive list, according to me.

I can understand picking up the phone when your mom is calling repeatedly (what if something happened??), or when you're waiting to hear if your sister had her baby, but do not — DO NOT! — scroll through your Facebook timeline or look up Vines of dancing cats while your date is talking. It's rude to do this with your friends, so doing it on a date is an ultimate no-no. Once a relationship is established you can occasionally get away with a "Babe, I'm just checking the score," but until then, leave your phone in the car.

...Especially if you're meeting your date somewhere. Don't force them to sit at the bar and engage the bartender in a sob story about how their date stood them up only for you to arrive a half hour later with a half-assed apology.

There is nothing more horrifying than going out with someone for the first time only to realize they already have set your wedding date. It may have been love at first sight, but the only future plans you should be discussing on date number one is if there's going to be a date number two.

Slurring your words and getting handsy is the worst way to impress a date. If this is how you want your whirlwind romance to begin, take yourself to the nearest college bar.

5. While we're on the subject of drinking...

... never, ever crack open a beer in the car while you're driving yourself and your date to a local bar. This may sound ridiculous, but IT HAS HAPPENED, people. Take it as a warning sign that this may possibly be the worst human being you have ever encountered (not that I'm projecting or anything...) and run as fast you can.

Though navigating the dating scene can make becoming a cat lady sound extremely appealing, don't give up after one (or ten) bad dates. There ARE some special unicorns out there who don't engage in this behavior.