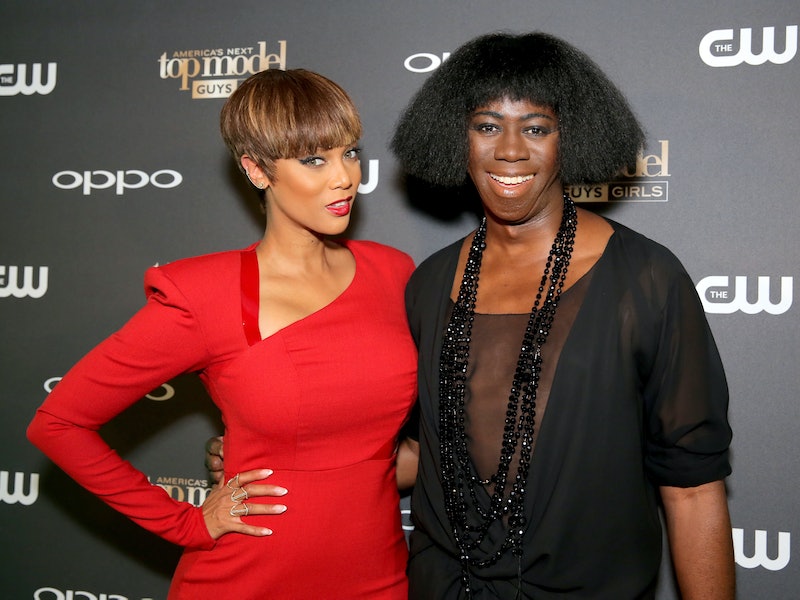 Stop crying and dry your eyes, everyone who's been sobbing since the cancellation of everybody's favorite modeling show — America's Next Top Model has been picked up by VH1. Just a little proof that there is a god, and she is smizing benevolently down at us right now, honey. As I'm sure we all remember, because the trauma has scarred our nightmares, ANTM was cancelled in October 2015 after an insane 22 seasons on The CW. But, now, your knight in shining armor VH1 is galloping in to save the day and ensure that we haven't seen the last of young women crying over their makeover haircuts. Bless.

The one thing that's still up in the air about the move to VH1, however, is whether its forever-host Tyra Banks will be coming along with the show. She's been at the helm since the beginning, but there are persuasive arguments on either side for why she may or may not return. On the one hand, many speculated that the reason America's Next Top Model was cancelled in the first place was because allegedly Banks' salary became too high to make it profitable, according to "an insider" speaking to Confidenti@al:

The CW canceled [ANTM] even though it was their most downloaded show, but the speculation was that it’s because Tyra’s salary is so high. It's an expensive show to make because she gets a s**tload of money.

And if that rumor is in any way true, the fact that VH1 made the move to scoop ANTM up suggests that something had changed to make the show more attractive — like, perhaps, Banks' departure and the opportunity to hire a more budget-friendly host. Or, if that rumor is nothing but a rumor, there's the fact that Banks' show FABLife folded after just two months, so she has plenty of free time. In the words of Confidenti@l's insider (which I imagine coming along with a healthy dose of very suspicious side eye), "She said it was time for ‘Top Model’ to end but her show bombed and now [ANTM] is getting picked up again."

So who knows what will happen? Whether we get Tyra Banks back, or someone new and equally awesome, the important thing is that we're getting more episodes of this classic, for all our marathon-watching-while-cleaning-your-apartment-on-a-rainy-Saturday needs. Or is that just me?

More like this
Tyra Banks Flubbed The Name Of Charli D’Amelio’s Boyfriend On 'DWTS' Bond Night
By Jake Viswanath
15 Piping Hot Behind-The-Scenes Secrets From 'Great British Bake Off'
By Emily Dixon and Darshita Goyal
What’s New On Netflix: Ana De Armas’ 'Blonde' & A Nick Kroll Special
By Arya Roshanian
What’s New On Netflix: Meet 'The Real Bling Ring'
By Arya Roshanian
Get Even More From Bustle — Sign Up For The Newsletter