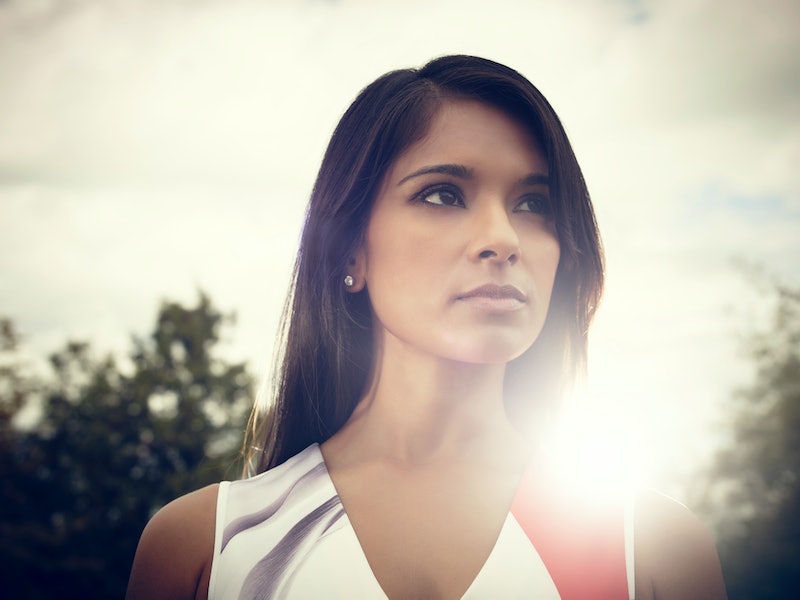 If you're a Greek and Revenge fan, then you recognize Dilshad Vadsaria for bringing to life Rebecca Logan and Padma Lahari, respectively. Well, now Dilshad Vadsaria is portraying Mary Goodwin on Second Chance , FOX's newest drama that was formerly named The Frankenstein Code and Lookinglass . It follows Rob Kazinsky as lead Jimmy Pritchard who is, you guessed it, given a second chance at life by transforming into a younger and stronger version of his former 75-year-old self. However, the series is so much more than that, especially thanks to Vadsaria's role as the powerful Mary, who is not only the founder of a multi-billion dollar biotech company, but is also fighting for her life after being diagnosed with cancer.

"She is extremely intelligent," Vadsaria tells Bustle about why she admires Mary. "She is extremely caring [and] compassionate. She's not this sort of stereotype that you would have in regards to what the CEO of a huge company would be." There's no doubt that Mary speaks her mind when it comes to her opinions, her company, and ensuring that twin brother Otto Goodwin (Adhir Kalyan) is taken care of.

Mary is a force to be reckoned with, but it's important for Vadsaria that rather than viewing her as a typical business leader, audiences see the character as someone who is strong while holding humanity close to her heart. "What I love about her is that she's not a stereotype," the actor says. "She's this three-dimensional character that you really get to see as the episodes unfold. I love the humanity in her. I love that she's powerful without having to throw it around. I think if you're that bright and that intelligent and that powerful, you really don't need to explain it. It's just there."

Mary's company isn't the only thing she's in charge of, either. She also acts as a mother to her brother, Otto. Since losing their parents, Mary's been the main figure in his life. "Her brother has been her responsibility as they've grown up," the 30-year-old star says. "They lost their parents when they were extremely young. She took on the role of not just being his twin sister, but really this motherly role as well. Otto can't communicate with the outside world. It's a heavy, heavy responsibility to take on, which she's done gracefully up until now that she has cancer."

Surely, all of that will soon enough weigh heavily on Mary, but maybe she'll get a second chance at life, too, just like Pritchard. The audience will have to wait and see. But Vadsaria does reveal that second chances are the one thing all viewers will relate to in the series. "It's such a human story about family and relationships, and holding close to what you have, and really reevaluating what you're doing in life, and how you would do it differently or better, because I think we can always better ourselves," she says.

She also wants others to know that even though Second Chance is set in this "sci-fi world and it can seem like it's over-the-top," there's more to it than that. "It's so grounded in that aspect of storytelling that I feel like people will really be able to connect to it," she promises. "I really want people to connect to the human aspect of it."

If that doesn't persuade you to watch, maybe this will. There just might be some Frankenstein references. For example, Vadsaria says that her character's name probably isn't a coincidence. "Rand Ravich, our showrunner, is so bright and so brilliant," she says. "He has a very quick-witted sense of humor and he is just extremely like a zinger with his intelligence ... Mary Goodwin was her maiden name until she became Mary Shelley." If that second name sounds familiar, it's because Mary Shelley is the author of Frankenstein.

Between this powerful female character, references to a classic novel, and Vadsaria's performance, Second Chance shouldoffer everything you'd want from a TV series when it premieres on Wednesday night at 9 p.m.