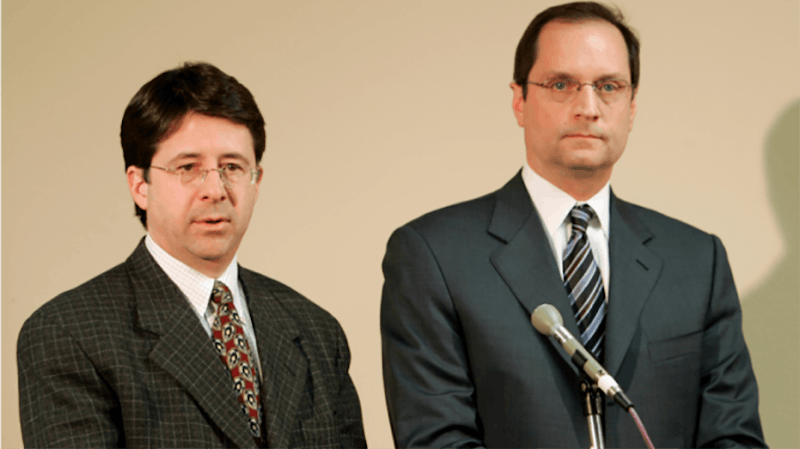 It may be difficult to find justice in the world today, but there seems to be no shortage of people who are fighting to make the world a just and fair place. Making A Murderer is dedicated to a possible oversight of the criminal justice system, but it also features two upstanding lawyers whose passion for the case goes beyond a paycheck — Steven Avery's defense attorneys Dean Strang and Jerome Buting go above and beyond to investigate the murder of Teresa Halbach. These lawyers' quest for justice is very reminiscent of another famous lawyer, Atticus Finch.

There are of course, a few major differences between Finch and the combined powers of Strang & Buting. Firstly, that Finch is a fictional character. Second, that while we may know the truth about Finch's client's innocence, we cannot be so certain about Avery's claims of innocence. But in their approach to seeking truth, whatever that truth may be, all three lawyers believe in the honest and fair applications of justice and work tirelessly to uphold that principle. Again, I'm not here to claim that Avery isn't guilty of the crime for which he was convicted, but here are some pretty big crossovers in Buting, Strang, and Finch's words and viewpoints. The following quotes prove that the spirit of Atticus Finch is alive and well in Dean Strang and Jerome Buting.

Dean Strang: "The court knows, I know. Perhaps some in the public or some in the media even have forgotten that he's innocent. As he sits here today, he is legally presumed innocent. I mean, we can dress him up in something that makes him look like he jumped off a Monopoly game board or something. He's a 'get out of jail free' card come to life. But he's innocent."

Atticus Finch: "Link, that boy might go to the chair, but he's not going till the truth's told...And you know what the truth is."

Jerome Buting: "Some might think, 'Well, you know, we... Our hands were tied.' You know? That you got a client who's saying that he's being framed. Publicly, that's kind of the defense you'd better go with or you're contradicting your own client. But it really wasn't that way here. It... The defense was raised because we think the evidence pointed that way."

AF: “Simply because we were licked a hundred years before we started is no reason for us not to try to win.”

Being a defense attorney is a thankless job, and opens up a great struggle to push back against people's pre-determined beliefs. However, Buting and Finch both recognize that it's not worth it to enter a fight that you're expecting to lose.

On Perception of Guilt

DS: "Whatever his personal failings here, there have been a series of systemic failings that are... deeply troubling if you... think about them too much or... take them personally. You know, I'm not sure that I'm... doing fully what I should be doing when I'm worrying about... whether other people who are not in my charge are... um... being ground up and spit out by this system. Or being treated unjustly."

AF: "She did something that in our society is unspeakable: she kissed a black man. Not an old Uncle, but a strong young Negro man. No code mattered to her before she broke it, but it came crashing down on her afterwards."

Their views here reflect their opinions of a justice system they they believe doesn't look past the surface of a person.

On The Inherent Human Flaws That Can Complicate Seeking Justice

DS: "Human endeavors are muddy, they are imperfect by definition, and a chase for the truth in a criminal trial can be vain. Justice, it seems to me, is staying true to the set of principles we have about what we do when confronted with uncertainty about the truth."

AF: "The one place where a man ought to get a square deal is in a courtroom, be he any color of the rainbow, but people have a way of carrying their resentments right into a jury box."

Strang and Finch both know that it's possible that the faults of humans that lead to crime can sometimes end up being the same faults that guide those charged with determining justice.

AF: "if you can learn a simple trick, Scout, you'll get along a lot better with all kinds of folks. You never really understand a person until you consider things from his point of view... until you climb into his skin and walk around in it."

Strang and Finch both preach empathy to those inside and outside of the criminal justice system — believing that the world would be better if we all just understood each other a bit better.

AF: “I wanted you to see what real courage is, instead of getting the idea that courage is a man with a gun in his hand. It’s when you know you’re licked before you begin but you begin anyway and you see it through no matter what. You rarely win, but sometimes you do.”

Despite the difficulties of attempting to find out for sure whether or not Avery is innocent, Buting and Finch believe in justice so much that they are willing to risk their own names in order to make sure they've checked every possible piece of evidence.

While all of three of these lawyers lost their cases, their pursuit of justice never wavered. Atticus Finch serves as an inspiration to all those who read his tale and wish to be as moral and honest as he strove to be. Atticus Finch, however, is fictional. Now it's known that good, honest lawyers aren't reserved for fiction. Strang and Buting are real, and whether they are right to believe Avery's claims of innocence or not, they're still fighting the good fight.Image: Netflix