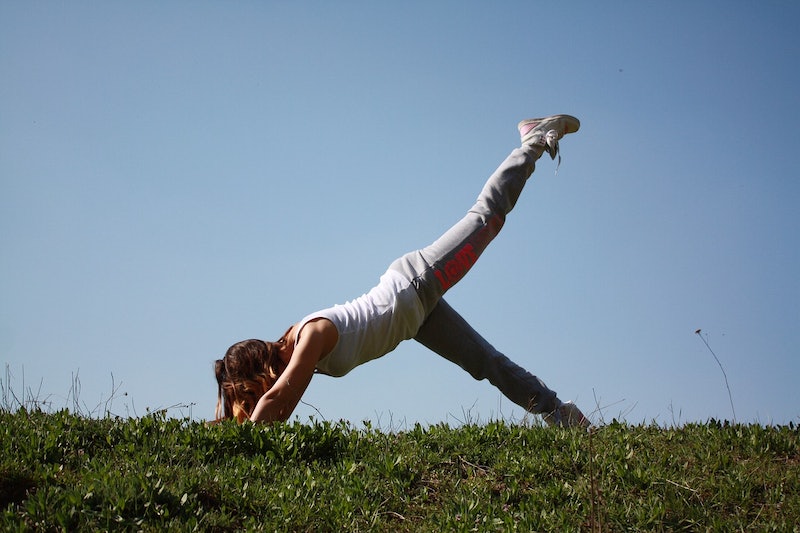 Alas, the start of 2016 and all I can think about yet again is how I’m determined to get healthier and stronger. I’ve failed before (many times!), but this year I decided to look into some weird things every fit person does for some inspiration on what I should emulate in order to succeed. Turns out, fit people really do have a very different mindset about working out, amongst other things, than I do. For one, working out to me has always seemed like a chore. It’s something that I’m totally fine skipping if literally anything else comes up to do instead. Who am I kidding — I’d skip working out to clean up garbage on the side of the road if that was posed to me as an option. Meanwhile, as I’ll explain in this article, fit people feel movement is mandatory in their lives. They don’t even have to think twice about it.

As someone who goes through stages of being fit and then unfit, I’m constantly striving for consistency in the way I think about nutrition and exercise. This is something I completely envy about fit people. They have the right way of looking at things, and they take action. They aren’t just sitting home on their butts watching Keeping Up With The Kardashians and wishing themselves to be as fit as Khloe 2.0 — they’re out there putting in the work for it. Here are eight things every fit person does.

1. They Don’t Let Themselves Get Bored

Chances are you’ve definitely heard the notion that if you’re bored with your current workout regime, you should mix it up by trying something new, like a group spin class or outdoor hiking. It totally makes sense. Here’s the slightly different thing about fit people, though… they don’t let themselves reach the point of boredom, according to Huffington Post. In the article, Denise Mast, president of New York Adventure Racing Association, noted fit people love to mix up what they’re doing. She said, “Before you find you're getting bored, find something else that interests you.” Makes sense, right? In order to prevent workout boredom we should constantly be on the lookout for other exercises that might be right up our alley.

2. They Never Skip The Weights

I know I’m not the only person out there that dreads lifting weights. My major problem with it is that I hate heading into the weight room at my gym and being surrounded by people who seem like professional. I dread having them even glance my way (we’ll talk more about caring about what other people think later). Here lies another huge difference between me and those who are fit — they understand that lifting weights is as important a piece of a workout routine as cardio.

According to Women’s Health, a study out of Penn State showed participants who lifted weights as part of their workouts lost six pounds more of fat than those who didn’t. Women’s Health also noted lifting weights not only increases the number of calories you burn during a workout, but after the workout is done as well. Total win-win!

3. They’re OK With Throwing Food Away

Before you (and my Italian grandma!) start to hate me, give me a second to explain. We’re taught from a very young age that we shouldn’t waste food. The difference between how an average person orders at a restaurant and how a fit person would order not only comes down to what they’re ordering, but how they’re ordering as well, according to Health Magazine.

Fit people know how to order the right portions and when to share a dish rather than order their own. If they can’t finish what’s in front of them, they either take it home or let the restaurant dispose of it. They’re kind enough to their body to not let the pressure or clearing one’s plate overcome them. In fact, according to Food Rules: An Eater’s Manual, a book by author Michael Pollan, one of the rules he advocates for healthy eating is, “Leave something on your plate.”

4. They Believe Movement Is Mandatory

There isn’t a question whether they’ll be active today or not. According to MindBodyGreen.com, fit people are aware that movement is essential for vibrancy and strength. The article noted the average person might consider exercise as a “take it or leave it,” in which case when push comes to shove, they might leave it. Fit people are aware that the short-term pain of a difficult workout will yield great long-term results, according to MindBodyGreen.com. They understand that despite how busy they are, movement is necessary.

Fit people understand that it’s OK to splurge on food or drinks here and there. According to Dr. Brandy Segura who wrote an article on staying healthy while having more indulgent meals for BodyBuilding.com, cheat meals can actually improve your body. How? According to Dr. Segura, “They can reset hormones responsible for metabolism and insulin regulation, replenish glycogen for increased energy, and keep calorie-burning and fat-torching mechanisms high.”

Separately, fit and healthy people are also likely to reward themselves for meeting certain fitness goals through non-food means as well, according to Philadelphia Magazine. This could translate to a new purse as a reward for working out five times that week, or a new pair of boots after completing a 10K.

6. They Go Grocery Shopping After A Meal

It’s not a myth that if you go grocery shopping on an empty stomach you’ll end up buying a bunch of non-nutritional things you don’t need (and perhaps might even find yourself eating out of the box right there in the aisles). According to Mayo Clinic, there is definitely validity to it. A study discussed in the New York Times also confirms this notion. With that in mind, every fit person knows it’s best to head to the grocery store with food already in their belly.

7. They’re Not Afraid Of A Little Fat

On their plates, that is! When the average person thinks of fats, they instinctively associate it with being bad. However, a fit person knows certain fats are essential to the diet, according to WebMD. A separate WebMD article noted “essential fatty acids (EFAs) keep our skin soft, deliver fat-soluble vitamins, and are a great source of energizing fuel.” For the fit people out there you’re likely more than aware, but the fats we should be avoiding, according to WebMD, are saturated and trans fatty acids, which can increase cholesterol, clog arteries, and increase the risk of heart disease.

8. They Don’t Pay Attention To What Other People Think

Aside from my fear of the weight room, I’ve definitely skipped a class at the gym before because I was sure I was going to look stupid doing it. Spin with uber-athletes? No way, Jose! Here’s yet another interesting thing about fit people — they don’t care what anyone around them thinks. They’re focused on themselves and having the best workout possible without comparing themselves to others, according to the Huffington Post. If they were spending time watching what I was doing, would they have time to get into as great of shape as they’re in? Likely the answer is, “Hell no!.”

I, for one, know these habits of fit people are already inspiring me to change my mindset and actions each day in order to live the healthiest life possible. By channeling some of these things, we can all find ourselves ending this year with our fittest bodies yet.