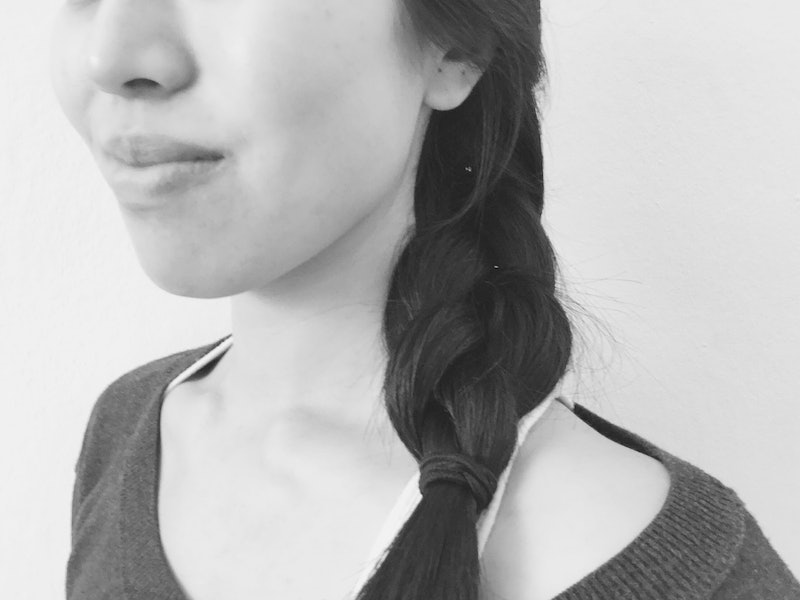 I love braids — they’re elegant, they disguise dirty hair, and when done well, they keep your hair put for hours. I like them so much, I put my hair in the same French braid almost every day. But the same style day after day gets kind of boring, which is why I decided to try fancy braid tutorials from the Internet. It's always a good idea to switch things up, especially now that's it the new year, right?

The only problem: online braid tutorials (as well as many other beauty tutorials) are insanely difficult to follow. My French braid is simple in comparison — I start near my part-line, braid around the back of my head, and finish it off with a little side-braid. These online braid tutorials on the other hand are no easy feat, not because the hairstylists are unclear or hard to understand, but because my hair just won’t always do what their hair does.

This week, I decided it was time to try something new. I scoured YouTube for some of the easier-seeming tutorials and got to work. To be fair, I’m no braiding expert. For example, before this experiment, I’d never even tried to do a Dutch braid (aka inside-out French braid) before. So the photos from my attempts are a little messy, to say the least.

Below are the six styles I thought would be reasonably easy. Some were, while others definitely weren’t. Check out which ones I attempted and consider whether you want to try them out, too.

I decided to start with this five-strand braid, because it looked the simplest. It was pretty much just a normal side braid (not even a French braid!) but with five strands instead of three. As it turned out I had too much hair, and too few hands to make this work. It also probably would have helped if my hair was a foot or two longer. The photo below shows about how far I got before I accidentally dropped most the hair. As you can see, it was kind of a mess.

Even though this one looks a bit harder, it really wasn't. I got the Dutch braid going pretty well in the beginning, in fact. But things got a bit confusing when I finished braiding down the side of my head. I had to switch my hands to the other side of my head, so I could wrap the braid around the back, and then finish it off over my other shoulder. Because I'm not too familiar with Dutch braiding, I completely forgot which strand needed to go where, and the end result was a bit messy.

This was looked a bit more complicated than what I was going for. But I couldn't resist the "Elsa Hair" description. At first, I thought it was going really well. This was my second time Dutch braiding, so I was much better/quicker at it already.

Then I realized that I was doing a normal Dutch braid, rather than a Dutch "fishtail." For the record, I've never fishtailed (think: intricately woven my hair with four strands, instead of three like a normal braid) before. I decided to start over and give that a shot. It didn't work as well. I didn't even make it down the side of my head.

This one, I thought, would for sure be easy. Waterfall braiding is really just French braiding, but you drop strands of hair and incorporate new hair as you go. In fact, I've done it before, on my friends during high school sleepovers, so I knew I could. But it turns out that doing a waterfall braid on yourself is much harder than doing it on a friend. I couldn't keep track of the hairs, and ended up dropping the whole thing. Here's a picture of me half-way through.

This one also looked easy enough — just two Dutch braids wrapped around the back of the head. No problem. And in fact, I think this was my best attempt at a fancy braid. Because the two braids use very little hair, compared to the others I tried, it was much easier to manage. The end result was a little messy, but it worked well enough that I think I could have good results with a few more tries.

For my last one, I wanted to try something a bit more challenging. This halo braid probably isn't something I would wear out and about, but it definitely looks cool. Unfortunately, my execution just looked messy. I had some trouble wrapping the braid around the back of my head again. Once I made it to the back, I abandoned any attempt to Dutch braid. I finished with a normal braid, and held the end piece up against my head. In the end, I could see how this style might work. But it didn't this time.

Looking back, my everyday French braid probably took 20 or 30 tries to get right too. I think fancy braids aren't something that most people can get right on the first try. The women in YouTube tutorials probably spend a lot more time practicing with their hair than I do, so my spectacular failures above aren't too embarrassing.

I do think I'll keep trying the Front Row Braid and the Side Dutch Braid, though. Those were the two that I almost had, and I think with a few more tries, they might be less messy, and could even look pretty nice. Cheer's to a 2016 filled with new braid hairstyles aplenty!