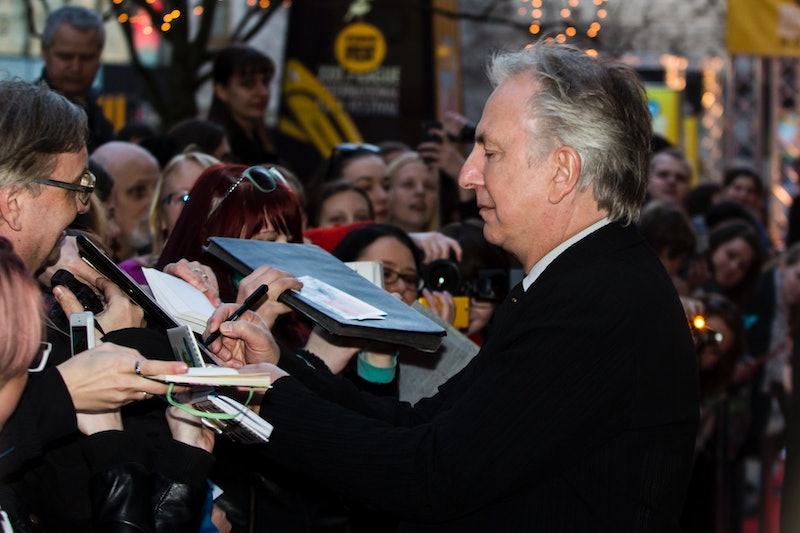 On Thursday, the world got the horrifying and depressing news that Alan Rickman has passed away. The iconic actor, best known among the millennial generation for playing Severus Snape in all eight Harry Potter movies, was struggling with cancer, and was 69 years old at the time of his death. It didn't take long for the news to spread like wildfire, and for people to begin desperately tweeting out their grief, finding other like-minded people also suffering from the loss of such a truly phenomenal talent. Fans are reacting to Alan Rickman's death in a variety of ways, from refusing to accept it at all, to mourning the loss of two great British icons in the same week, to celebrating the actor's long life and long career. There's no one way to react to such devastating news, but one thing is for sure: the world will never be the same.

Rickman was a transformative actor. He was able to embody a character with such perfect gravitas that it was occasionally hard to separate the man from the character that he was portraying. He had an incredibly recognizable voice, and his ability to enunciate was the stuff of meme legend. He had such a powerful effect on so many people that it's almost impossible to believe that the world could dare to continue to turn without him. But how do fans feel? Check out the tweets below.

Some just have no words for this news, because they haven't quite processed it yet.

The fan bases of David Bowie and Alan Rickman are intersecting, as people draw connections between the loss of two icons from the same disease in the same week.

I still can't believe that January 2016 could be starting off with this much tragedy, but some fans have already reached the acceptance stage and are moving right on to celebrating the life of Rickman. Eventually, hopefully, we'll all be able to do that through our grief.