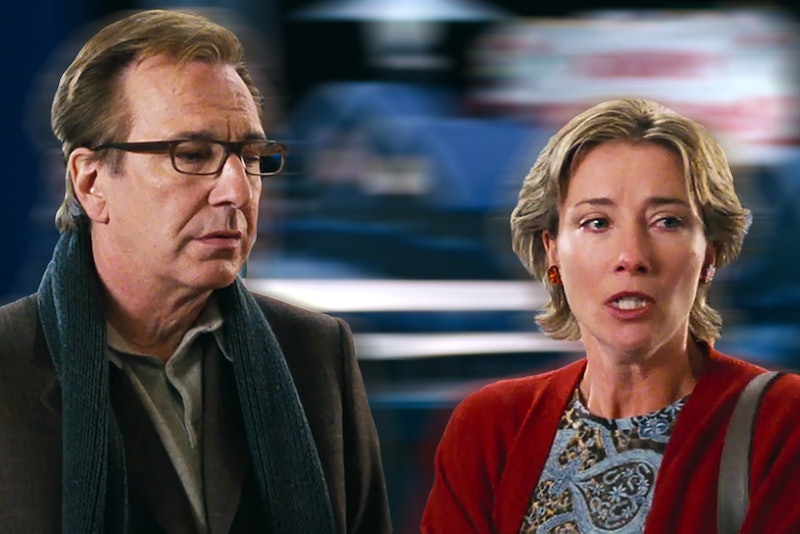 Longtime friend and frequent co-star of Alan Rickman, Emma Thompson has spoken out on his death. The pair performed together in many a movie from Love Actually to Harry Potter to Sense and Sensibility. Just as the world was rocked by the announcement of Rickman's passing, Thompson, too, is having a hard time coming to grips with the news. She spoke out via New York Times culture reporter David Itzkoff who posted Thompson's tribute message to Rickman to Itzkoff's own Twitter.

Thompson herself doesn't have any social media pages, but that didn't stop her from speaking eloquently, and immediately, about Rickman's passing. "Alan was my friend and so this is hard to write because I have just kissed him goodbye," her statement about the actor began. Thompson then detailed what she always admired abut Rickman, from his humor and wisdom to his unbelievable talent. "I couldn't wait to see what he would do with his face next," Thompson continued. She also acknowledged his time spent behind the camera as a director and how privileged she felt to work with him. But, above all, Thompson paid tribute to Rickman as a friend.

Alan was my friend and so this is hard to write because I have just kissed him goodbye. What I remember most in this moment of painful leave-taking is his humor, intelligence, wisdom and kindness. His capacity to fell you with a look or lift you with a word. The intransigence which made him the great artist he was—his ineffable and cynical wit, the clarity with which he saw most things, including me, and the fact that he never spared me the view. I learned a lot from him. He was the finest of actors and directors. I couldn’t wait to see what he was going to do with his face next. I consider myself hugely privileged to have worked with him so many times and to have been directed by him. He was the ultimate ally. In life, art and politics. I trusted him absolutely. He was, above all things, a rare and unique human being and we shall not see his like again.

It's so sad that the world lost such a great man and actor, but at least through tributes like these from his friends and colleagues, Rickman's memory lives on. And, thanks to Thompson's kind words, he'll always be remembered for the "rare and unique human being" that he was.