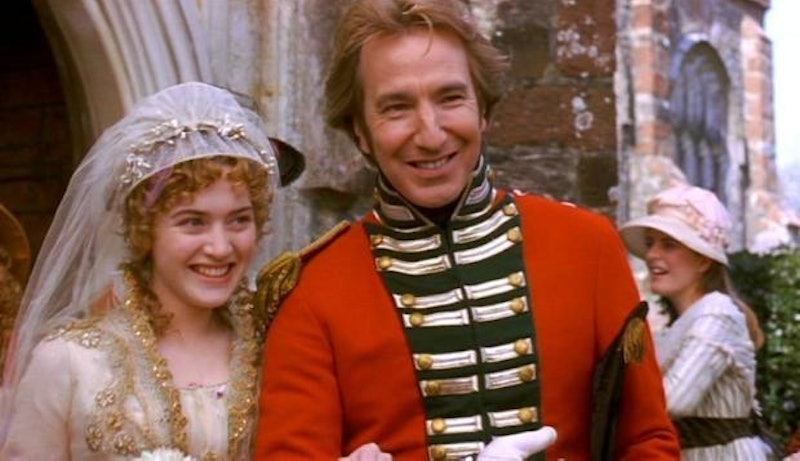 On Thursday morning, the world was hit with another heartbreaking celebrity death. Alan Rickman died at the age of 69 after a battle with cancer. The actor is being mourned all over the news and on social media, with fans embarking on marathons of his signature performances. There's a Rickman role for any mood. Want to get lost in an '80s action flick and the actor at his most villainous? Go for Die Hard. If you prefer your Rickman droll and sarcastic, Dogma may be in order. And of course, there are eight Harry Potter movies to cue up if you need a little magic (and a lotta wig) right now. But there's one rare and important version of Alan Rickman that should not be forgotten: the actor as a romantic hero. He stole a lot of hearts in the 1995 adaptation of Jane Austen's Sense & Sensibility. Colonel Brandon isn't your standard Alan Rickman role, but it is definitely his dreamiest.

This incarnation of Sense & Sensibility came around when the British author was enjoying another posthumous boom in entertainment. Clueless had updated Emma for the Valley Girl set. Colin Firth was sauntering around in a wet shirt as a romance novel cover Mr. Darcy over at the BBC. Sense & Sensibility went the traditional route; screenwriter/star Emma Thompson and director Ang Lee created a movie for the Austen purist.

Sense & Sensibility might be the least romantic novel in Jane Austen's canon, and I don't mean that in a negative sense. Rickman plays Colonel Brandon, a steadfast, stand-up guy who has no idea how to sweep a girl off her feet. But that's where the fun starts. He has feelings for Marianne, the middle Dashwood sister, as soon as he meets her. But he's too reserved for her, and she's too caught up in romantic fantasy to consider what he can offer. Have I mentioned that this film features Kate Winslet and Alan Rickman as a flawless and charming pair?

Marianne eventually realizes that Brandon is more of a romantic than she assumed, simply because he's willing to stick around and be there for her when his flashier rival splits. It doesn't hurt that he looks great in a waistcoat either, or that his manners are impeccable. Rickman isn't an obvious choice to play a Jane Austen hero, which is why I love watching him in this role. Colonel Brandon is an Austen hero who isn't aware he's an Austen hero. He's just a grown-ass man who knows what devotion really looks like.

While others may embark on Harry Potter marathons or rewatch Die Hard, I'll be celebrating the life and work of Alan Rickman with a viewing of Sense & Sensibility, the movie that proved Hollywood's favorite bad guy could also be one hell of a leading man.

More like this
At 14, Jenny Han Wrote Rom-Coms About Her Friends & Fan Mail To Leo DiCaprio
By Alyssa Lapid
Everything You Need To Know About The 'Knives Out' Sequel
By Grace Wehniainen
Howard Stern's Net Worth: Is He The Richest Man In Radio?
By Hugh McIntyre
The 'Hocus Pocus' Sequel Finally Has A Release Date & It Makes Total Sense
By Shannon Barbour and Radhika Menon
Get Even More From Bustle — Sign Up For The Newsletter