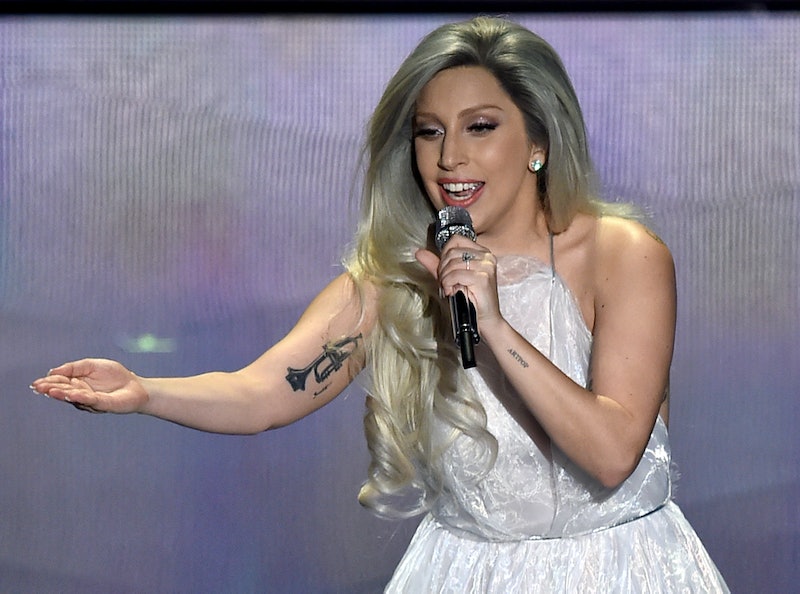 It's that time of year again: The 2016 Oscar nominations are finally here. While movie buffs will undoubtedly spend the next several weeks analyzing the tight race for Best Picture, music fans (like me) will likely focus most of their attention on the exciting race for Best Original Song. The 2016 Best Original Song nominees are "Earned It" by The Weeknd from Fifty Shades of Grey, "Manta Ray" by J. Ralph and Antony Hegarty from Racing Extinction, "Simple Song #3" by David Lang from Youth, "Writing's on the Wall" by Sam Smith from Spectre, and "Til It Happens to You" by Lady Gaga from The Hunting Ground. That's right, folks: Lady Gaga could win an Oscar in 2016. Whoa. What a time to be alive! She just won a Golden Globe — will her hot streak continue?

After her Globes victory last weekend, many people mistakenly thought Gaga was one step closer to joining the entertainment industry's elite circle of EGOT winners — aka people who have won an Emmy, a Grammy, an Oscar, and a Tony during their careers. Unfortunately, this wasn't the case (the Globes don't count for EGOT), but Gaga has won six Grammys (and could take home a seventh this year), so she's already earned her "G." And if "Til It Happens to You" triumphs at the 2016 Oscars, she'll have her "O," too! She's becoming quite the critical darling.

So, realistically, what are Gaga's 2016 Oscar chances? Check out my break down of the Best Original Song nominees below to find out.

"Earned It" By The Weeknd From Fifty Shades Of Grey

The Weeknd's slow-burning R&B anthem is certainly the biggest commercial success of the bunch, but I'm not sure that will hold much sway with Oscar voters. Also, it may have a hard time being taken seriously because of its affiliation with Fifty Shades of Grey (which was just nominated for six Razzie Awards... ouch).

Racing Extinction is a 2015 documentary about mass extinction and the illegal wildlife trade, so, in terms of the relevance and significance of its subject matter, it definitely trumps Fifty Shades of Grey! However, "Manta Ray" — a piano-led ballad that may or may not be sung from the perspective of an actual manta ray... ? — isn't terribly compelling or moving, in my opinion. It's a pretty song, sure, but I don't envision it walking away with the statue.

"Simple Song #3" appears on the soundtrack to Youth, a 2015 Italian film about the friendship between a classical music composer and a filmmaker. It's a beautiful (and dramatic) piece that I think voters will like. Lyrically, it's not particularly memorable, but I still think it's a top contender.

"Writing's On The Wall" By Sam Smith From Spectre

"Writing's on the Wall" is one of the worst James Bond songs of all time. It's boring; it's limp! It's ineffective. For me, it's a total miss. However, it did just recently win Best Original Song at the Golden Globes, so I can't count it out. Apparently, there are people out there who really like the track! Who knew?

If you ask me, "Til It Happens to You" has everything going for it: it's featured in an incredibly important documentary about sexual assault on college campuses, it was co-written by seven-time Best Original Song nominee Diane Warren (she's long overdue for a win!), and it's deeply affecting. Not only do I think it has the most universal appeal, I think it will inspire the most passionate support, as well. Gaga has a great shot!

So, will Gaga move one step closer to EGOT? We'll have to wait until the 2016 Oscars ceremony takes place on Sun., Feb. 28 to find out.