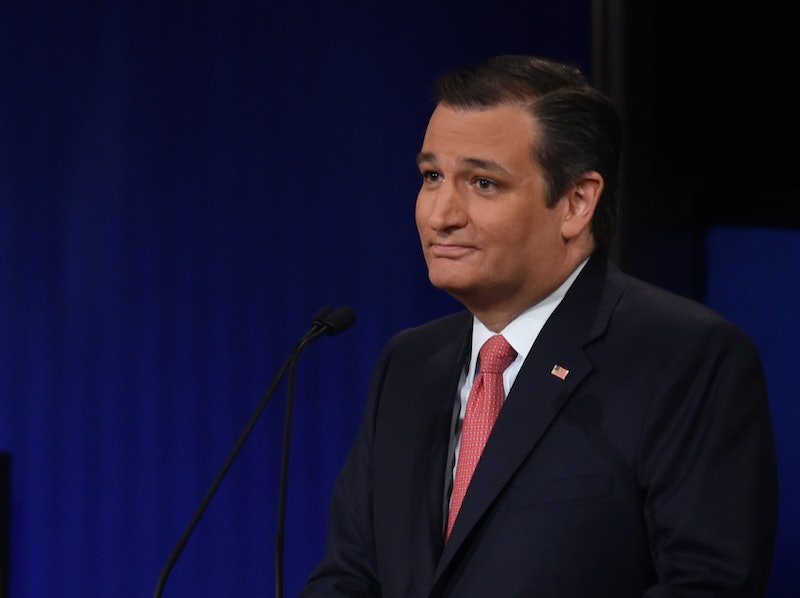 On Thursday night, the Republican candidates descended on North Charleston, South Carolina, for the sixth debate on the GOP primary schedule, and a certain senator from Texas had a pretty strong night. If that sounds like a lot more time than we've gotten with the Democratic candidates, you're right about that ― the sixth debate is just the halfway-mark for the Republicans, while six debates accounts for the entirety of the Democratic schedule. But if one Republican might wish there were even more debates, it'd be Cruz. Here's Ted Cruz's closing statement from the sixth GOP debate.

Make no mistake ― he’s fought his way directly into the thick of the race for the Republican nomination, bolstered by an extremely bizarre set of circumstances. Virtually no one predicted the influence of Donald Trump, after all (except Trump himself, obviously), nor could anyone have known just how packed the Republican field would remain this deep into the race.

Basically, in a showdown between 11 candidates heading into the Iowa caucuses (12 if you count Jim Gilmore, who hasn't appeared in a major debate), it's key to peak at the right time and establish yourself as a credible choice. And with a rise in the polls placing him squarely behind Trump ― Iowa is a very tight state right now, with Cruz narrowly trailing by a few points ― he clearly wanted to close with a flourish that would carry some momentum, and he did so with an aggressive appeal to American service members, invoking the Benghazi attacks (and shouting out Michael Bay's upcoming movie on the subject).

Thirteen hours. Tomorrow morning, a new movie will debut, about the incredible bravery of the men fighting for their lives in Benghazi, and the politicians that abandoned them. I want to speak to all our fighting men and women. I want to speak to all the moms and dads whose sons and daughters are fighting for this country, and the incredible sense of betrayal when you have a commander-in-chief who will not even speak the name of our enemy, radical Islamic terrorism. When you have a commander-in-chief who sends $1 billion dollars to the Ayatollah Khamenei, who’s responsible for murdering hundreds of our servicemen and women. I want to speak to all of those maddened by political correctness, where Hillary Clinton apologizes for saying “all lives matter.” This will end. It will end on January 2017, and if I am elected president, to every soldier, and sailor, and airmen, and marine, and police officer, and firefighter, and first responder who risks their lives to keep us safe: I will have your back.

Throughout the campaign, Cruz's angle has been pretty clear ― he's trying to win the nomination by appealing to the religious and culturally conservative slice of the Republican electorate. Months ago, countless political observers were predicting an establishment-heavy, downright dynastic general election match-up in Jeb Bush versus Hillary Clinton. But with Bush's campaign largely having flamed out in catastrophic fashion (he's now polling at just under 5 percent nationally), and Florida Sen. Marco Rubio assuming his role as the prototypical establishment pick, candidates like Cruz who might've been overlooked initially are getting some time in the sun.

In Cruz's own case, his rise came almost directly at the expense of the Carson campaign ― just months ago, Dr. Ben Carson was running narrowly behind Trump, before eventually fading into single-digits. It'll be vital for him to try to extend some of his positive, forward momentum over the next several weeks, however, because if Carson's story speaks to anything (just like erstwhile Republican contenders Herman Cain, Newt Gingrich, and Rick Santorum in 2012), nothing hurts as bad as peaking too soon.