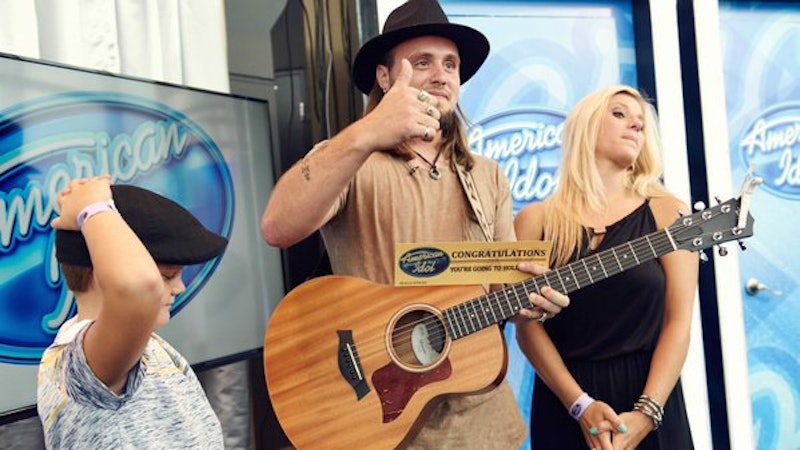 Could a country singer take it all on the Farewell Season of American Idol ? If Elvie Shane has his way, then the answer might just be yes. 27-year-old Shane wowed the judges with a powerful rendition of "The House of the Rising Sun" and quickly earned a golden ticket right on through to Hollywood. Though his audition was seemingly effortless, the road there was not.

As a young teenager, Shane got into drugs. He battled addiction for quite a few years, even getting arrested for drug use. But when he met his now-wife, Mandy, he decided to quit the drugs for good and to start a life with her and her then-five-year-old son. Because of that decision, Shane was able to pursue his love for music — and I'm so glad he did. Not only did Shane give a good performance, he made it clear that he possesses true talent. His perfect pitch and deep vocals inspired chills — or "goosies" as Jennifer Lopez calls them. Shane gave one of the best performances of the night, and it's all because he was able to turn his life around.

Shane earned himself a ticket to Hollywood, but will he realistically make it beyond there? Absolutely. Unlike many of the contestants who advance to Hollywood, the Kentucky native possesses real talent and maturity. His voice will easily rise above the noise of the other contestants and get him noticed by the judges. Plus, he's one of the few country singers at this point in the game. This puts him in a different category from the myriad of pop and rock singers, giving him a major edge. As long as Shane performs the way he did tonight, there's no doubt he'll make it past Hollywood — and even further.

More like this
18 Years After 'American' Idol, Jennifer Hudson & Simon Cowell Reunited On Her Talk Show
By Radhika Menon
20 Years Later, Kelly Clarkson & 'American Idol' Judges Reunite For Her Hollywood Walk Of Fame Star
By Radhika Menon
Jason Derulo Is Launching A New Singing Show In The UK
By Maxine Harrison
How To Stream 'Pretty Wild'
By Arya Roshanian
Get Even More From Bustle — Sign Up For The Newsletter