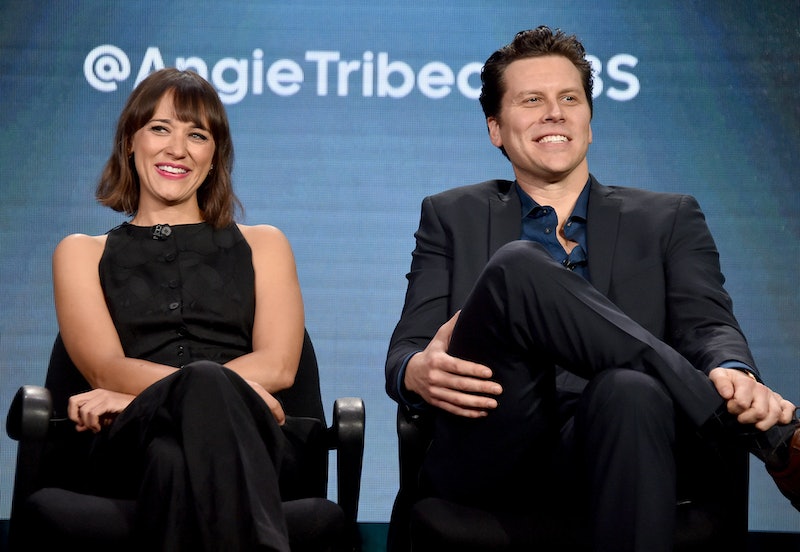 Ah, the police procedural. It's television's most enduring drama. It seems like every movie-to-TV adaptation last year was really an excuse to make a new procedural with an already-established premise. Limitless? Get someone on NZT-48 to help the FBI. Minority Report? Get a precog to help a detective. Snooze. Thankfully, someone is finally going to inject some silliness into the dour genre. Angie Tribeca , which premieres on TBS on Jan. 17, puts a satirical spin on all of these super-serious dramas. Rashida Jones stars as the titular detective, who works cases with an LAPD squad that includes her partner, Jay Geils, played by Hayes MacArthur. And while we all know and love Jones and are super happy to see her on TV again (hooray!), who is her co-star?

You've probably seen him around, he's one of those "that guy" actors. And he may be lucky that you'll be seeing him around again. "I hear that in the pilot, Jay is involved in a potentially deadly accident," Nellie Andreeva wrote in a Deadline article. "Needless to say, he is expected to survive (or that part of the pilot will be reshot)." While it's a good thing he'll be parked at Angie Tribeca for a while, here's where you may have seen MacArthur before, and what you need to know about him.

He Started In Comedy

For an actor who landed a role on Angie Tribeca, that's not all that surprising. According to his bio, the Chicago native won the 2003 Rebels of Comedy Competition, so you know he has chops.

But You Probably Know Him From TV

MacArthur has had a ton of roles all over television. He's been on Go On, Whitney, How I Met Your Mother, and even an episode of Curb Your Enthusiasm. But, before Angie Tribeca, his most regular role was on NBC's Perfect Couples, where he was one of the six main stars. Here's hoping for MacArthur's sake (and ours!) that Angie Tribeca lasts longer.

And, as you can guess, he's done more comedy. He's had roles in movies like The Babymakers, She's Out of My League, and The Game Plan. One of those film credits, National Lampoon's Homo Erectus, is probably especially important to MacArthur, because he starred in it with his future wife. Who could that be?

MacArthur and Larter have been married since 2009. "They were engaged in December 2007," People reports, "and later that year Larter, 33, spoke about her husband-to-be saying MacArthur, 32, 'brought light to my life. I feel lucky every morning when I wake up and see him.'" Awwww.

And They Have 2 Kids

Theodore and Vivian. Double awww. Hopefully, they'll be asleep early on Sunday night and won't have to see their dad get possibly fatally injured in the Angie Tribeca premiere.