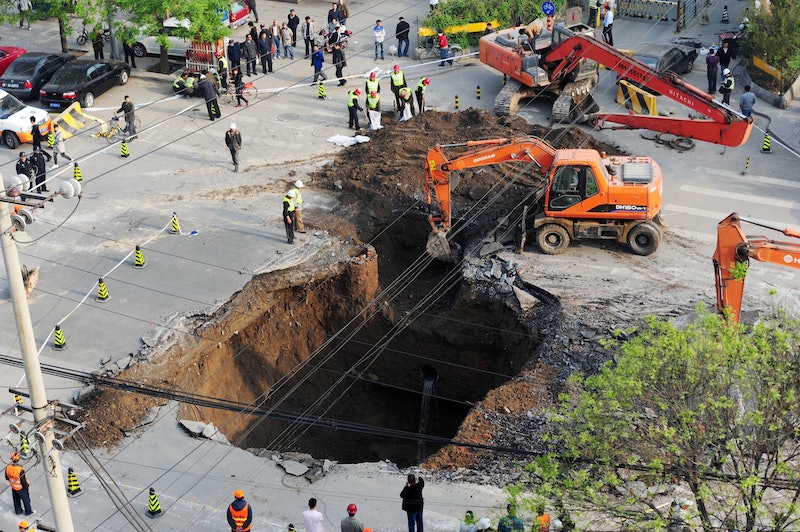 Do you live in an area susceptible to sinkholes? Would you even know if you did? The most terrifying sinkholes in history have done some serious damage, but science shows that the next one could be closer (at least geographically speaking) than you might think.

Aside from the physical damage they cause, sinkholes create scary visuals. Roadways, houses, cars, and people can be just totally consumed when the earth gives way. Sinkholes occur when water seeps underground and dissolves soluble rock and sediment underneath the surface of the ground. According to the U.S. Geological Survey, 20 percent of the United States is made up of this soluble rock and sediment, meaning that there are regions throughout the U.S. particularly susceptible to damaging sinkholes, including parts of Florida, Texas, Alabama, Missouri, Kentucky, Tennessee, and Pennsylvania. Sure enough, these threatened areas do, in fact, align with where some of the most damaging sinkholes have ever happened.

The good news is that sinkholes often come with clear warning signs, giving people time to prepare before the sinkhole reaches a catastrophic level of collapse. For instance, slumping or sagging fences and trees are a good indicator that a sinkhole is forming underneath the ground. Warning or not, though, sinkholes deserve to be taken seriously.

As USA Today reported in 2013, thousands of sinkholes develop each year in Florida thanks to its limestone foundation, yet very few of them are fatal. In February of 2013, however, a sinkhole tragically swallowed 37-year-old Jeff Bush while he was sleeping in his home near Tampa. Bush's brother, Jeremy, and four others were in the home at the time of the incident, and all of them were able to escape. Experts, including Anthony Radazzo, who has lectured on sinkholes at Oxford University, noted at the time how rare of an episode Bush's death was. "Usually, you have some time," Radazzo told USA Today. "This is very unusual and very tragic."

A massive sinkhole in the Perm region of Russia, west of Siberia, has grown to at least 400 feet wide and 250 feet deep, making it one of the largest — if not the largest — sinkholes ever recorded. The sinkhole is thought to be caused by a nearby mine, which uses seawater. The sinkhole has reportedly swallowed 20 buildings and caused 12,000 locals to evacuate. At least one person has died from falling into the sinkhole.

This one might haunt you: Last year, scientists confirmed that a skeleton found in Altamura, Italy, was that of a Neanderthal man who had fallen into a sinkhole and fused to its walls thousands of years ago. The fossilized bones were discovered in 1993, but it was unclear how old the skeleton actually was. Now, it's believed that the man fell into a sinkhole somewhere between 130,000 and 172,000 years ago. He likely starved to death in the sinkhole. Over time, his bones became absorbed by the walls of the sinkhole itself.

In what sounds more like the plot to the next post-apocalyptic Netflix series than real life, the city of Picher, Oklahoma, made the decision to cease municipal operations and effectively shut down in 2009. Years of mining, beginning in the 1920s, left the town little more than a toxic wasteland. Thanks to the prevalence of limestone dug up my the mining operations, the entire town is susceptible to sinkholes, which have swallowed up buildings over the years. The city's public park even had to be fenced off for fear that a sinkhole would swallow children and families. Today, Picher is basically a ghost town.

Guatemala, particularly the capital of Guatemala City, is susceptible to sinkholes thanks to severe rainstorms, a nearby volcano eruption, and faulty sewage pipes. In 2010, a sinkhole 65 feet wide and 300 feet deep opened, consuming a three-story building and surrounding infrastructure. All in all, at least 15 people were killed. The incident shared significant similarities with a 2007 sinkhole in Guatemala City, which killed five people.

Ultimately, sinkholes themselves aren't rare, but death and catastrophic destruction as a result of them is. A key takeaway might be that some sinkholes are caused by natural factors, like the sediment beneath the surface we live on, while others are undoubtedly exacerbated by human activities, like mining. Either way, it's important to recognize the signs and maintain infrastructure appropriately.

More like this
Why Experts Say Sleeping With A Fan On Isn’t Totally Risk-Free
By Sophie McEvoy
The 6 Best UV Umbrellas, According To A Dermatologist
By Rachael Green
The 8 Best Indoor Door Mats For Your Home
By Jenny White
7 Things We Learned From Rebekah Vardy's First Post-WAGatha Christie Interview
By Sam Ramsden
Get Even More From Bustle — Sign Up For The Newsletter