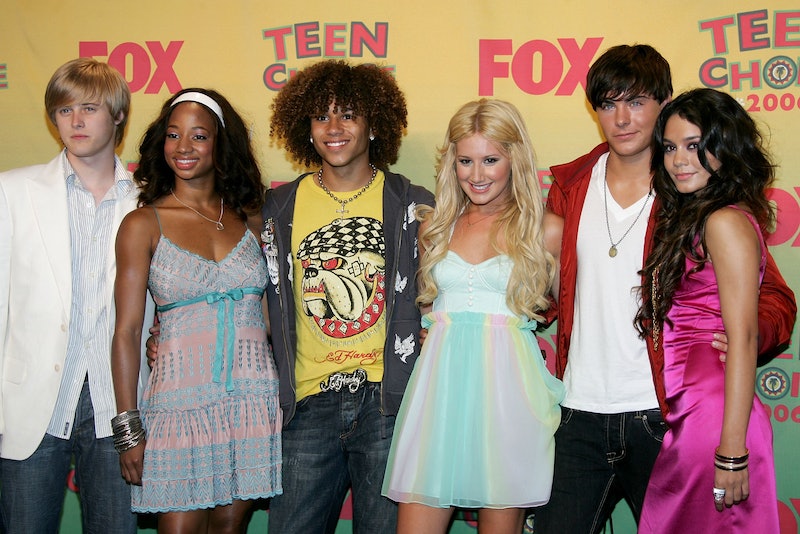 Your prayers have been answered, millennials: there is going to be a High School Musical reunion, just in time to coincide with your quarter life crisis. According to TV Line, nearly all the members of the original cast — Vanessa Hudgens, Ashley Tisdale, Lucas Grabeel, Corbin Bleu, and Monique Coleman — will be returning for a Jan. 20 special Disney Channel screening of the first film. Unfortunately, Troy Belton himself, Zac Efron, won't be there, but he will pre-record a message that will play during the events. Hey, you can't have everything.

No matter how excited you are for this upcoming reunion, though, you aren't more excited than Sharpay Evans herself. On Sunday, Ashley Tisdale tweeted about the news, saying, "Oh the feels....... Get ready because we're back celebrating 10th anniversary #wildcats #hsm." And then, like the messenger angel that she is, she tweeted a picture of herself with Bleu, Coleman, Grabeel, and Hudgens with the caption, "#WILDCATS rawr."

To make matters even better, Grabeel tweeted a picture of the high school gym where only the most magical of collective choreographed dances went down, writing, "What a crazy morning! Hanging after 10 years with @corbinbleu @ashleytisdale @gimmemotalk and @VanessaHudgens."

Coleman then added to the excitement and heart palpitations, tweeting a picture of the fivesome walking hand and hand into the aforementioned gym of dreams. She wrote, "Totally surreal! #HSM10," and I wholeheartedly share in her jubilant disbelief over the whole thing. There is nothing about this that my 15-year-old self (not to mention my current self) isn't squealing over.

Just remember, we're all in this together. Even when you're crying into your glass of chilled pinot grigio over lost youth while enjoying said televised reunion.

More like this
Revisit 1992’s 'A League Of Their Own Cast' Photos After The New TV Series
By Grace Wehniainen
At 28, Lesley Manville Was Acting, Picketing, & Singing Kate Bush Songs
By Olivia-Anne Cleary
Everything To Know About The Musical 'Joker' Sequel – & Lady Gaga’s Role
By El Hunt and Sam Ramsden
Shakira Joked About An Early 2000s Video Of Her First Camera Phone Encounter
By Stephanie Topacio Long
Get Even More From Bustle — Sign Up For The Newsletter