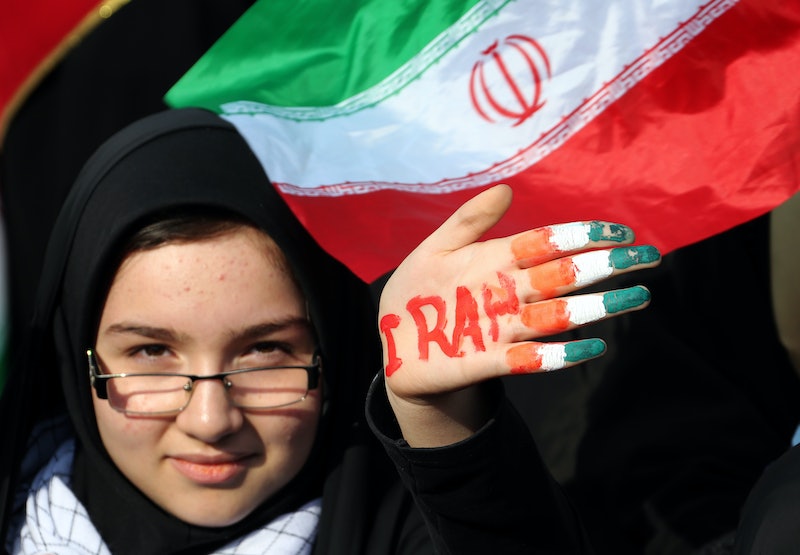 On January 17 President Obama made a statement to the nation regarding the lifting of sanctions on Iran — sanctions that were first put in place in 1979, expanded in 1995, and readdressed again by the UN Security Council in 2006. But after the long-awaited nuclear deal, made last April, many of those sanctions, which have significantly hindered the growth of Iran’s economy, are now being lifted.

Near the end of the president’s speech, he took a moment to again address the Iranian people, saying:

I do want to once again speak directly to the Iranian people. Yours is a great civilization with a vibrant culture that has so much to contribute to the world — in commerce and in science and in arts. For decades, your government's threats and actions to destabilize your region have isolated Iran from much of the world, and now our governments are talking with one another. Following the nuclear deal, you, especially young Iranians, have the opportunity to begin building new ties with the world. We have a rare chance to pursue a new path, a different, better future that delivers progress for both our peoples and the wider world. That's the opportunity before the Iranian people. We need to take advantage of that.

Right on, Mr. Prez. Because sure, restricting the accessibility of things like oil, gas, petrochemicals, and commercial banking might be crucial to ensuring we all live in a secure, nuclear-threat-free world, but at the end of the day, I’m pretty invested in the international comings-and-goings of things like art, music, and books too.

So in that spirit, what better time to add some must-read Iranian authors to your bookshelves? Here are 12 Iranian authors who will take you behind the headlines and show you another side of Iran.

1. The Cypress Tree: A Love Letter to Iran by Kamin Mohammadi

Author Kamin Mohammadi fled the Iranian Revolution when she was only 9 years old, living in the United Kingdom until she returned to Iran in her late 20s. In her memoir, The Cypress Tree, Mohammadi not only describes that journey of returning to her homeland, but digs deep into the roots of her family history, learning how much her family truly has been influenced both by their relationship to Iran, and their distance from it.

Award-winning Iranian novelist Shahriar Mandanipour came to the United States in 2006 as a fellow at Brown University. His first novel to be translated into English, Censoring an Iranian Love Story, follows an Iranian writer as he struggles to write a love story he know will be censored by the Iranian Ministry of Culture and Islamic Guidance; while also following his fictional lovers as they break all kinds of cultural codes in order to be together.

Iranian writer and actor Mahmoud Dowlatabadi earned a reputation in Iran for being an outspoken opponent of censorship, and advocating for the right to artistic freedom. His novel, Missing Slouch, tells the story of an Iranian woman and her children who are forced into poverty after the mysterious disappearance of her husband, and explores the love/hate relationship between the woman and her husband, and how that same love/hate mirrors the relationship between the woman and her country.

Graphic novelist and memoirist Marjane Satrapi grew up in Tehran during the Iranian Revolution and the war with Iraq, in a family which participated in pre-Revolution communist and socialist movements in Iran. Recognized as a New York Times Notable Book, Persepolis tells the story of that upbringing — the conflicts between the private self and the public self in a country rife with social restrictions and censorship — through a series of black-and-white comic strip images.

5. A Teaspoon of Earth and Sea by Dina Nayeri

Born in Iran in the middle of the Iranian Revolution, award-winning author Dina Nayeri immigrated to the United States when she was 10 years old. Her novel, A Teaspoon of Earth and Sea, tells the story of 11-year-old Iranian twins Saba and Mahtab, who are enthralled with American words, magazines, television shows, and music. When Mahtab and the girls’ mother disappear, Saba believes they have moved to the United States without her. As Saba continues to grow up in Iran, she is heartened by her imagination of the different life her twin must be leading in the United States.

Simin Daneshvar is credited with being the first widely-published female Iranian novelist, and is noted as being the first Iranian woman to have her writing translated. Her novel, Savushun, is set in the almost-mystical village of Shiraz, and portrays the life of one family during the World War II Allied-occupation of Iran. Zari, the story’s narrator, gives readers a glimpse into the duality of being a woman in Iran — the competing desires for both traditional family life and an independent identity as well.

7. The Blind Owl by Sadegh Hedayat, translated by D.P. Costello

One of the first Iranian writers to work in experimental prose, Sadegh Hedayat is credited with writing what is considered the first Persian-language modern novel, The Blind Owl. The novel follows one isolated Iranian scholar as he explores the distance — intellectual, social, psychological, and spiritual — between himself and the rest of Iranian society after the devastating loss of his lover.

8. Women Without Men by Shahrnush Parsipur, translated by Kamran Talattof and Jocelyn Sharlet

Writer Shahrnush Parsipur is no stranger to the consequences of being a woman who raises her voice. Arrested and incarcerated for her revolutionary novel, Women Without Men, (banned in Iran) Parsipur wasn’t afraid to write the truth about women’s sexuality in her country. Her novel follows the lives of five women, and depicts the everyday struggles present in trying to complete the simplest tasks as an unaccompanied woman in Iran.

9. Rooftops of Tehran by Mahbod Seraji

This novel takes readers deep into the summer of 1973, and 17-year-old best friends Pasha and Ahmed pass the days lounging on Pasha’s rooftop, sharing stories and examining their lives from the perspective of all-too-typical teenage angst. As Pasha falls into forbidden love and political secrecy, the young lives chronicled in Rooftops of Tehran suddenly become more complicated than any of them could have imagined.

10. Another Birth by Forough Farrokhzad, translated by Hasan Javadi and Susan Sollce

With writing that often focuses on the hidden lives and desires of Iranian women, Forugh Farrokhzad’s work was banned in Iran following the Iranian Revolution. Her collection of poems, Another Birth, was considered quite controversial upon publication for its frank discussions of female sexuality, romance, religion, and Iranian social norms.

Azin Sametipour grew up in Tehran during the Iranian Revolution, before moving to the United States to attend Cambridge College at 18. Her novel, Tehran Moonlight, tells the story of a young rebel violinist determined to give voice to her own identity in a country where women are often kept in the shadows. Of course, there’s a lil’ love story here too.

12. Children of the Jacaranda Tree by Sahar Delijani

Author Sahar Delijani was born in Tehran and grew up in the United States. Her novel, Children of the Jacaranda Tree, tells the story of Neda, a child born to an incarcerated woman in Tehran; Omid, a toddler whose parents are arrested by the Iranian government for their political activism; and Sheida, whose father was secretly executed while incarcerated in an Iranian prison — aka: the "children of the jacaranda tree." Delijani uses each of their respective stories to show how the actions of one generation can have a grave ripple effect on the generations to come.