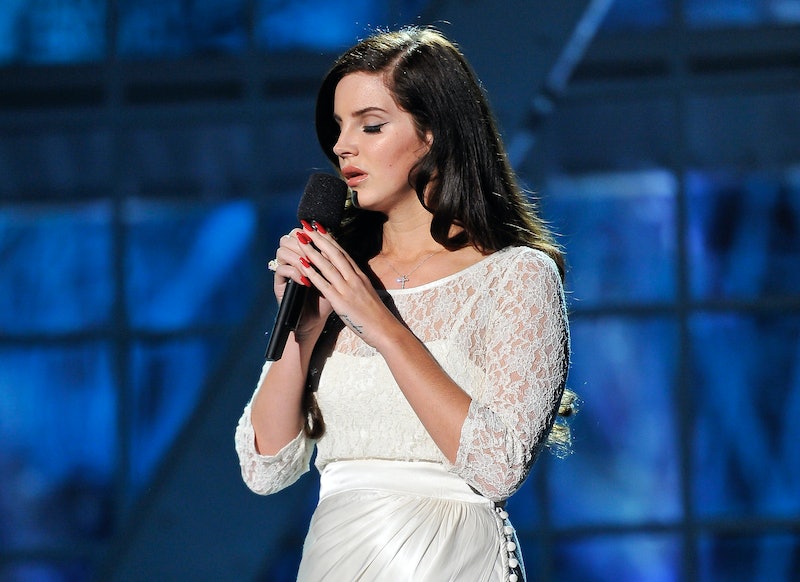 Lana Del Rey is recording a cover of Sleeping Beauty's most iconic song, "Once Upon A Dream," for Walt Disney's upcoming live-action Maleficent and the film just got that much cooler. The track will be released on Sunday, Jan. 26, just in time for Disney to air its latest sneak peek at the film during the 2014 Grammy Awards. Clearly the only choice for a film that's already hit the height of cool by starring Angelina Jolie in the title role and seriously impressive prosthetic cheek bones was to attach epic cool-girl and "Born to Die" singer, Del Rey, to its soundtrack. We're impressed, Disney.

It's no coincidence, we're sure, that Disney tapped Del Rey to cover the tune for the significantly darker retelling of its classic tale through the eyes of its villain. The "Blue Jeans" singer is the diva queen of glamorous gloom and we can imagine that her cover of Sleeping Beauty 's love song is going to be significantly slowed down, haunting, and oozing with that dark glamour she's so good at. And that seems perfect to us, considering Maleficent herself is the most dark and fabulous Disney diva villain — Del Rey would probably be her friend if she lived in a Disney fairytale.

Excited yet? We are — well, we were excited when the first promos for Maleficent hit the Internet — and if you can't see how this pairing is the perfect fit, here's the most recent teaser trailer for the film, out May 30, 2014.