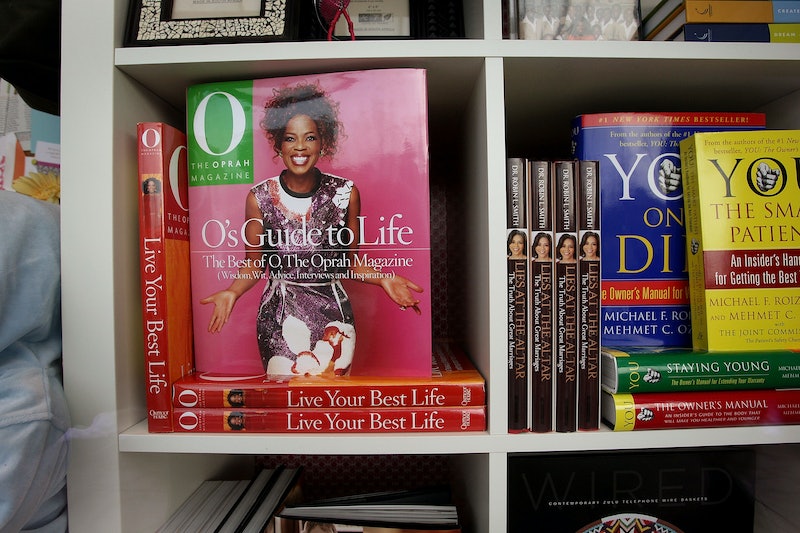 When I moved into my first apartment, I was on a mission. I wanted to decorate my walls, coffee table, and bookshelves with images of the women I idolized — powerful, trailblazing, black women. The first magazine I carefully arranged on my living room side table was Oprah Winfrey’s opus, O the Oprah Magazine . Her gigantic grin greeted me as I quickly fanned her very first issue alongside vintage issues of Honey Magazine, Ebony Magazine, and Essence Magazine.

Still each month I replace those issues with another stack of glossies devoted to singing black women’s songs of triumph, pain, and pleasure — but soon, Winfrey’s face may not greet me as I plop down on the couch and admire my ode to black women in print. The New York Post's Page Six is reporting that Winfrey may soon leave the cover of her Hearst-published magazine. Page Six claims Winfrey is "sick of shooting her O Magazine covers" because they require too much time. Page Six isn't the most reputable source, but if there is truth to the rumor, Winfrey's presence on the cover of her own magazine will be missed.

Though we’ve seen 12 Years A Slave glamour girl Lupita N’yongo on a recent Vanity Fair cover, black women aren’t often reflected on magazine covers. The Huffington Post examined multiple magazine covers to gauge diversity, and found that most glossies are white-washed. From September 2012 to September 2013, 82 percent of magazine covers featured a white celebrity or model, while only 18 percent featured women of color. When magazines — which serve as the arbiters of idealistic beauty — reserve few covers for women of color, it signifies that we don’t matter. Our need for representation is lost as editors continue overlooking us in favor of women who satisfy their bottom line at the newsstand. Winfrey’s monthly presence on a publication that bears her name was an act of defiance and triumph.

Winfrey, an impoverished and abused girl from Mississippi who is now one of the most successful women in the world, put her image on the front of a national publication, and it was an affirmation of her power and beauty. It is aspirational to witness her chocolate beauty month after month. It is as though the talk show queen is heeding the words of John H. Johnson, founder of Ebony Magazine and Jet Magazine — he once said that black media is essential, so he created publications that “give Blacks a new sense of somebodiness, a new sense of self-respect.” Johnson continued, “We believed then — and we believe now — that Blacks needed positive images to fulfill their potentialities.” Winfrey is the epitome of that positivity.

In a world where media abandons and misrepresents black women, Winfrey’s monthly appearance was vital. Print magazines are a declining medium, and women of color are often underrepresented or excluded from publications other than Essence, Ebony, and Sister 2 Sister. We’ve lost staples like Honey, Suede, and Pop'Africana. O’s potential loss of Oprah Winfrey as a cover girl will further this erasure.

Like Assita Camara, founder of a digital movement designed to create sustainable media for black women called Black Girl Revolution , I am tired of singing “requiems for dead Black girl mags.” O was one of a few singular lights in a bleak magazine world. Losing her leave my side table short one magazine, and it will also remove one of a few print images that validate black women.

More like this
The 19 Best Tweets & Memes About Bisexual Awareness Week
By Lexi Inks
Black Women's Equal Pay Day Highlights An Upsetting Problem
By Brandi Neal
This Psychological Effect Might Be Keeping You From Hitting Your Goals
By Lexi Inks
Help! I'm Not Getting Any Attention On Dating Apps. What Can I Do?
By Sophia Benoit
Get Even More From Bustle — Sign Up For The Newsletter