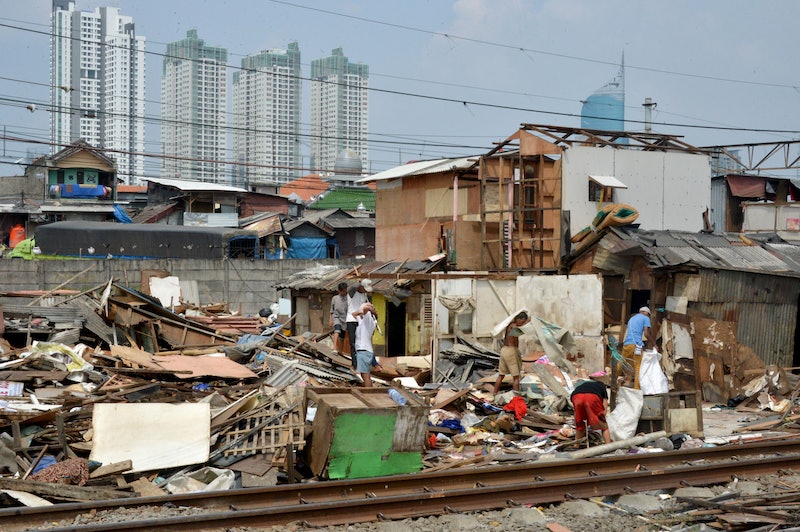 The rich are getting richer. We've heard it from Bernie Sanders, Occupy Wall Street, and now Oxfam. The charity has released a new report on the trend. New data shows that 62 billionaires now own as much wealth as the poorest half of the globe — some 3.6 billion people. And while that's a bit shocking, the real revelation from the report is that the poor are getting poorer. Since 2010 the poorest 50 percent of the globe has gotten about $1 trillion — yes, trillion — poorer.

Oxfam's report analyzed data from Credit Suisse and was released to time with the start of the World Economic Forum in Davos, Switzerland. The forum is a gathering of about 2,500 in the Swiss Alps that is made up of CEOs and world leaders discussing the biggest challenges of our time — while wining, dining, and hobnobbing with the Bill Gates and Leonardo DiCaprios of the world. In other words, the people meeting there this week could do something about the global inequality problem.

So why are the poor getting poorer? The economy has been leaving them out at an increasing speed. As Oxfam puts it, "Far from trickling down, income and wealth are instead being sucked upwards at an alarming rate." Stagnant wage growth, failing public services, outrageous health care costs, and tax havens protecting the fortunes of the wealthy have all helped created this problem. Climate change could make this all even worse.

Oxfam's extended report explored the problems of wage growth with a look at garment workers. The wages paid to the people — many of them women — making clothes for fashion chains in the developed world actually decreased from 2001 to 2011, the report says. Instead of paying the workers a fair share, the corporations make more money and consumers pay lower prices.

The other big problem area the report focused was tax havens. Oxfam said the offshore investments of individual rich people have reached a height of $7.6 trillion, which is bigger than the gross domestic product of the United Kingdom and Germany combined. When taxes aren't paid on these kind of sums, it means governments have to cut education or health budgets. It's not rich from rich countries that are doing this, either.

Oxfam said rich Africans have at least $500 billion saved offshore, costing some $14 billion a year in tax revenue. According to the charity, that's enough money to pay for healthcare that would save four million children and hire enough teachers to put every African child in school.

I suspect you'd agree that none of this should be happening. But will these numbers and examples be enough to bend the ears at Davos? As the poor's wealth decreased $1 trillion these last five years, the world's 62 richest people — many, I imagine, among the conference's attendees — got collectively $542 billion richer. It would seem the system is working for them. Would you say "no" to a raise of that size?

Politicians might be a better audience. Oxfam's list of proposals to make the economy fairer is a great place to start, but it sounds more like something that should be brought up before the State of the Union or the first general election debate. They suggest closing the pay gap between workers and executives, empowering women, reforming tax codes, and spending government money on social spending like healthcare and education.

The rich might not listen, but hopefully voters around the world will.

More like this
Which Cast Member of 'Westworld' Season 4 Has the Highest Net Worth?
By Meg Walters
'The Capture' Is Finally Back – & S2 Looks Tense AF
By Sophie McEvoy and El Hunt
The Lionesses Are Calling For Equal Access To Football In Schools
By Sophie McEvoy
These Cheap Things With Near-Perfect Amazon Reviews Will Make Your Home Look SO Much Better
By Dena Ogden
Get Even More From Bustle — Sign Up For The Newsletter