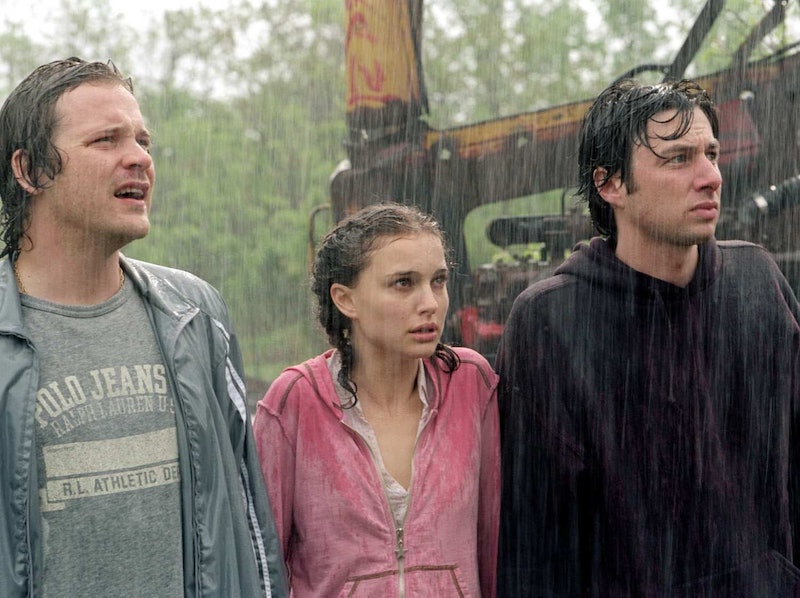 Full disclosure here: when I was an angsty teen, I went to a boarding school. No, it was not like Cruel Intentions, but it was a place where dormers passed around movies like A Cinderella Story and Garden State in an illicit drug-like trade. Little did our feeble teenage minds know, Garden State is a terrible movie (subjectively speaking). A Cinderella Story is passing, but that's a story for another time. When we were high school students living far from home, Garden State seemed to speak to us: Zach Braff was in Scrubs, and Scrubs is really funny. Many kids felt uncomfortable in their hometowns or with their families like Braff's character, Andrew Largeman. We thought this movie was The Graduate of our generation.

It wasn't until I grew into a slightly less whiny adult that I realized the horrible truth: Garden State is not as amazing as my sweaty-palmed self thought. It was then I decided that I would never, ever, watch the movie again (unless it was for the scientific purpose of explaining to someone else how horrible it is). I am sure this hurts some of you, because you haven't taken the leap from child to adult yet (or in my case the tripping, falling slow walk), but I can't un-know what I know now. And I will never judge anyone who loves Garden State as much as I did, but, for these 11 reasons, that time in my life is long past.

We get it. Andrew Largeman is lost and sad. I love me some highly stylized imagery, but the shots in this movie are a little too much for my adult self. I don't need to be hit over the head with stylized imagery to understand someone's feelings of ineptitude.

When we were younger, Natalie Portman's character seemed quirky and great. But then we got older and realized that her character merely existed to help Zach Braff's character embrace life. Thanks for helping to create the manic pixie dream girl illusion, Garden State.

3. Being On Anti-Depressants Isn't Anything To be Ashamed Of

Sure, anti-depressants aren't for everybody, but making them seem like a horrible thing isn't right either. To each their own.

4. The "Life Lessons" Are Weak

Oooh. Life is an abyss, and we have to scream into it, because nothing really matters or something like that. Yeah, life is hard, and sometimes getting your rage out is nice, but it's more interesting to step up to the school of hard knocks and swing back. In other news, I'm pretty sure my AIM away message circa 2008 was "Good luck exploring the infinite abyss."

5. The Soundtrack Hits You Over The Head

OK, so yeah this is a positive of the movie. I love this soundtrack, and it has graced my iTunes for a decade. However, the in-your-face, The-Shins-Changed-My-Life-Let-It-Change-Yours is the opposite of subtle. We understand that Largeman needs an attitude adjustment, but hitting us over the head with it via The Shins doesn't please me. Also using Simon and Garfunkel (The Only Living Boy In New York) is practically begging to be an homage to The Graduate which I do not appreciate.

6. The Romance Is Weak

It feels like Andrew Largeman is looking for a mother substitute after the death of his. He literally goes after the first gal who shoves headphones in his face.

We get it. You're scared of living, Andrew Largeman.The pool is a metaphor for that. This lack of subtlety alone is reason enough to never watch this movie again.

Frankly, it's OK to have a character that is depressed. Depression is very real. However, an entire movie that is just shot after shot of one character looking stoic and bored is not interesting to me anymore. There are much better ways to depict mental illness: for example in Wilfred Elijah Wood's character literally invents a best friend out of a dog to curb his mean reds. Or pill-addicted Dr. House from House who self-hates like none other but still manages to make us love him with his snark. Meanwhile, In Garden State, not even quirky Natalie Portman can make her co-star someone whose emotional issues we can relate to.

9. The Other Characters Aren't Interesting Either

Hello two-dimensional characters that represent people from hometowns. Hello bad boy turned cop. Hello weird kid who made lots of money doing some smart person thing and now throws wild parties. Hello depressed Dad who doesn't talk about feelings. As a narcissistic youth, I thought people in my hometown were not as multi-faceted as they truly are. As a semi-adult, I realize this isn't the case; everyone has a story, but Garden State chooses to ignore that.

10. The Running Through The Airport Trope

Last minute run through the airport to admit love and stay with quirky friend? Check! Snore. That was cute then, but, in a post-9/11 world I'm not buying it. Not even "Let Go" by Frou Frou could save this moment.

11. Service Dogs Don't Do That

Dogs humping people is really funny when you are a child. But, in Garden State, it just feels like a calculated way to set up a meet-cute. Service dogs are trained not to do that sort of thing. And are we really supposed to believe a blind woman wouldn't hear her helpful guide getting down with Largeman's leg?

Of course, these are just my opinions on Garden State — everyone is entitled to their own thoughts on the film. Maybe you'll still like it, which is fine: I don't know your life. and won't judge your choices. However, I think you, like many of my friends who once loved this movie as I did, will find that this look into how vapid suburban life can be does not make you feel good about yourself. It doesn't take away the sads — in fact it just makes them worse. Garden State has no happy ending. It uses "love" as an escape from boredom and depression when the real hero of these should be yourself, not some beautiful human crutch.

This all being said, if anyone from the class of '09 has my copy of Garden State you better cough it up. For...uh...research purposes.