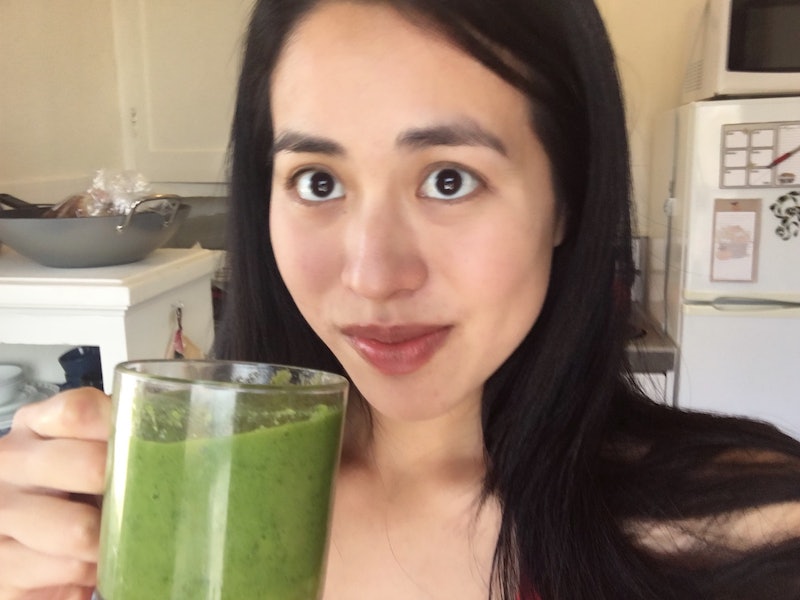 There are what seem like a million recipes for green smoothies all over the internet, and everyone from bloggers to celebrities frequently claim that certain fruits and vegetables will give you a bright, glowing, clear complexion. While clear skin sounds awesome (obviously) and bright skin sounds amazing too (even though I'm not sure exactly how to tell if that's happening), I found these claims highly suspect. I decided to drink a green smoothie every morning for a week to see if it really had any effect on my skin.

After doing some research, I've gathered that achieving a glowing and clear complexion has more to do with consuming more fruits and vegetables (and maintaining an overall healthy diet) and less to do with green smoothies specifically. But if smoothies are a convenient way of getting those vegetables in, I figured it was worth a shot.

I decided to make one smoothie every morning, using the same ingredients pretty much each time. Full disclosure: I definitely didn't change the rest of my diet at all. I did toy with the idea of replacing every meal with a green smoothie, but I figured I'd just be hungry the whole time, and didn't think I could keep it up for a whole week.

I browsed a bunch of recipes online and made a list of the most common ingredients found in "skin-clearing" green smoothies: spinach, kale, apple, blueberries, banana, avocado, and water or almond milk. I tried to figure out a combination of those that I could find appetizing. With a little bit of trial and error, I came up with a smoothie I could tolerate. And so the experiment began.

My Face Before I Started

My face sans makeup wasn't so bad when I started, but there was definitely room for improvement.

I decided to use kale, spinach, an apple, blueberries, raspberries, and water for the smoothie.

It was possibly the worst thing I've ever tasted.

I think it was the raspberries that turned it brown instead of green. It didn't look like it was going to taste good, and sure enough, it didn't. I tried to sip on as much as I could of it, in the name of science.

Instead of sticking to the same recipe each day, I decided to switch things up, but only slightly. This time, I kept the kale, spinach, apple, and water, and swapped the berries for a banana.

It was green this time, at least. But I was still cautious taking that first sip. Here's my initial reaction:

Overall, it was much better-tasting than the previous one. I decided to stick to this recipe.

The experiment didn't feel like such a great idea this morning. It took a couple cups of coffee before I even talked myself into making a smoothie. Then, while I was drinking it, all I could think about was the way the water and green stuff were slowly separating in my cup. It wasn't too appetizing, but I was able to finish it.

Today I decided to try making the smoothie with a little less water. It was thicker, and I ate it with a spoon instead of drinking it. It tasted a little better, since I could stir it to keep the ingredients from separating.

I think the smoothie was too thick this time. It took me a few hours to finish it, because I kept sticking it back in the fridge and doing other things.

Something weird happened to the smoothie this time. I'm pretty sure I put the same ingredients in, but I ended up with a very small, very thick concoction. As usual, it didn't taste very good, but since it was pretty small, I finished with no problems.

And this is the last one! I was pretty excited to be done with the experiment, so I didn't mind that it was a bit watery.

Well, I won't be a green smoothie person, it turns out. They would only help me get more green stuff in my diet if I actually liked the way they taste. It's not going to be helping my skin out very much if I can't finish the smoothies, or if I can't even convince myself to make one.

This is a picture of my face after one week. There's been pretty much no change. This doesn't necessarily mean that green smoothies don't help people get clearer skin. Perhaps one week isn't long enough. Or maybe adding a green smoothie in the morning wasn't enough to counteract all the junk food I ate throughout the day. Or both. Either way, green smoothies didn't have the desired effect on me.