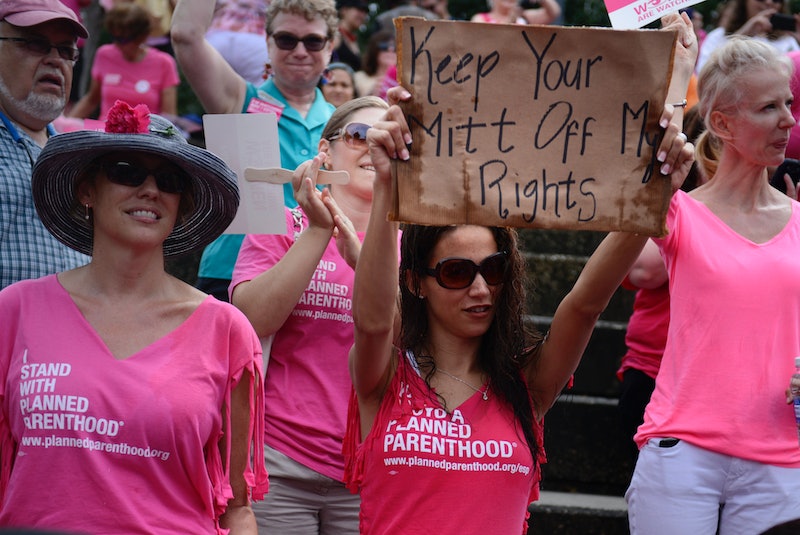 January 22 marks the 43rd anniversary of Roe v. Wade , the landmark decision that allowed abortion to become legal across the entire United States. There are a lot of things happening to mark the occasion — a massive rally to commemorate the achievement at Washington, D.C.'s Supreme Court, for instance, organized by pro-choice organizations from around the country — but it's important to realize that now is not a glorious time for contraceptive rights in America. Ted Cruz, Conservative candidate for the presidential nomination, opposes abortion rights even in the case of rape and incest, and Senate Republicans actually voted to defund Planned Parenthood as a symbolic gesture in December 2015. With the Planned Parenthood shooting in November 2015, a spike in threats against abortion centers in 2015, and 52 percent of all workers at abortion centers reporting they've been targeted or assaulted, being an abortion provider is a seriously risky undertaking.

We're a long way from wider acceptance of abortion rights. But this anniversary can also be the catalyst for you to help out. Stand With Planned Parenthood was a pretty amazing initiative to come out of last year's clusterf*ck; it got many women (and men) together to advocate for the health care provider, which, by the way, does so much more than just provide abortions. But the fight's not over. If you want to make life better for abortion providers in this country — who are literally putting their lives at risk every day — you can do a lot to help: Offer a little time, a little money, a little effort, and you can really make a difference to people just trying to provide legal reproductive health care in the best way they can.

1. Help Any Person Who Wants An Abortion Get The Right Information

Know anybody who may at some point want to have an abortion, or is currently considering one? Make sure they've got the right information, from purely respected, medical sources. A lot of misinformation circulates about how abortions work and what they mean physically, which can muddle the moral issues and make choices less clear.

Excellent and up-to-date medical information is provided by professional sites like Marie Stopes International, the British Pregnancy Advisory Service (BPAS), Canada's MyHealth portal, the UCSF Medical Center, IPAS (which also offers information in Spanish), and the World Health Organization. Make sure your own knowledge about the medical basics of abortion is up to date and that you're not producing any myths for people in need, and direct them to safe and reliable places to get their information. That way, you're not contributing to the misinformation that feeds pro-life arguments and makes the lives of abortion providers harder.

2. Talk About Your Abortion In Public Forums

I personally thought the "shout your abortion" hashtag that went viral in September 2015 was brave as hell, because it did so many things: It demystified and destigmatized abortion, it made it a real experience that happens to real people rather than an abstract concept, and it opened up a conversation that's often had between pundits and other pundits, not people who've had the experience. Being open about this is important. The more awareness and acceptance there is, the easier abortion providers may find it to feel safer.

It takes bravery to be open about this stuff online, but there are different ways of doing it. Personal essays for feminist sites may involve a concealment of your identity; you can talk about it on social media; or you can just comment and add your voice to the abortion stories already circulating in the world. If you don't want to do this, and would rather keep your abortion story to yourself, that's perfectly OK too! There's no right or wrong way to experience this.

Feel like getting out and active? Do some handouts and postering at your local college or public place (with the proper permits from administration and law enforcement, of course). Once you've got your permission, check out the selections available for free download at The Pro-Choice Public Education Project, The Reproductive Health Access Project, and the National Abortion Federation (which provides more education-oriented materials, including textbook excerpts). Get flyer-in'.

4. Volunteer And Intern With Pro-Choice Organizations

If you have more time on your hands, get your voice heard in a more active way with volunteering and internships. Places like NOW NYC have details of rallies and protests that are relevant to the pro-choice cause, while there are long lists at sites like The Pro-Choice Public Education Project of internships and volunteering opportunities in every state. Some are even international, so if you're not based in the United States, you can still take part in helping organizations function properly. What about Voice of Choice or URGE? Get yourself involved.

5. Add Your Voice To Political Lobbying

Lobbying is a lot easier than it once was. Online petition systems deliver our voices directly to politicians and Congresspeople, and it's a lot harder to ignore them when they gather steam and online attention. Planned Parenthood's "stand with PP" petition is still available online, as is the petition to urge Congress to drop a bill related to nationwide abortion bans after 20 weeks gestation.

6. Donate, Even Just A Little

You may not feel like you have any money to spare, but every little bit helps. Whether it's a big national organization like Planned Parenthood or your local abortion and health care clinic, give them a few dollars (even sign up for a regular monthly donation of the same tiny amount) and immediately feel like a better person. In 2013-14, $391 million of Planned Parenthood's income came from donations, alongside $528 million of government funding, so your donation seriously matters. Pretty cool.

This is only if you are a very particular sort of person who can handle abuse from strangers and a bit of physical to-and-fro; it's not recommended if you're going through your own emotional stuff right now. But clinics do often require escorts to take patients in to receive services, running the gamut of picket lines and protesters. It'll give you an entirely new perspective on the whole debate, and will make you feel like a superhero. Which you are, to the people who really need the support.

More like this
'The Capture' Is Finally Back – & S2 Looks Tense AF
By Sophie McEvoy and El Hunt
The Lionesses Are Calling For Equal Access To Football In Schools
By Sophie McEvoy
Kim Kardashian Is Releasing A Line Of Earbuds With Beats
By Alexis Morillo
Gassed Up Promises All Things Action, Risk, & Redemption
By Frances Stewart
Get Even More From Bustle — Sign Up For The Newsletter