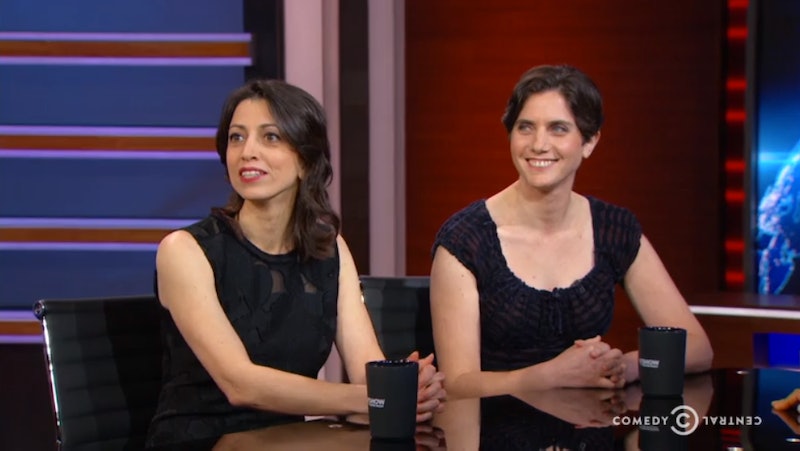 At the center of national hit Making a Murderer is Steven Avery and his story. The Wisconsin man spent 18 years in prison for a crime he didn't commit only to be exonerated for a few short years before being sentenced again, this time for a crime that he again says he did not commit. Though Avery is the main subject of the 10-part Netflix series, he is not the reason why the documentary was created, according to its filmmakers, Laura Ricciardi and Moira Demos. Appearing on The Daily Show on Monday, Ricciardi and Demos explained why they made Making a Murderer, and Avery is apparently just a small fraction of the real reason.

When host Trevor Noah asked the two filmmakers what inspired them to make the documentary in the first place, Demos explains that it was a New York Times headline that caught her attention: "Freed by DNA, Now Charged in New Crime." It was this scenario, and not necessarily Avery's name, that prompted the two to look into the case further. Demos explained:

The more we talked about it, the more it just seemed as if his story would be this incredible window through which to look at our justice system.

Noah asked Demos and Ricciardi to elaborate on the justice system aspect of the documentary, noting that so many people are fixated with just Avery's case. "But that's not why you made the movie?" he asked.

In response, Ricciardi revealed the real reason why they made Making a Murderer:

No, not at all. We did not intend to have an impact on that particular case. Our objective really was ... with 20/20 hindsight, we can really look back at the first case. We knew that the justice system had failed Steven Avery in 1985 and continued to fail him for another 18 years while he was wrongly imprisoned.

What we really wanted to explore and understand was the extent to which the justice system had made meaningful progress since 1985.

And as far as whether the justice system has made any progress, Demos concludes that it has a "long way to go before we can have a reliable system."

Though exploring Avery's case might not have been the main objective, the documentary does delve deep into it, and has garnered the support and sympathy of hundreds of thousands of people along the way. However, Ricciardi was careful to point out that freeing Avery is not their agenda.

We did not set out to prove Steven Avery's innocence; he did. And so we were documenting what he was doing and what his defense was doing.

Essentially, the filmmakers explained, any debate over Avery's guilt or innocence and/or commentary from related players, like ex-fiancée Jodi Stachowski, is really just a tangent from what Demos and Ricciardi were trying to achieve.