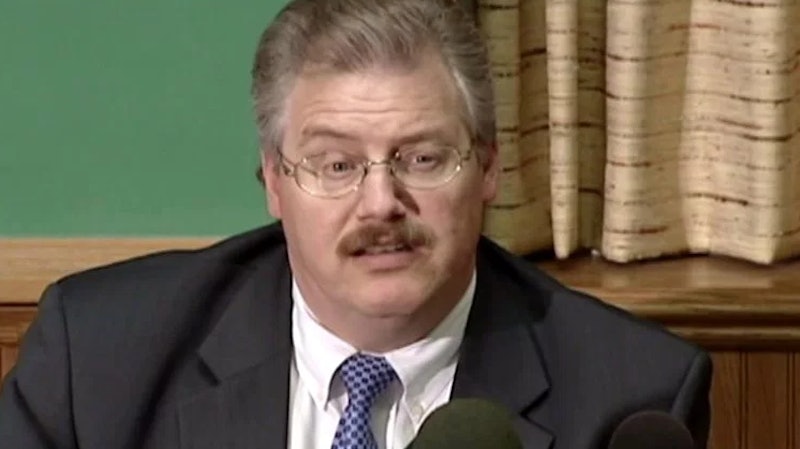 Chances are, if you've watched Making a Murderer, you've come away thinking prosecutor Ken Kratz was, well, a pretty vile human being. That's because he was the series' clear villain, who successfully prosecuted Avery and his nephew Brendan Dassey during a trial filled with arguably questionable evidence. After complaining that the filmmakers left out key evidence, the former district attorney has spoken out again, this time giving his most candid interview yet. Ken Kratz admits that he was "a dick" during the days of Avery's trial, but that he's reformed. And believe it or not, the man's actually kind of hilarious.

So far, Kratz has mostly spoken out about his perceived bias of the Netflix series, insisting that the filmmakers had deliberately left out key evidence to carry out their biased agenda, which was to make Avery look like an innocent man who was framed for murder. (The filmmakers deny this, and have argued that their motivation was to shine light on a corrupt justice system.) Never has the prosecutor actually addressed his own personality, at least not to this detail. Since the show aired in December, angry viewers have called him "sleazy," "corrupt," "a horrible human being," and "scum of the earth." Kratz has even received death threats.

Now, Kratz is clearing the air once and for all. He recently sat down with comedian Jena Friedman for Gothamist for his most intimate confession yet, which he opened with "I was a dick."

Some of that was bravado that was necessary for the presentation of the case, but some of that was me. I think it's important that people understand that I'm not that person anymore.

Much of the ruthless persona viewers saw can be attributed to Kratz's zodiac sign, he tells Friedman.

(Leos are known to be ambitious, pretentious, and domineering.)

And then they decided that July 23 was really in Cancer.

When Friedman asks if he's gained any admirers since the show aired, he says no, to which she points out, "Even Ted Bundy had admirers."

I'm not Ted Bundy. I'm not nearly as charming as he is.

Perhaps the most surprising revelation from the interview is that Kratz is now a defense attorney. His career as a prosecutor ended in 2010, when he resigned from his position as district attorney after a sexting scandal. According to The Associated Press, a domestic violence victim whose ex-boyfriend he was prosecuting alleged that he had sent 30 suggestive texts to her in three days. He allegedly called her a "hot nymph."

After seeking treatment for sex addiction and narcissistic personality disorder, Kratz is a whole new man, or so he tells Friedman. In fact, as a defense attorney, he insists he's more like the heroes of Making a Murderer than viewers would expect.

I've got more in common with Dean Strang and Jerry Buting than I do with the state of Wisconsin right now.

"So you'd want the people watching the documentary to see you as a Dean Strang character?" Friedman asks.