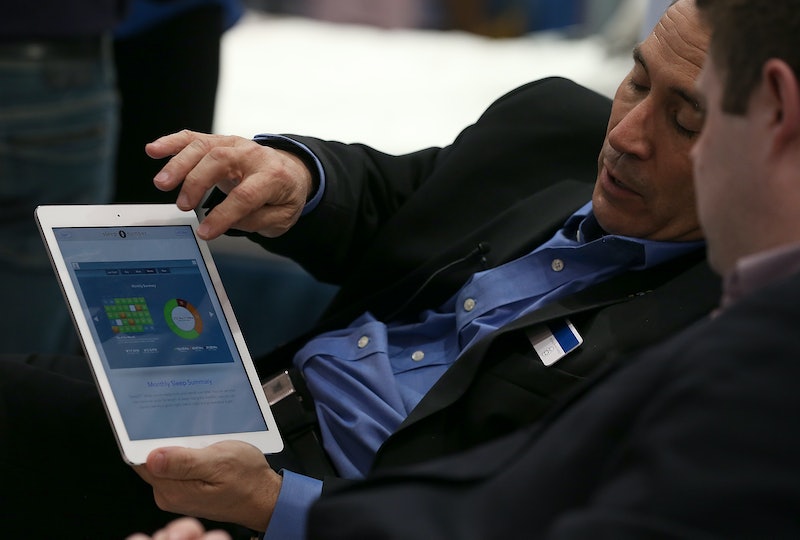 Ok, I'll admit it: I have a serious smartphone addiction. My smartphone is my confidante, my reliable best friend and, yes, my nighttime partner. I will keep it on my bedside table (alright, my pillow), and I will jump, alert, when it buzzes for my attention. But even those of you who don't have quite my level of dependency will probably have checked a work email or two after hitting the sack — as it turns out, though, using your smartphone at night is bad for your sleep and could even be derailing your career. Whoops.

According to a new study, published in the journal Organizational Behavior and Human Decision Processes, checking your smartphone after 9:00 PM messes with your sleep, making you feel depleted in the morning and less productive and engaged at work the next day. And that's not just a screen issue: the study found that, though laptops and TV also had a negative effect on morning energy, smartphones were particularly bad.

The study was conducted in two parts. The first asked 82 upper-level managers to answer several surveys (one in the early morning and one in the early afternoon) every day for two weeks; the second surveyed 161 employees from a wide range of fields. The second group was given the same types of surveys as the first group, but with the added variable of other electronics, like computers, tablets and TVs.

The study found that night-time smartphone use was linked with decreased sleep, and less engagement with work the next day, for both groups — but smartphones were worse than any of the other electronics (and not just because you could be texting in your sleep).

"Smartphones are almost perfectly designed to disrupt sleep," study researcher Russell Johnson, an assistant professor of management at Michigan State University, said in a statement. "Because they keep us mentally engaged late into the evening, they make it hard to detach from work so we can relax and fall asleep."

Part of the issue is the phone's emission of "blue light," which disrupts a chemical in your body that lets your fall asleep. "The light suppresses a hormone that is supposed to tell the brain it's time to sleep. And that hormone is melatonin," Russell Rosenberg, Ph.D., the director of The Atlanta School of Sleep Medicine and Technology told WebMD.

According to the National Sleep Foundation, only 40 percent of Americans regularly get enough sleep. The most commonly cited reason? Using a smartphone to do work. And the lack of sleep is costing the economy costing $31.1 billion a year, just because of insomnia-related workplace accidents, according to a CBS report.

The best solution, according to the researchers, would be for bosses to just agree on specific times for their employees to get online, and send their emails early the next morning. “There may be times in which putting off work until the next day would have disastrous consequences and using your smartphone is well worth the negative effects on less important tasks the next day,” the researchers said. “But on many other nights, more sleep may be your best bet.

More like this
Where Is Former Bachelor Host Chris Harrison Now & What Is His Net Worth?
By Hugh McIntyre
Khloé Kardashian Is Reportedly Dating A Private Equity Investor She Met Through Kim
By Jordyn Tilchen and Jake Viswanath
Here’s What Getting A Tattoo Removed Is Really Like
By Tanya Akim
Trainers Reveal When It's Better To Run Before Or After A Workout
By Carolyn Steber
Get Even More From Bustle — Sign Up For The Newsletter