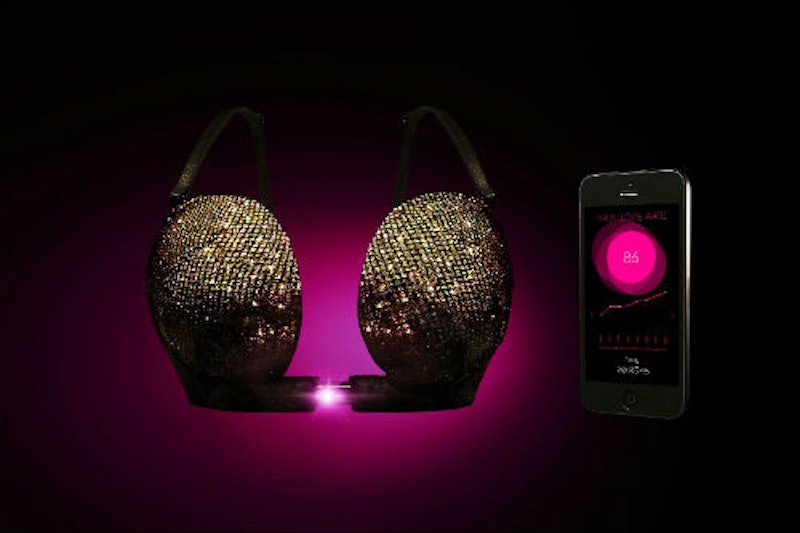 Tired of going to second base with a guy only to realize it's not really True Love? Want to make your breasts into a weird version of the Sorcerer's Stone? Uh, there's an app-bra-thing for that. Developed by Japanese lingerie company Ravijour, the "true love tester" bra can only be unlocked when a wearer is in love, or so Ravijour says. Really, the bra works by measuring heart rate. Whoa nelly should a wearer have stairs to climb.

Japanese website IT Media spotted the bra, in a post which Google has hilariously translated to be titled "World's first 'bra hook does not come off and there is no true love' will be developed." The bra measures heart rate via a hidden sensor chip, then communicates this info to a smartphone app via Bluetooth. When the heart rate goes up enough — reaching the "true love rate" — the bra's hook is automatically released.

According to Kotaku, the he limited edition bra isn't for direct sale but part of a prize package for winners of Ravijour's 10th anniversary "Mood Up" sweepstakes. Kotaku notes that Microsoft is working on a "smart bra" to measure mood, as well, because apparently companies think there's a large market of emotionally-stunted women who need their underwear to clue them into their feelings.

Here's a video that explains more about how the true lover tester bra works.