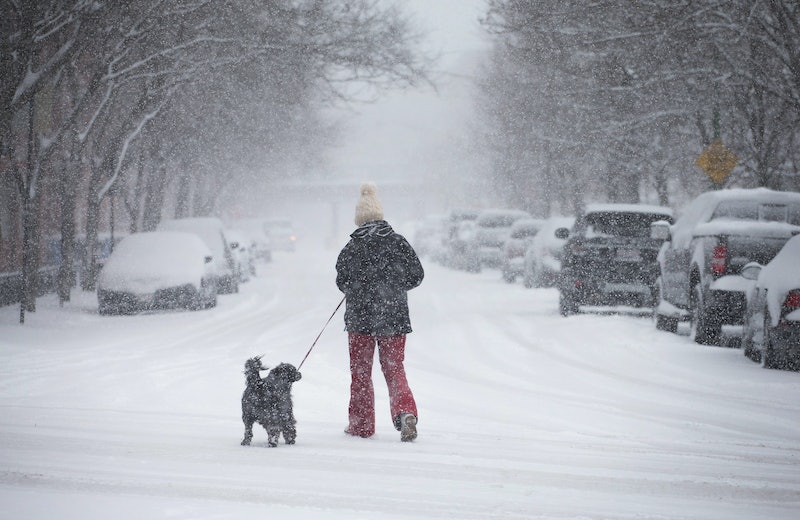 The first major snowstorm of the year may be headed to the Mid-Atlantic and Northeast regions, meteorologists warned on Wednesday. Winter Storm Jonas is projected to hit Thursday through Sunday in large cities like New York, Boston, Philadelphia, and D.C., but could also extend south to cities in Kentucky, Tennessee, and West Virginia. As of now, however, it's too soon to tell exactly when and where Jonas will hit and how much snow he'll bring with him. So in the meantime, as we brace ourselves for potential heavy snowfall, keep yourself warm with these Winter Storm Jonas memes.

Since it shares a name with a certain famous trio of brothers, it shouldn't come as a surprise that the Winter Storm Jonas memes are featuring Nick, Joe, and Kevin Jonas. Even though it has a fun name that conjures images of heartthrobs with bouncy hair and velvety voices, Winter Storm Jonas has the potential to affect 50 million people living in the Northeast, shut down highways and airports, and cause coastal flooding with heavy winds and pounding surf. The National Weather Service predicts "as much as one to two feet of snow" in certain areas.

As ominous as that sounds, the National Weather Service is still calling it a "moderate threat" at this time, since it's too soon to tell any details with certainty. So why wallow in misery or live in fear when you can enjoy the meme-worthy storm?

Even Weezer posted a reference to it on Facebook.

Even back in October, when the Weather Channel released this winter's potential storm names, people were looking forward to Winter Storm Jonas.

Some also referenced Cary Elwes' character in Twister, Dr. Jonas Miller, who happens to be a meteorologist.

So, you see, even if a large swath of the U.S. gets buried under several feet of snow, just these thoughts of the JoBros can help keep you warm. That is, unless, you're a One Direction fan. In that case, bundle up.