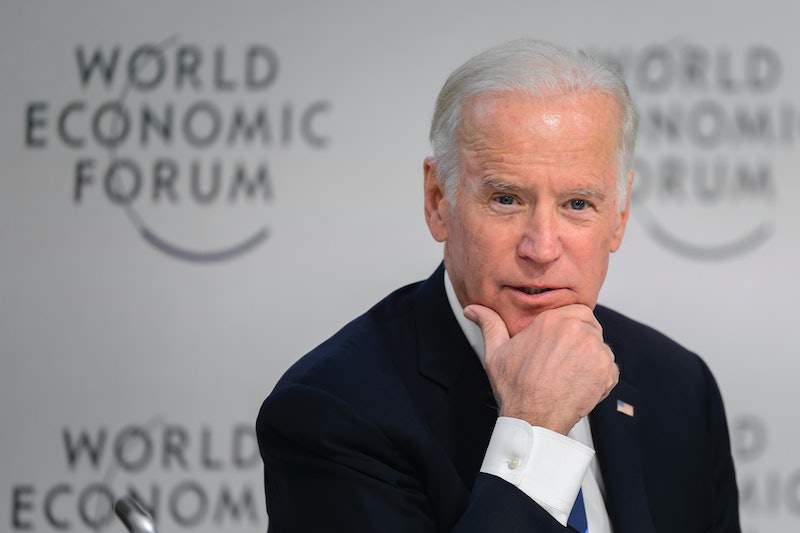 The ever-unpredictable Donald Trump just gave a surprising endorsement for a Democratic rival. The Republican presidential candidate told WHO Radio's Simon Conway that he hopes that Joe Biden will reconsider running for president. It's a rare occasion that whatever comes out of Trump's mouth isn't asinine babble, and his latest comment might even be — egads! — laudable. But even if many of us can get behind Trump's suggestion, Biden is not going to change his mind on one of the most monumental decisions of his life — one that he spent months agonizing over — just because the Donald casually suggested it on a radio show.

If she's indicted ... she wouldn't be able to run, essentially.

However, instead of then commenting on a potential run against Bernie Sanders, who's currently in solid second place behind Clinton in the Democratic polls, Trump passive-aggressively suggested Biden as an opponent:

Maybe Biden. It could be a couple of other people that you and I both know.

First of all, it's very presumptuous of Trump to be talking in terms of when he's nominated, not if, but he's never been one to win any awards for modesty.

Second, we'd all want to see Biden's beaming smile every day in election coverage, but he's certainly not going to be there at Trump's suggestion. In fact, now that he's closed the window on a campaign and has no need to be invested in the election, he's probably learned to tune Trump out anytime he speaks. So Trump's idea likely fell on deaf ears.

Having said that, it doesn't mean that a Biden run is completely out of the realm of possibility. Logistically speaking, it'd be ill-advised to mount a campaign this late in the game, since there are primary and caucus deadlines to consider, but there are no official rules against it. Earlier this month, Biden told local news stations of his decision not to run: "I regret it every day."

Though he also said that it was the "right decision for his family" and himself, he could pull a fast one and suddenly change his mind in the coming weeks. Stranger things have happened — for instance, pretty much anything Trump has ever said or done.