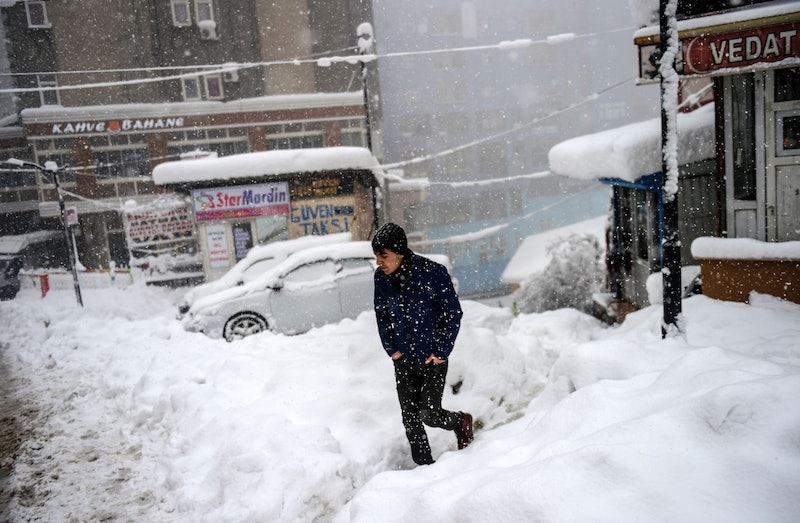 More than halfway through January, it would be reasonable to say the country has fared pretty well as far as snow this winter season. There wasn't much chance of this season beating cities like Boston, which saw record snowfall last year. At the first mention of an impending storm, however, all memory of an easy November and December goes right out the window. And who could blame you? Snow, ice, and wind are no joke. So when will winter storm Jonas hit, exactly?

The storm is likely going to be an all-weekend affair. Friday afternoon is when stormy conditions are expected to really get going, and state officials are already alerting citizens who are in the storm's wide path. And there are a whole lot of states that could be affected by Jonas. Winter storm watches have been posted for some parts of Arkansas, Mississippi, Tennessee, Kentucky, South Carolina, North Carolina, West Virginia, Virginia, Delaware, Pennsylvania, and New Jersey.

Then it's just a waiting game, as Jonas isn't expected to die down until late Saturday or early Sunday morning. Different states across the Mid-South and along the East Coast will face varied conditions, depending upon what path Jonas decides to take come the end of the week. Coastal flooding could become an issue, while areas hit with powerful winds could experience power outages. Did I mention ice and/or freezing rain could be a problem? Yes, that's there too.

For two major cities, meteorologists are forecasting a more intense Jonas-filled weekend. A blizzard watch has been put into effect for the Washington, D.C., and Baltimore metropolitan areas for now. A forecasted combination of heavy snow and high winds has created a higher-level storm watch, as the two together could cause blowing snow and, in turn, seriously low visibility.

And here's what the meteorologists are predicting for snowfall. Folks in Maryland, Washington, D.C., northern Delaware, most of West Virginia and Virginia, eastern Kentucky, and the northwestern corner of North Carolina should prepare for one to two feet of snow. The I-95 corridor, from Virginia through New York, should expect at least six inches of snow.

For some states, like Tennessee, there won't be much time for a needed breather, as Jonas will be visiting just off the heels of winter storm Ilias. Yes, I know. I said the country had done pretty all right up to now. For the record, though, I never said January has been all that easy.

So while the initial thought that your case of the Mondays could be replaced with a more manageable work-from-home Monday was a beautiful one, you're looking at more of a snowed-in weekend with Jonas.

But that's OK. You can now plan for a full Saturday dedicated to rekindling your love with every JoBros song.