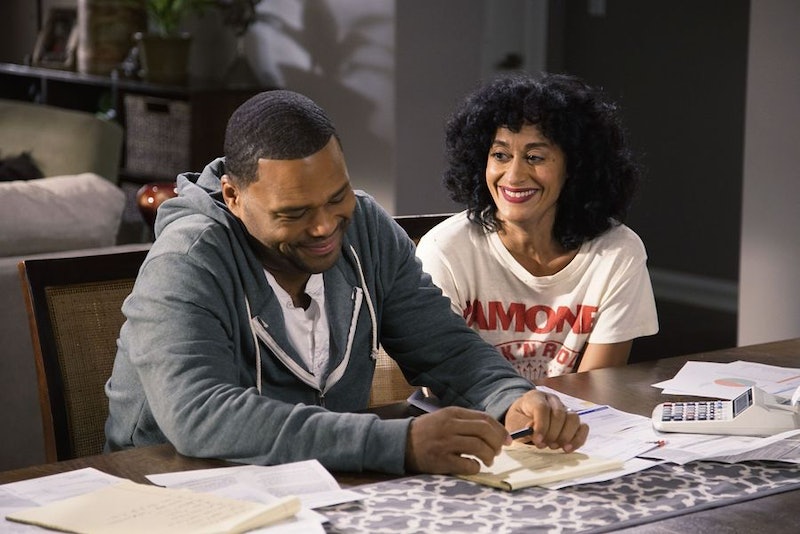 You know what, since black-ish returned from the holidays, the show has been on an absolute tear, and it's all by narrowing in on topics that would be ignored on other sitcoms. But black-ish 's take on money management might very well be its bravest (well, the religion episode was pretty brave too. So was the "parents have sex" episode. Okay, this show can be pretty risky when it comes to its episode premises!). "Everybody wants to have it, but nobody wants to talk about it," says Dre, and he's absolutely right, especially on TV. It's a running joke that every fictional character living in New York City would need an apartment the size of a closet, and show like Modern Family show its protagonists enjoying expensive vacations even though they're supposedly just an average suburban extended family.

But what I appreciated is that the Johnson family is well off, and the show doesn't shy away from that. If anything, their problem is that without being financially strapped, they don't know what to do with their money at all. I appreciate that they even made a point of showing the difference between wealth accumulation, which the Johnsons struggle with, and being broke, which they are not. That makes the episode more insightful and genuine than, say, something like This Is 40, where the characters complain about not having any money, but in a way that's not borne out by the storytelling decisions.

But I do find it believable that while Dre may have a great career and make enough money to live a comfortable life, as a formerly working class kid — and married to Bow, whose mother raised her to believe that talking about money is rude — he has no idea about how to take his money and turn it into way more money, something that his white coworkers begin talking about as though it's second nature, even though it makes Dre and Bow wildly uncomfortable.

Of course, were it not a sitcom, the Johnsons could have easily decided to simply cut down on their expenses without all the silliness. But, of course, they needed some way to get to the big point of the episode: the core of what makes people hesitant to talk about money is fear! And by learning more, maybe we can all stop being so afraid of money and start learning about what to do with it.

And on the "is this a successful sitcom episode" metric, the show continues to shoot for pure silliness with the kids, and Junior's attempt at insider trading is passable but nothing special. However, the running gag of the "hardest working accountant in the business" being named James Brown did make me laugh. And the fact that he's played by the voice of Granddad on the Boondocks just makes the joke even funnier.

More like this
New ITV Drama Maternal Is Lifting The Lid On Life As A Woman In The NHS
By Catharina Cheung
It’s Official: The Bachelorette Is No Longer A Fairy Tale
By Samantha Allen
Beyoncé & Madonna’s “Break My Soul” Remix Honors A Group Of Black Icons
By Stephanie Topacio Long
What’s New On Netflix: 'Never Have I Ever' & 'Indian Matchmaking' Return
By Arya Roshanian
Get Even More From Bustle — Sign Up For The Newsletter