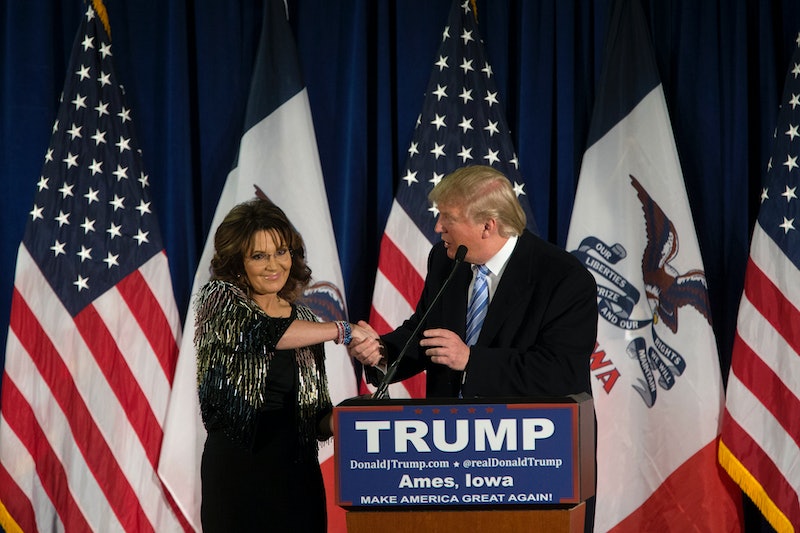 Well, heads are spinning, just as Sarah Palin predicted they would be, with the news of the former VP wannabe's endorsement of Donald Trump for president of these fine United States. Her 20-minute endorsement covered everything from Obama to ISIS, with a little hateful immigration rhetoric thrown in for good measure. Although it's easy to write her off as a sideshow, one of her most viral quotes from the evening shows why we can't do that.

How 'bout the rest of us? Right-winging, bitter-clinging, proud clingers of our guns, our God, and our religion, and our Constitution.

Vines of her self-summary on repeat are filling Twitter feeds and Facebook walls. Her remarks — likely parroting Obama's 2008 "cling to guns or religion" comment — address a significant portion of the American public. These are the people that would actually vote for Trump — as of Wednesday's poll numbers from Monmouth University, some 36 percent of self-identified Republican or Republican-leaning voters.

But despite their small number, this a subset with some fair grievances. Just as Obama tapped into emotions with — as Palin put it — "that hopey, changey stuff" to connect with Americans underrepresented by the Bush White House, Trump is tapping into emotions too. Obama connected with many of the non-white, not-straight men of the country (and a few others, too), but Trump is tapping into those left out not just by President Obama, but also every president stretching back, give-or-take, to Richard Nixon.

Trump's message is a populist one, which means there is a populace that it resonates with. These are the people who have been screwed over by globalization, whose wages have eroded, and who don't have a college degree to hold off the destruction of their way of life — according to a Hoover Institution study released by Real Clear Politics in September half his supporters held just a high school degree or less and they were generally older and poorer than the average Republican. Obama called it during the 2008 election with the problem he referenced with his "clinging to" comments:

These people also "fell through" the Obama administration. Despite the stimulus money that arguably kept the country as a whole from falling off a cliff and despite Obamacare, which to a varying degree of success has made healthcare affordable to these people, the underlying problems haven't gone anywhere. For one some of the key stimulus money for rural communities was never spent, and a Stanford study shows rural disadvantages for Obamacare including higher premiums.

Trump speaks to their frustration on China for stealing their jobs, Mexican immigrants for lowering their wages, and the government for letting it all happen. Whether or not that's true — or whether or not these trends are offset by other advantages — that's how they feel.

These people don't so much deserve our ridicule as our help. Government spending should focus on them too. The OPM (or "other people's money") as Palin called it, should be aimed at rural communities. There's a space here for Hillary Clinton and Bernie Sanders to compete for these voters in the general election, particularly those in rural communities.

Meanwhile, we can hope Sarah Palin — I mean, Tina Fey — shows up on SNL soon.