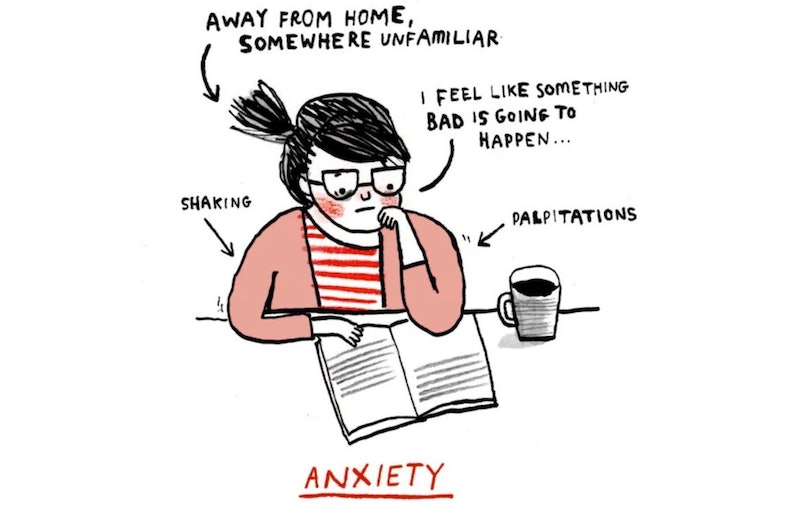 Mental illnesses can be hard to understand; since you can't really see them the way you do a lot of physical ailments, they're often referred to as invisible illnesses. So, in order to bring both some visibility to them and some levity to the situation, artist Gemma Correll comically illlustrated what life with anxiety and depression is like. Correll is a graduate of the Norwich School of Art and Design, with clients including Hallmark, The New York Times, Oxford University Press, and The Observer. Now, she's using her skills as an illustrator — combined with her own battles — to bring light to these invisible illnesses. "I suffer from clinical anxiety and depression and I find that the best way to deal with it is to find humour in it," Correll said recently to Mashable, explaining that finding a way to laugh can sometimes be the only relief you get when you deal with nonstop stresses.

Correll created these entertaining illustrations to hopefully break down the stereotypes and stigmas that shadow depression and anxiety. She also hopes that her art will create a discussion for people suffering from these disorders, making them more comfortable to speak openly about it. "I do think that people should speak more freely about anxiety ... the kind of anxiety that really affects your life and decisions." Correll's sense of humor (clearly on display over at her website) and her skills with the pen can also be viewed on her official Facebook page.

Correll's sketches are truly one of a kind, the playful cartoons typically addressing some deeper meaning. She even keeps a daily diary with amusing drawings and witty captions, communicating how her day is moving along.

I was really moved by her work. People often equate depression with sadness, but it's so much more than being sad. It's a hopeless, empty hole that you can't figure out how to get out of, and couldn't muster the motivation to do so even if you did have a clue. And it's typically something you endure in solitude, because depression doesn't exactly turn you into a social butterfly. Depression affects nearly 15 million American adults, many (if not all) of whom are struggling to find a way out. Despite the fact that anxiety and depression are very serious diseases, I love Correll's lighthearted approach that makes them a little easier to talk about.

Visit GemmaCorrell.com or Gemma Correll on Facebook to see more of her work.