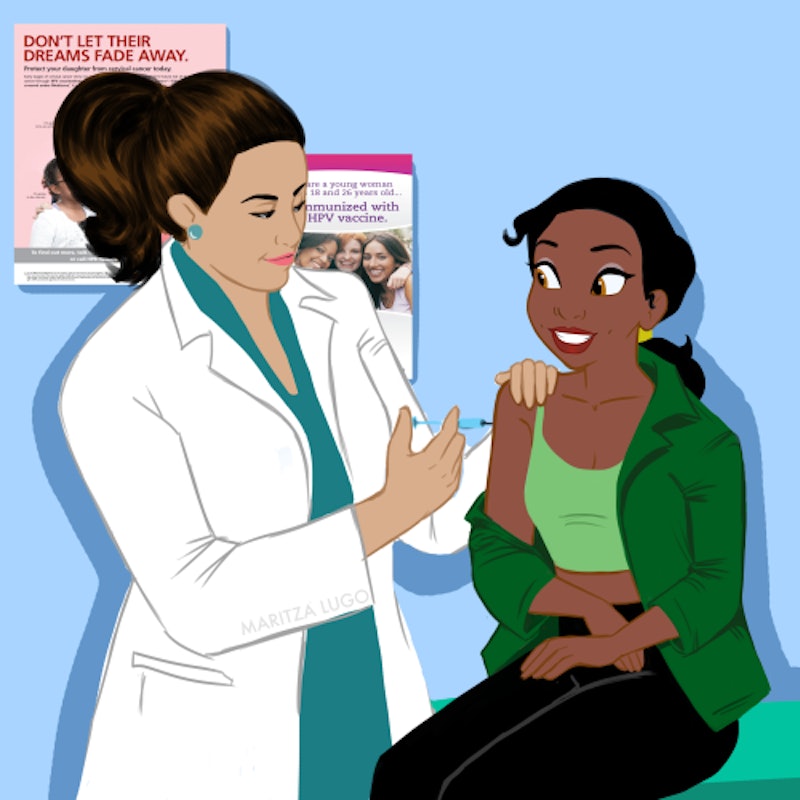 January is Cervical Health Awareness Month — but I wouldn't be surprised if you didn't know it existed, considering the massive amount of stigma that still surrounds women's reproductive health. This stigma is exactly why sex education activist Danielle Sepulveres created a series of illustrations showind Disney Princeses at the OB/GYN, taking care of their cervical health by doing things like getting an HPV vaccine, picking up emergency, contraception, and getting blood drawn for an STD test. Even Belle, Jasmine, and Mulan need access to reproductive healthcare!

Sepulveres teamed up with illustrator Maritza Lugo to create the images, which were inspired by the media's lack of coverage of Cervical Health Awareness Month. “January is almost half over and no lady editors have run anything substantial on cervical health awareness,” she wrote in a tweet earlier this month. It's frustrating to see an issue as important as this continue to get rejected from our health conversations; HPV and cervical cancer affect more than 79 million American women, according to Healthfinder.gov.

The lack of conversation about the topic led Sepulveres to the idea of creating comics of Disney Princesses receiving reproductive health treatments — nothing gets a conversation going like Disney Princesses embued with a major message. “Almost every day my timeline on social media is bombarded with re-imagined Disney Princesses in one way or another, and most people get a huge kick out of it. So one day it hit me — had anyone ever drawn them going to the gynecologist before?” she told Forbes recently in an interview.

She also thought about how women could identify with these images, as many of us have a powerful childhood connection to the characters. "I've always believed that we have our own individual favorite Disney Princesses because they represent the best parts of ourselves or how we want to be," Sepulveres tells Bustle via email.

Sepulveres herself has been affected by HPV; her memoir Losing It: The Semi Scandalous Story of an Ex Virgin chronicles her emotional journey being diagnosed with HPV. Since then, she's become a sex education activist, teaming up with organizations like Cervivor to help spread awareness and squash stigma related to HPV and STIs. "I think that one of the things that happens with HPV and cervical cancer is this stigma and shame or embarrassment that doesn't happen with other kinds of cancers. People don't talk about it, but it should be discussed because it's so prevalent," she told the Huffington Post.

She's right that this is a prevalent STI— actually, it's the most prevalent one. In fact, most men and women will be affected by the human papilloma virus at some point during their sexually active lives, according to the CDC but it won't cause cancer for most and the body will clear the HPV out on its own. However, it's not like that for everyone and there's no way to know whether or not yours could develop into cancer. Time also isn't on your side, as it can take decades for HPV to cause cervical cancer.

The good news is that HPV is completely preventable; vaccines have been developed that will keep you protected from it. It's recommended by the CDC that everyone get the vaccination.

Sepulveres and Lugo's re-imaginings of Disney Princesses remind us that there is no shame in taking care of our bodies, even though we've been taught to fear STIs and never talk about the medical realities of sex. "The best thing we can do for ourselves is take care of our health," Sepulveres tells Bustle, and I couldn't agree more.