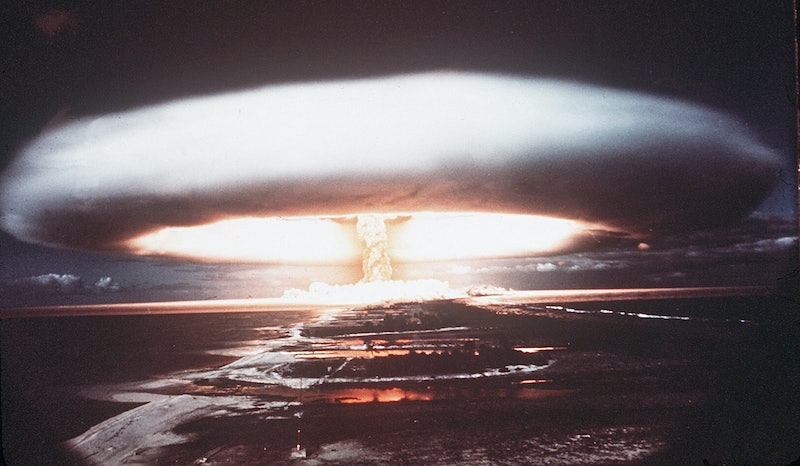 In recent years, theoretical scientist Stephen Hawking has become a bit of a downer. His warning that continued development of artificial intelligence spells trouble for mankind was akin to the call of a sad trombone for those of us excited to see what Roomba, the vacuum cleaning robot, would evolve in to. The scientist's latest prediction? That humankind is its own worst enemy. Hawking said man could destroy the world within the next 10,000 years through continued advancements in science and technology while speaking at the BBC's annual Reith Lectures earlier this month.

The end of the world has long been a morbid obsession for humans, with dozens of films focusing on an apocalypse or imagining a post-apocalyptic world rolling out to theaters with some regularity every decade since the 1950s. Over time, Hollywood appears to have thought of every imaginable way the world could end from colliding with a star to a solar flare to radiation poisoning.

Hawking's predictions for how humans will cause the end of the world (or at least the end of mankind), while a bit less wild and fantastical than what's offered up by Hollywood, are perhaps even more frightening as they come supported by scientific.

In 2014, Hawking shocked many in the technology industry when he told the BBC his concerns that continued efforts to develop artificial intelligence would have disastrous consequences.

The development of full artificial intelligence could spell the end of the human race. It would take off on its own, and re-design itself at an ever increasing rate. Humans, who are limited by slow biological evolution, couldn't compete, and would be superseded.

Hawking has been speaking out about global warming and the effects of climate change for nearly a decade, so it comes as no surprise that he highlights it as a potential catastrophic end for humans. In Leonardo DiCaprio's documentary film The 11th Hour, Hawking described a future where temperatures on Earth reach levels unable to sustain human life:

One of the most serious consequences of our actions is global warming. Brought about by rising levels of carbon dioxide from the burning of fossil fuels. The danger is that temperature increase might become self-sustaining if it has not done so already ... We don’t know where global warming will stop. But the worst case scenario is that Earth will become like its sister planet Venus with a temperature of 250 degrees Celsius and raining sulfuric acid. The human race could not survive in those conditions.

Humankind's natural tendency toward aggression combined with technological advancements that have made nuclear war possible are a major cause for worry, according to Hawking. The scientist took up the topic with a college student early last year, according to the Independent.

The human failing I would most like to correct is aggression. It may have had survival advantage in caveman days, to get more food, territory or a partner with whom to reproduce, but now it threatens to destroy us all ... A major nuclear war would be the end of civilization, and maybe the end of the human race.

Hawking has also warned against the development of genetically engineered viruses, claiming they have the potential to wipe out mass groups of people. Tinkering with genes in an effort to solve some of medicine's biggest mysteries comes hand in hand with the consequence of producing antibiotic-resistant strands.

But humans might have one last shining beacon of hope on their side, according to Hawking. An ace up the sleeve if you will: life in space à la The Jetsons. Hawking said that while humans are likely to bring catastrophic disaster to Earth within the next 10,000 years, humans should have developed the ability to live in space by that time.

Still the scientist ended with thoughts more in line with his typical cynical leanings, adding, "We will not establish self-sustaining colonies in space for at least the next hundred years, so we have to be very careful in this period."