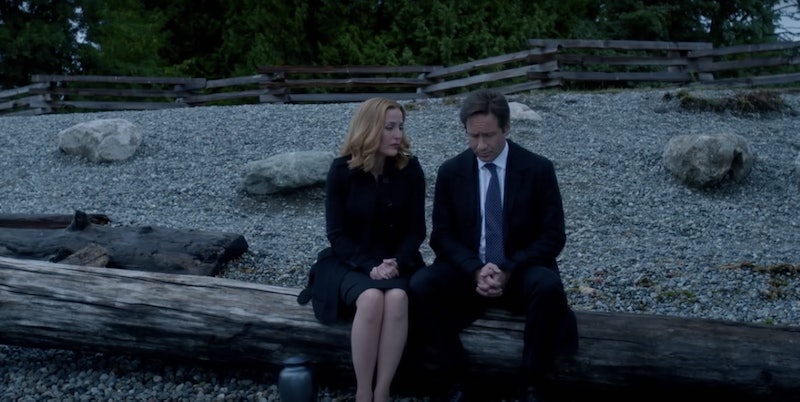 During its nine memorable seasons, The X-Files brought me to tears more times than I can count. But, if I had to choose the most heartbreaking plotline, it would be the story of Mulder and Scully's son, William. It's been awhile, so here's a refresher (just make sure you have your tissues handy) — Scully desperately wanted to be a mother and the pair made a number of unsuccessful attempts to conceive. Mulder urged her to "never give up on a miracle" and she ultimately became pregnant and gave birth in Season 8. But, Scully didn't get her happy ending — while Mulder was in hiding, she realized that her "miracle baby" was likely part alien and therefore at risk. In order to protect William, she gave him up for adoption and the loss of their child has haunted Mulder and Scully ever since. So, when the show returns, is there any chance that William will appear on The X-Files?

It's unclear whether or not William himself will make an appearance, but he will certainly be important to the plot. In an extended promo released by Fox in December, William is mentioned multiple times and it seems like we may finally get some answers. It was implied during the original series that Scully's fertility problems were related to her abduction and her subsequent battle with cancer. Later, we learned that her pregnancy may have been triggered by an implant placed in her neck during her abduction — which would explain why William exhibited supernatural abilities. But, although Scully's abductees may have caused her pregnancy, Mulder and Scully described William as "our son" in both the series finale and the 2008 film, I Want To Believe.

In the extended promo, Chris Carter acknowledges that showrunners kept the details of William's conception deliberately vague, and he provided the teaser that "it becomes a larger question as we move forward." Brief clips shown in the promo make clear that both Mulder and Scully are plagued with ongoing guilt and grief. And, I'll be keeping my tissues close by during this miniseries, because the conversations will definitely be heart-wrenching. A visibly distressed Scully tells Mulder that, although she knows the adoption was for William's safety, she still hates herself for it.

William would now be 15 years old, and it would certainly be interesting to see his character make at least a brief appearance. Firstly, Scully still doesn't remember the details of her abduction and William's DNA could provide clues about what happened to her and her fellow abductees. But, more importantly, neither Scully nor Mulder has had any sort of closure when it comes to the loss of their son — and it's probably one of the things that took a toll on their relationship. It may be too late for this separated family to have their happily ever after, but seeing their son and knowing he's safe could help both Mulder and Scully move forward and feel a sense of peace.

Although nothing is confirmed, I think the strong focus on William in the promo indicates that showrunners plan to finally provide some answers to viewers and his parents. For Mulder and Scully's sake, I hope they're allowed to at least see their son and feel reassured that he's OK and they made the right decision.

More like this
The 'House Of The Dragon' Showrunners Revealed One Key Similarity With 'GoT'
By Grace Wehniainen and Kadin Burnett
An Ultimate Guide To The Music Of 'Rap Sh!t'
By Brad Witter
Here’s How 'House Of The Dragon' Diverges From The Book’s Timeline
By Allyson Johnson
Does The 'Echoes' Ending Mean There Will Be A Season 2?
By Kadin Burnett
Get Even More From Bustle — Sign Up For The Newsletter