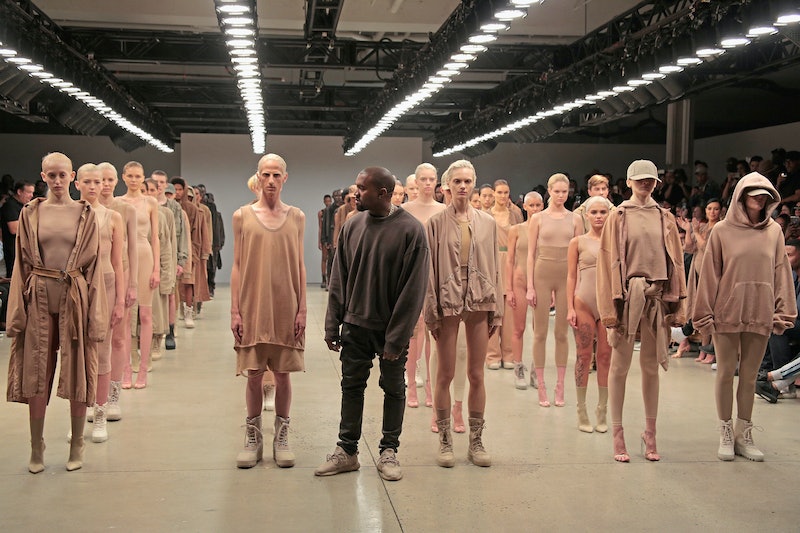 It's official: Yeezy Season 3 is almost here, and it looks like the big reveal will be hitting the Fashion Week runway. According to a cryptic Twitter post, there's hope that the third round of 'Ye creations will be here in early February — the exact same day as his rumored album release. Typical Kanye!

There was never really a doubt in my mind that Kanye would create a third season of his popular Yeezy collection, but the actual release date has been top secret until now. The rapper posted a photo on Twitter of one of his #squad members in the studio in front of a computer that seems to hold all the Yeezy secrets. When looking closely, you can see the words "Yeezy Season 3" next to the date February 11th on the computer screen. That just so happens to be the first day of fashion week as well as the day that Kanye is supposedly releasing his latest album Swish.

Kanye loves to leave vague hints about pretty much everything to get the speculation flowing, so it wouldn't surprise me if this really was his unofficial way of letting his fans know that the show will go on. He really does have his own way of doing pretty much everything. Check out the cryptic photo below.

This isn't the first time that Yeezy announcements have been made via Twitter. Kim Kardashian's recent tweets confirm that the third season of clothing styles are almost complete. There's no telling whether they'll be the same styles that were seen during the first two shows, but hopefully someone in the family will post about it soon.

A fitting must mean it's almost ready to go, which means the Twitter photo holds some truth. Let's just hope Yeezy Season 3 is cheaper than over-price others.

More like this
Dua Lipa’s Best Looks From Her ‘Future Nostalgia’ Tour
By Dominique Norman
Twitter Has *A Lot* To Say About Justin Timberlake’s Beat Ya Feet Dance
By Sam Ramsden
The Best Memes & Tweets About Beyonce's New 'Renaissance' Album
By Radhika Menon
42 Black Owned Fashion & Beauty Brands To Support Today & Always
By Mekita Rivas, Shea Simmons, Kui Mwai and Dominique Norman
Get Even More From Bustle — Sign Up For The Newsletter