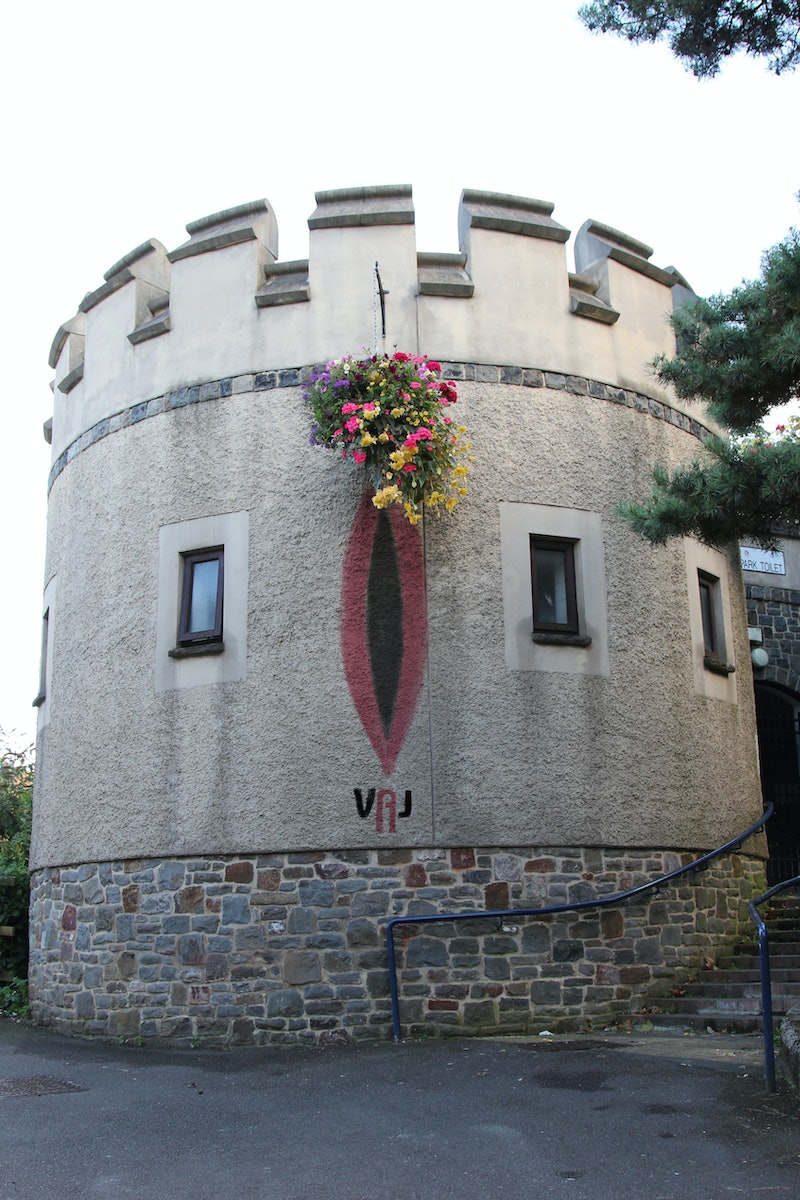 In the graffiti world, you can't swing a stick without hitting a spray-painted dick — walls, tunnels, and subway stations in the United Kingdom are literally teeming with doodled phalluses. But feminist street artist Vaj Graff has set out to correct this imbalance, most recently by giving a historic Queen Victoria statue a full bush. She also gave Her Majesty a pair of naked legs and what appears to be a belly button but, if we're being honest, people are far more preoccupied with the new pubes on Britain's second longest-reigning monarch.

According to the 26-year-old street artist from Bristol, she felt compelled to "redress the balance" after a lifetime of being assaulted by phallic street art that she points out is disrespectful, aggressive, and dominating. And as far as those claiming her work is vulgar — because God forbid women are portrayed with something other than Barbie parts or smooth bits — Vaj remains unbothered. "Everyone's got something to say, so they should say SAY IT. There ain't enough female street artists. FACT. That's gotta change. I don't give a f*ck if I agree with anyone else or if they agree with me, if I got something to say then I'll spray paint it. EVERYONE should do the same," she tells Bustle via email.

The makeover of Queen Victoria isn't the first (and undoubtedly won't be the last) spray-painted stab the Bristol native has taken at the patriarchy of street art. In fact, as far as favorite forms of expression go over the years, Vaj shared in a perfectly lippy response — pun wholeheartedly intended — "Queen Vic's vaj is about halfway up." Vaj's other installations include a lady with her legs spread and a lager in hand, a woman peeing on the street, and the delightfully colorful clit-adorned castle seen up top here. When asked how she decides what will make the best canvas for her feminist art, Vaj kept it succinct, saying, "See it, lock it, spray it," although she did reveal to Mic that she doesn't just tag things at random. Every "thro up" has a message.

While female street artists such as Vaj are on the rise, there is still a distinctive gender parity in the art form. Not only is male iconography such as the penis overwhelmingly prevalent in street art, but you also tend to hear more about male street artists like Shepard Fairey, Blu, Roa, and Banksy. What's more, male artists who have featured female anatomy in their work have historically been lauded as feminist, even when that wasn't the artist's intention — think Gustave Courbet and Alfred Stieglitz. Yet when a female artist does so with feminist intentions, it often isn't received favorably.

In case you haven't picked up on it yet, though, Vaj DGAF about what other people's perceptions and or misconceptions are.

"I dunno about this academic bullsh*t (who the f*ck is Alfred Stieglitz?)," she says. "The feedback I'm talking about is from c*cks sprayed on bus stops, get me? It's pure STREET feedback. All I'm doing is evening out the balance, for every c*ck there should be a vaj. That's NATURE, innit?"