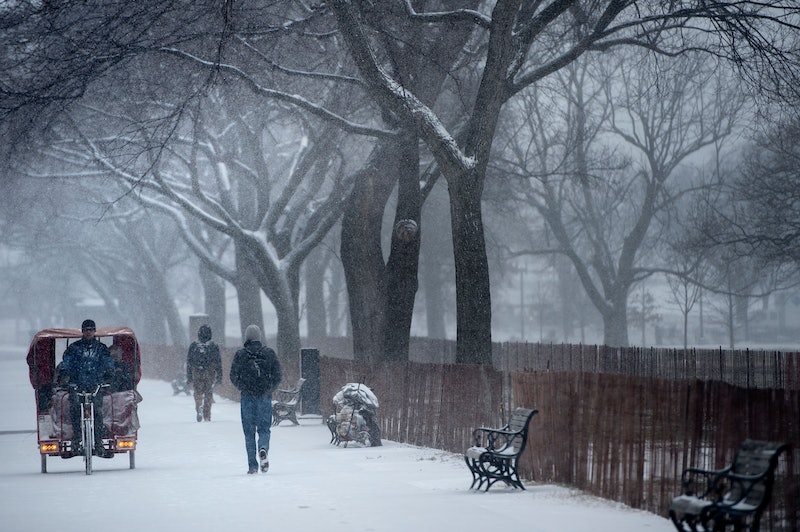 Up until recently, major winter weather events were referred to more as headaches than with proper names. Snowmageddon seemed like the first blizzard to show up with a name. Last year's Super Storm Juno never quite delivered on its hype but people certainly latched onto its moniker. As yet another storm bears down on the East Coast, many are wondering why it's called Winter Storm Jonas? Though the weather is certainly something serious, its naming process is a little less formal.

Hurricanes and tropical storms have received formal names for years from the National Weather Service, which began doing so as a service to the general public in times of emergency. The naming of tropical cyclones has its own contentious history and the NWS firmly set on a pattern of a rotating list of male-female alternating names for storms in 1979. The widespread use of winter storm names and, really, the names themselves didn't come about until 2012 thanks to The Weather Channel. Taking that same logic of using a name to better inform those who may be affected by severe weather, the network released a list of names and has done so henceforth. In a press release about the initial naming, The Weather Channel had this to say about their qualifications:

The Weather Channel has the meteorological ability, support and technology to bring a more systematic approach to naming winter storms, similar to the way tropical storms have been named for years.

As you can see by my fairly excitable tweet, The Weather Channel has enlisted the help of others to name winter storms. It's a slight difference from the inaugural year list, which featured both Athena and Caesar. The two styles certainly have much in common for their ancient origins, however. In 2013, the Bozeman High School Latin class helped develop the list of winter storm names alongside The Weather Channel. They were honored with Bozeman being included in the 2014 list. Their efforts came in handy yet again this year and you can thank the Bozeman High School Latin class for adding "Yolo" to the 2015 list of winter storm names.

The Weather Channel has been criticized for naming winter storms, with some wagering that it would confuse the general public, especially when other weather channels have also taken to naming winter storms. Last year's Super Storm Juno had an entirely different name if you were a viewer of Connecticut station WFSB, who had taken to calling the storm "Colbie" in honor of singer Colbie Caillat. The CNN affiliate had reportedly established a history of naming winter storms — something The Weather Channel appears to have taken over. No matter what you call it, the blizzard affecting some 50 million people appears to be one the nation won't soon forget.