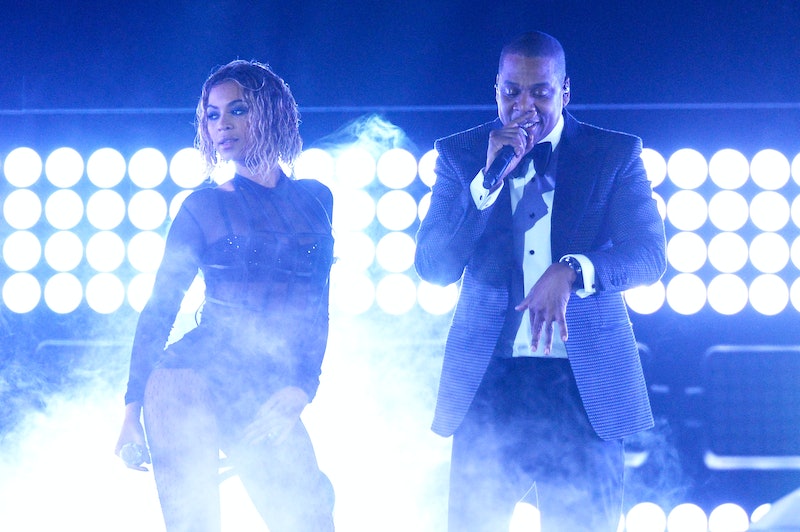 Like Anna Kendrick stated during her time at the podium with Pharrell, "they were fine," but allow me to be the bad guy in the room and go on step further: could that Jay Z and Beyoncé Grammys performance of "Drunk in Love" have been a more boring way to open up the 2014 Grammy Awards? Considering the fiery showmanship we're used to from the Queen Bey and her unending conquest of the known universe's aural pleasure — to say nothing of the hype surrounding the rarity that is Bey performing with husband Jay Z — it's super upsetting to have to be the one with the unpopular opinion that is: that chair-dancing, sparse and slinky performance was snoozeworthy at best.

Beyoncé with her greasy-hair-don't-care felt more like a slow advertisement for baby oil than a show-stopping performance from the king and queen of music today. By showcasing her most blasé dance moves, Beyoncé half-heartedly slunk around the stage and occasionally threw herself upon a single chair on the stage while the audience waited for the moment where it would explode. Instead, what we got was a writhing fishnet bodystocking propped up by the anticipation of Jay Z's — and in turn/hopefully, the song's — showstopping arrival.

Ultimately Mr. and Mrs. Self-Impressed moved the wriggling and writhing from the chair to each other, just in case there was someone out there in the universe that wasn't aware that they have sex with each other, and are very lucky to do so. Butt grabs! Twisting and turning! The knowing, sassy saucy side-eyes! We get it, you guys! Your genitals touch. Good for you. Congratulations, really.

This wasn't a performance of music, it was a performance of bravado and a reminder that Queen Bey might be the people's Fierceness, but sometimes even the most celebrated and hyperbole-ridden egos in show business can make a dud. A big, overtly sexual dud that feels more masturbatory than musical.

But don't take our word and Taylor Swift's whitest white girl dancing for it, take a look at the performance and decide for yourself.