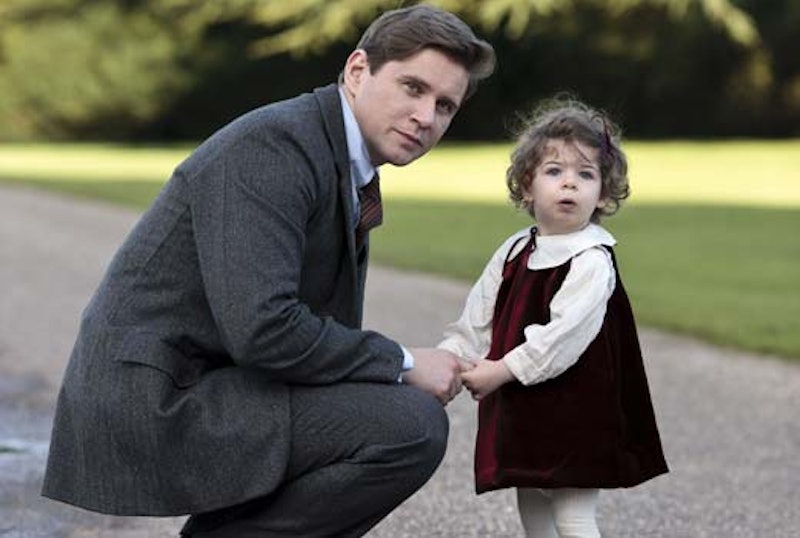 Episode Four of Downton Abbey continued the fourth season’s trend last night of focusing in on the downstairs staff, with Anna finally telling Bates the truth about her rape, Alfred taking the Ritz exam, Thomas’ scheming with Baxter, and the return of dear old Molesley. Molesley! The current and former staff continued to steal the show when Tom dropped the bomb late in the episode when he revealed he may leave for America with Sybil.

Upstairs, the Granthams were working toward new beginnings while struggling to let go of the Abbey’s long history. Mary and Tom moved forward with leasing the land, Lord Grantham paid out of his own pocket so the farmer Mr. Drew could remain on the property, Violet and Mrs. Crawley bickered over the new gardener/ possible letter opener thief (#fancypeopleproblems), and Mary choked back tears when she heard the news that Gillingham’s engagement was officially announced.

And just as soon as we see Mary being honest with herself about her feelings, another new suitor strolls on in to the Abbey. This time it’s Mr. Napier, a gentleman surveying the area for damage by the war whom Mary knows quite well...and she insists that he stay with them rather than in town. Cheeky, cheeky, Mary. It was actually quite shocking to see her smile and greet him so exuberantly. It’s such a rarity for her character, it almost looked painted on.

Brokenhearted over Anna’s decision to move back into the house, Bates forced Mrs. Hughes to tell him the truth with an ultimatum of his resignation. His heart immediately sunk and he shook as he begged for answers as to who it was. And though he knew full well it was the sickening Mr. Green, Hughes swore on her mother’s grave that it was an intruder in order to protect Anna’s wishes.

Bates then quietly and kindly approached Anna as she shined shoes relentlessly — holding her hand he simply stated, “I know.” Though it was sweet how he made her feel loved and comforted, it was a bit troublesome that he told her what happened to her made her more higher and holier to him. That whore/madonna complex ...yeah. Anna had to painfully defend her rapist to her husband’s face, and Bates assured Mrs. Hughes that they were moving forward together, in a threat that would make Liam Neeson quiver in his boots, he promised that the manhunt was far from over. We’ve already suffered seeing Anna’s attack and watching Bates cry, haven’t we all been through enough!? But oh JUSTICE, and how badly it must be served. We’re with you, Bates.

Hughes isn’t the only stallworthy lighthouse in the turbulent seas of downstairs drama. Carson proved to be quite the mentor to Alfred. He was encouraging as Alfred prepared nervously (and adorably) for his test and first trip to London. And then lended a bit of tough love and confidence when Alfred recieved post that he did not pass the exam. Sure it’s sad, but squee! We get to keep him! Oh...poor Molesley, you were supposed to get his job if he left...blast!

Now of course Downton couldn’t leave us without a cliffhanger. Tom admitted to the Granthams that he is a “Man without a state,” and feels out of place (You and Mrs. Crawley, my good man) in both the upper class and amongst the staff. Then,m he announced he may move to America with his daughter. Come on Tom, don’t leave us too! We don’t care that you’re a socialist. On to next week to see just what Thomas is trying to scheme in on with Baxter as his mole and how new technology will consistently scare the living daylights out of Mrs. Patmore.