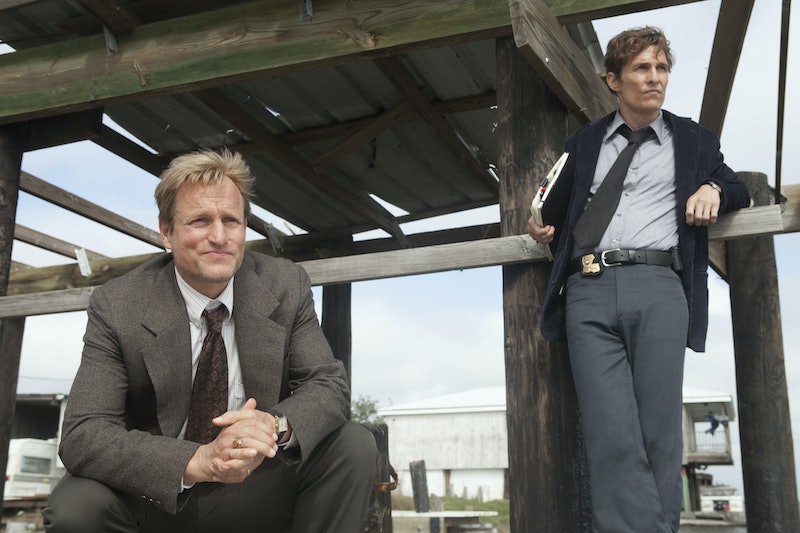 Though HBO's True Detective deals in common cop show currency — vicious villain performs wildly sexual crimes on downtrodden women while two young cops try to pin him down — it’s established itself as something other. While we’re solving the crime of Dory Lange’s mysterious and ritualistic death, we’re also solving mysteries of existence that drive humans to commit and become subject to such atrocities. We’re going deeper.

Sunday night’s “The Locked Room” went for reality’s gullet, making a pit stop in the show’s already glaring target: organized religion. It seems fairly clear that Matthew McConaughey’s Detective Cohle is the true voice of the inaugural outing of True Detective. While his ideas come in more than stark contrast to the rest of the small Louisiana town in which he works, it’s his “truths” that are leading him and Hart (Woody Harrelson) on the right path. He’s crazy like an unflinchingly clear-headed fox.

Of course, his successes don’t come without resistance — mainly from Hart himself. We open on the tented church that our detectives sought out last week when they found a burned down chapel with painting matching the pose and set-up of Dory’s final resting place. Now, they’re listening to Dory’s pastor’s sermon, all the while Cohle states what a fallacy the entire set up is, while Hart extolls its virtues as a sort of lock box on society — keeping the crazies and violent folks at bay.

“If the only thing keeping a person decent is the expectation of divine reward, then that person is a piece of shit,” declares Cohle, and it’s clear we’re half expected to applaud this rather infallible stance. His point: If religion squashes unsavory urges, it just hides them and forces them into other crevices. The bad parts are still there — they’re just harder to find. Naturally, that means Cohle is looking for a suspect among these people who follow the pastor like sheep, laying their problems into his rhetoric, or as Cohle puts it, telling themselves “stories just to get through the day.”

With an APB out on men fitting that description, the episode turns inward and delivers more comparisons between the seemingly straight-laced Hart and the unconventional Cohle. In 2012, the detectives question Hart about his partner, suggesting that with all his strange ways, Cohle was trying to strong arm the investigation towards some sadistic idea in his head. Hart insists that as strange as he seemed, Cohle turned out to be right.

Still, past Hart would have assessed Cohle just as the modern-day investigators have. We find Cohle visiting Mrs. Hart one sunny afternoon when Hart isn’t home. She’s trying to help him come out of his “shell” by convincing him to get a pet or a friend and to stop expecting to lose people. Hart comes home and has no capacity to see Cohle’s visit as anything other than an affront on his manhood: he sees things in black and white and an attempt to take his place with his wife is all this can appear to be. But as we know, the last thing on Cohle’s mind is sex with anyone — his partner’s wife or the hooker who offered herself to him.

When Cohle leaves, we’re left with Hart family time, where we learn that Hart’s daughter, likely the one who had her dolls in sexual positions last week, was caught drawing sexual positions between a man and a woman. Hart and his wife confront her and she simply says that the girls at school told her to draw them – she has no idea what these drawings actually mean. Hart, whose grasp on love and sex is clearly deficient, has no idea what to do with this information — especially after his wife simply asserts that girls learn about sex earlier than boys “because they have to.”

This situation is outside of his realm of understanding, so he shuts down, prompting his wife to ask why he continues to shut her out. His only answer, cobbled together after a lengthy bumbling session is that he’s “fucked up,” and when she replies with affection and sex, things make sense to him once more. Never mind the fact that he’s got another woman on the side and that he lacks a capacity for understanding things outside of the realm — and boundaries — that he knows and prizes so greatly.

It’s these boundaries that he’s so stuck in that make him defer much of the investigating to Cohle, who we learn is a suspect whisperer. We skip ahead to Cohle and Hart investigation the suspects pulled in with the APB. First up is a burglar whose signature is jacking off before leaving every crime scene. Hart sees the guy as a laughable pervert, but when Cohle gets in the box with him, it’s clear he understands the seemingly cavernous recesses of his mind: Cohle tells the kid we can’t control what we feel and that the only way to get past it is to ask for forgiveness. The kid asks how he can confess, he’s ready to move on. Explaining how he gets to their inner selves so quickly, Cohle says that it’s visible in their eyes. “Each one is sure of their realness — so certain they’re more than a biological puppet.” He removes the aspect that they’re some enigma, simplifies the source of their strange inclinations, and brings them out.

Shortly after, likely per Mrs. Hart’s request, Hart invites Cohle out to a double date so that he might set up Mrs. Hart’s friend Jennifer with Cohle — he’s convinced that Cohle needs the boundaries Hart is provided by having a family. The problem is that while they’re out on this “fun” date, Hart is drawn away from the table when he sees his mistress out on a date. He steals away and pulls her to the bar where he demands to know what she’s doing, she states that their relationship ran its course and that he can’t be jealous – after all, he is married and still having sex with his wife. His precious boundaries are shattered when he can’t control his young girlfriend – she declares she’s done with him and it unravels him.

Cut to the dance floor, where Cohle is briefly pantomiming living within those boundaries, making small talk with Jennifer and telling her about his travels in Alaska and France. Afterward, Marty is wasted and pounding down his girlfriend’s door as 2012 Marty tells the detectives about the importance of rules and how they “describe the shape of things.” Except that clearly, the murder investigation at hand is outside of the rules — there is no way they can describe the shape of things. This is juxtaposed with Cohle’s 2012 assertion that he’s never been in a room with a suspect more than 10 minutes without knowing whether or not he was guilty — his inability to live within boundaries like the religion Hart asserts keeps society on track is exactly what allows him to get to the actual truth of a situation.

It’s this ability to see through “the rules” that leads Cohle to a closed case murder which appears to share details with Dora’s ritualistic murder, suggesting that this is a “culture” of murder rather than a one-off. The new victim supposedly drowned in a flood, but had meth and LSD in her system (like Dora), was marked up by branches and twigs (like Dora’s dressings), and had a swirl tattoo on her bottom (again, like Dora). Finally, Hart seems to recognize that Cohle’s lack of boundaries just might be what solves this crime.

They hunt for leads by seeking out any friends their new-old victim might have had. Her grandfather suggests that they check out Reggie (Reginald, officially) LaDeux, the boy she ran away with. A few leads take them to her old school, which was a part of Rev. Tuttle’s program but has since become defunct, but ultimately, they find details about LaDeux that crack open the case and give them enough evidence to take to their captain.

LaDeux has just skipped parole, he was in prison for a few sexual crimes and for participating in the production of meth and LSD, and (for the big finish) he was cellmates with Dora’s husband in prison. Finally, Hart sees the wisdom of Cohle’s seeming madness — he’s the “bad man” to keep the other bad men “from the door.” They put out an APB on LaDeux and the episode cuts to Cohle in the future.

Exhibiting some of his “bad man” behavior, he cuts up his Lone Star cans into the shape of a woman or a victim, all the while describing his “locked room” theory. He says that you can see the look of relief and release on the faces of murder victims. Yes, they weren’t originally willing, but in their final moments, they were happy to give up the tight grip they have on “reality.” He says they’re released from “the dream… the dream of being a person” that we all have in a “locked room.” If we didn’t know better, Cohle would sound like the murderer himself, but it’s just his ability to cut through “reality” that lends him the capability of catching what he refers to as the “monster” at the end of the reality dream. As he describes this dream and its monster, we finally see what we can assume is our killer, from a distance.

He’s traipsing around the grounds of a rural compound, nearly naked, with ritual markings, a gas mask, and a machete. Cohle’s point of view may be terrifying, but clearly, his is the only mind capable of understanding a monster — or a man untethered from reality — like the man behind these killings.