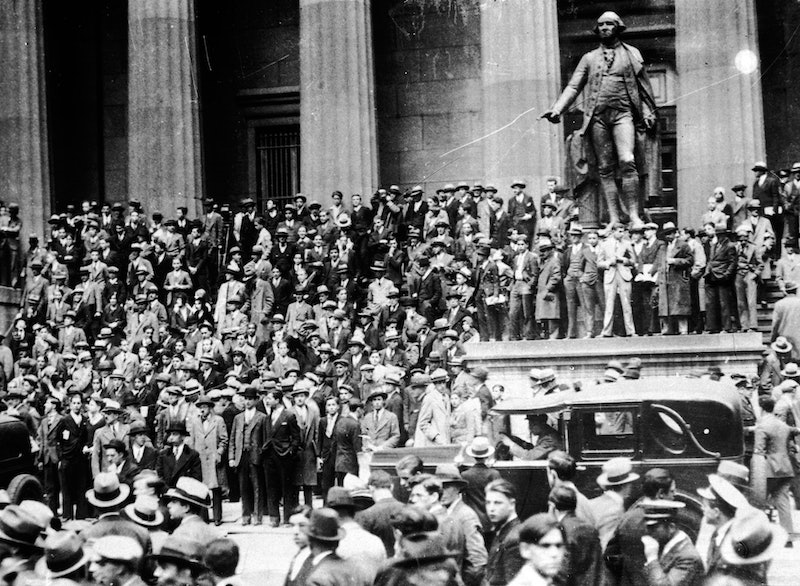 Beginning on Thursday, Oct. 24, 1929, the markets lost 11 percent of their value after heavy trading; similar losses continued on the following Monday and Tuesday. These days would each earn the prefix "Black" in the press before long, and would go down in history as the dawning days of the Great Depression. The Wall Street Crash of 1929 kicked off the Great Depression and brought the global financial system to its knees. The rapid and systemic nature of the collapse was predicated on the widespread practice of buying stock "on the margin"; that is, only buying a small amount of stock outright, with the remainder of the purchase financed through predicted, yet entirely hypothetical, future gains.

Buying stock on the margin drastically lowered the initial cost of buying into the stock market, thereby allowed increasing numbers of middle- and working-class citizens to participate in the heretofore unseen levels of financial prosperity during the interwar years. However, it also meant a massive increase in risk potential when brokers issued "margin calls," notices which mandated payment of the entire value of the shares immediately, sometimes with as little as 24 hours to do so. The massive uptick in margin calls resulted in a loss of $30 billion dollars over the course of Black Monday, Oct. 28, and Black Tuesday on the 29th.

In a rising market, margin calls could prove problematic to over-leveraged individual investors or brokerage firms. In a falling market, where the number of sellers is rapidly exceeding the number of buyers, each successive margin call causes the contraction to intensify. This was the situation that unfolded during the waning days of October 1929, ushering in a period of profound, systemic poverty that touched nearly every corner of human civilization on Earth.

Below, discover how the 1929 Wall Street Crash looked to photographers on the scene in Manhattan that week. Photos are arranged in chronological order, beginning on Black Thursday, Oct. 24, 1929.

Young runners and messengers from Wall Street brokerage firms huddle around a hard-to-obtain edition of a newspaper on Black Thursday, Oct. 24, 1929, as news of the crash begins to spread.

View from inside the neoclassical trading floor of the New York Stock Exchange on Black Thursday.

Outside of Federal Hall, George Washington looks over throngs of people filling Wall Street on Black Thursday. In the background is Trinity Episcopal, nicknamed "The Stockbroker's Church," a likely destination for some in the crowd after the events of the day.

Another angle of the chaos in the streets in the Financial District on Oct. 24, 1929. Two mounted police officers in the foreground keep watch over the traffic.

176 miles away from the epicenter of the crisis, depositors line up outside of the Millbury Savings Bank in Millbury, Massachusetts, on Black Thursday.

Employees at Harriman and Company work on Sunday, Oct. 27, 1929, to catch up and process trades from Friday and Saturday that still hadn't been executed.

Aerial view looking down onto the New York Stock Exchange building (lower left-hand side) on Oct. 29, 1929, after an attempt by wealthy investors coordinated by the Rockefeller family to halt the crash began.

Crowds gather outside the New York Stock Exchange on Wall Street in Manhattan on Oct. 31, 1929, one week after Black Thursday.

On Oct. 31, 1929, in a private club run by St Phalle, Ltd. in London, a young man on the phone with New York updates a chalkboard detailing the fallout from the crash as members look on. The proliferation of new technology, like the telephone, facilitated the expansion of new markets and financial instruments by drastically increasing the speed and volume of information flows worldwide.

With the creation of the Securities and Exchange Commission in 1934, many of the financial products and practices pushed by brokerages on Wall Street were outlawed or came under heavy regulation in order to prevent future system-wide crashes from happening. However, changing political attitudes and increasingly sophisticated trading models have chipped away at the regulatory power of the SEC, with many blaming the 2008 crash on the failure of the SEC to properly understand or regulate the derivatives market as it was emerging. While the possibility of a 1929-style stock market collapse may seem unlikely to some when faced with the incredible technological sophistication of our modern banking and finance system, the events of 1929 should serve as a grim reminder that what goes up can, eventually, come down.